This is a Go variant that could be implemented on a Go server.

Hu: Wild mode (W): An even game where the server makes the first three moves for each player randomly anywhere on third line or above. The players then continue playing from that position.

unkx80: How about only two moves per player. Alternatively the server should exclude positions like the following. =P 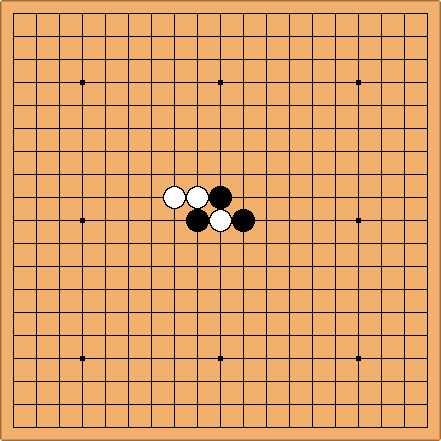 (Sebastian:) I love that idea! The way I would understand it is that they are completely random, so it is highly unlikely that the fuseki will be so intricate. Besides, I would even say the number of stones should also be somewhat random. Plus, they should include an appropriate number of handicap stones.

However, you raise a good point - it may be very unfair. Therefore, I would propose to implement a modification of the pie rule:

After the fuseki has been set up, White estimates a fair komi. Black then decides if she wants to accept playing black for this komi, or else the colors are switched. Handicap stones could be handled in several ways:

unkx80: How about we generalize it a little. Instead of fixing the number three, we allow the server to play n moves per player at random, say 1 <= n <= 10, where n is to be agreed by both players, but the position must be legal. Also Sebastian's komi idea is good, but allow negative komi, i.e. reverse komi.

Bill: How about this random pie variant? Black's first move is random, and there is no komi. Or, for handicaps, White's first move is random. (Isn't there something like that in checkers, where the opening is drawn from a hat?) Or, in any event, giving the first player one more random play than the second player.

PurpleHaze: Tournament checkers is played with a rule called: 3-move restriction. A card is drawn from a deck of all 3 move openings that do not lead to known forced wins (currently 144). When this rule is in effect games are always played in pairs where each player plays the drawn opening as white and as red, this compensates for the for the advantages (sometimes large) that an opening may give one side or the other.

OTeytaud: we tested random-openings with high number of random stones - but with an algorithm designed for ensuring a fair initial position (i.e. we randomly draw plenty of initial positions, and keep only those for which the winning rate is close to 50%).

Anonymous: A good thing about Wild Fuseki + Fair Komi is that perfect play will result in jigo (assuming a superko rule). It is also a tougher test of Go skill (joseki are out the window; good heuristics and improvisation are rewarded). If normal 19x19 Go is ever solved, Wild Fuseki (along with bigger board sizes) will present another challenge.