To be safe from capture, a group of stones needs two irremovable liberties. This is achieved by having two eyes. There are a few, comparatively rare exceptions, such as the situation described by the term two headed dragon.

In the example, the eyes are real eyes of size 1, in which the opponent cannot play (due to lack of liberties, sometimes called the 'suicide rule'). The situation becomes a little more difficult when the eyes are really eye spaces. If the player allows the opponent to play freely inside one of the eyespaces of a group, the status of the group may change.

Let's take this group for discussion:

The white group is still alive, but it is now tangled up in a seki with the black stones in its belly: if either player plays a, the other will capture the stones linked to it. Let's take a more extreme example, which may go wrong for beginners. 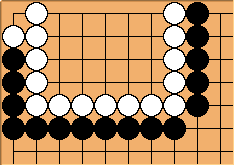 This White group is considered alive: it has one eye in the corner and a big eye space next to it. Technically, this eye space can be occupied with black stones, in a way that captures all white stones: 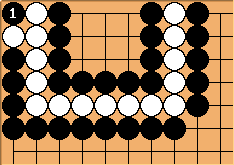 But such an event is very unlikely to occur, because of alternating play. White would have passed (or tenuki) up to 12 times in a row to get captured.

However, even with normal, alternating play, it is possible for black to build an unconditionally alive group inside the white enclosure, due to white mistakes in trying to block or kill black. Such a live black group kills the original white stones when it is extended to fill the entire large white enclosure.

A two-eye-formation can die under superko when filling one's own eye is a best available ko threat for retaining the possibility of killing a more valuable 1-eye-flaw. --Robert Jasiek