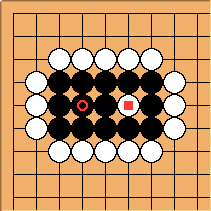 Based upon Alive#2, I strongly opine, if not declare, that a group is alive if, and only if, its death could only come at the hands of that group's color. In the diagram showing one simple example,

would illustrate the sole mechanism by which the two-eyed black group could meet its death.

. This would also be my answer to the argument TwoEyesCanDie. --ProtoDeuteric blubb: I am not sure if I understand the phrase "could only come at the hands that group's color" as intended. If it is meant to suggest that a group is alive iff it can die with the own color moving first only, it`s obviously not correct. Just consider the following (equally silly) case, where Black`s group is undoubtedly alive in the first place but spoils its own life later on: 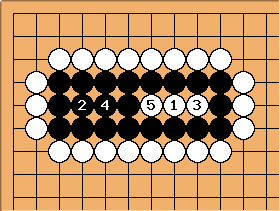 Edit: it occurs to me that if you correctly (in the situation) ignore a ko threat to kill an "alive" group, then you are not at fault but the alive group is nonetheless killed. I propose, as an alternate definition: A group is "alive" if, and only if, there is a refutation to every possible threat by the opponent to kill it. This seems more intuitive.

LukeNine45: An example to clarify. This group can't be killed unless black actively harms his own stones. White can't even make a ko threat. 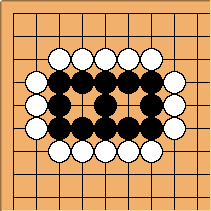 LukeNine45: This group could legitimately be killed if black ignores a ko threat against it. 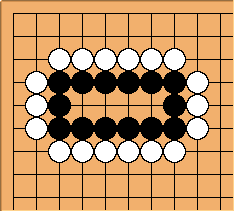 LukeNine45: This group is like the first one. White doesn't have even a single ko threat. Also, observe that if black is silly enough to play at a and then at b, the group becomes unsettled. White still would not have a ko threat; White should play at the vital point (c) to kill. Of course, in a game where black is filling his own eyes, white will probably not be in a hurry to waste stones killing black, when there's so many more useful things to do with them-- like testing their edibility. 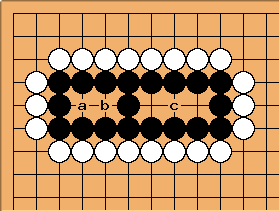