Paths: <= Tsumego From Games =>   ·   <= Forcing and initiative
Sub-page of TsumegoFromGames7 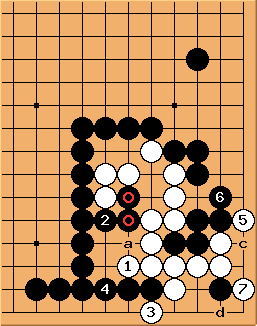 Jonathan Cano White 1 threatens to capture the marked black stones. If White captures these she has a second eye and is alive so Black defends at 2 (he could also defend by playing at a).

After 7, the points c and d are miai. 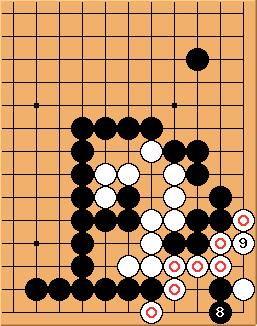 For example: if Black 8, White 9. In All about life and death volume one by Cho Chikun, the position of the marked white stones appears as "pattern 6" and is shown to be alive.

If you know this pattern is alive (i.e. if Black plays first, like at a White can still live) then the solution to this problem is not so hard.

I hope you enjoyed this problem.

Dieter found it in 5 seconds, but omitted 5 in the solution diagram. It is not needed for life but as kikashi before living it is OK I guess. Move 3 (in the first solution diagram) is the one that matters and is made possible by 1. The level of this problem is difficult to determine. I know 2 Dans who don't know about the L group and 9 kyus who do. 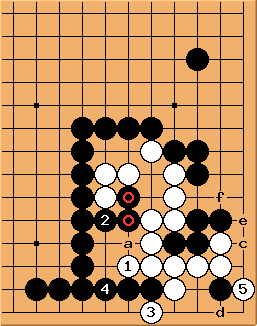 The points c and d are still miai. It is generally better to avoid unnecessary moves in sequences like this. Playing 5 in the previous solution (White e, Black f) squanders a kikashi that would serve as a nice threat should a ko arise. 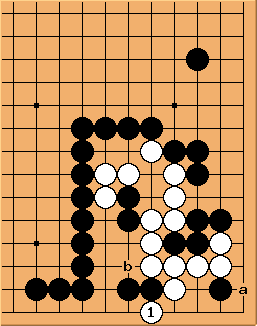 jesusin(3K): I had an idea similar to Dieter's. In the solution I would omit 1. White 3 is sente even if 1-2 have not been exchanged. In the diagram "Other solution" below White 1 makes a and b miai.

Jonathan Cano: Cool! Occam's razor cuts away yet another unnecessary move! If Black responds to 1 at b this looks like a territorial loss for White, compared to White playing at b first.

In the actual game I did not realize that "just 1" would work so I didn't have the chance to contrast its merits with the original solution.

Aside from the question of timing, there are a couple of problems with the proposed solution. 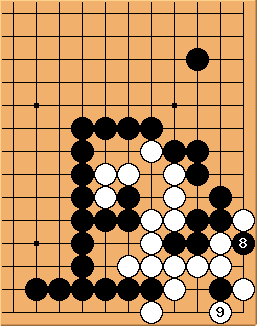 Jonathan Cano: OK, OK, for an endgame bean counter like yourself 8 and 9 may not be miai but for a poor sod (like me) just trying to determine life & death status calling 8 & 9 miai for L&D purposes is good enough.

Of course, once status has been determined (White can live), then we should get into the matter of how to play best (as you have). 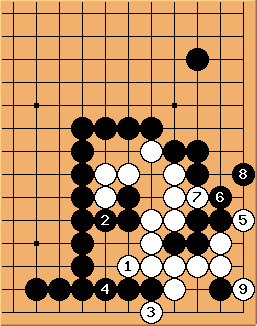 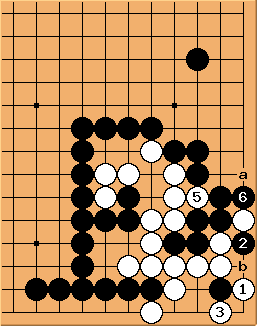 If White omits Black 5 before playing Black 1, Black will play Black 2 - White 3. Later, if White plays White 5 Black does not have to play at a but can capture White's stone with Black 6. After White 1, Black 2 and White 5 are double sente. After Black 2 - White 3, White b is better than White 5. That mitigate's White's loss from not playing White 5 first. It comes to only 1/6 of a point, but hey!

Jonathan Cano: Bill, which solution do you think is best? I know this can vary according to circumstances so please describe a few scenarios in which different sequences are best. For example, Get it while you can seems to maximize White's local score (is this the best variation for this purpose) but is this also the best solution if White is concerned that she may have to fight a ko later? 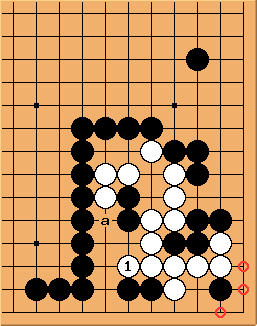 Well, really: White's alive, and White's threat to take a couple of stones is nothing compared to Black's threat to kill. :-)

Jonathan Cano: to put it in plain English, since the threat to capture two black stones (with White a) is so small (5 points? -- how do you get 8 points sente above?),

(Bill: Add the three marked points in the corner.)

it is very likely Black should switch elsewhere. 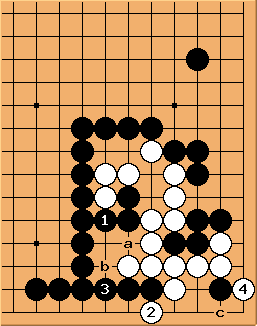 Bill: Black a is the same size as Black 1, but leaves a ko threat behind (in most variations) at 1. If White omits the kikashi, White 2 - Black 3, before White 4, Black can later play sente at b, threatening to kill at c. Omitting the kikashi costs more than 1 point. 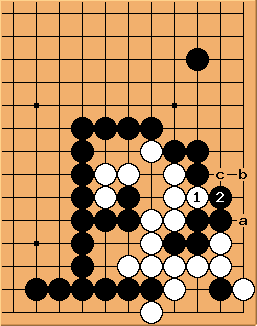 Now if White a, Black b. Here c is a ko threat. 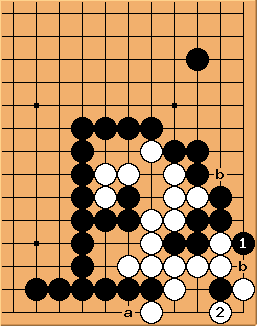 In this sequence each player preserves his or her aji as long as possible.