Opposite of loose, a tight play is adjacent to another stone.

Chris Hayashida: This might be considered the same as a "slow" move.

xela: I think there's a subtle distinction between loose/tight and fast/slow, but I'm not sure how to verbalise it. Does anyone have any good examples? Also, I'm not sure if a tight play is necessarily adjacent to another stone.

kb: Sure. After the attach and draw back joseki below, White has a choice of where to play

, depending on the stones on the rest of the board.

Playing in this way is the normal, standard joseki. This is neither loose nor tight, nor fast nor slow in this context.

is loose - Black is so strong, especially with

invites an invasion. This play would not necessarily be considered fast, though - it is more necessary than fast, and should be considered honte.

MrTenuki (KGS 3k): On a side note, I have a question. Can we say that

is wrong with the two

kb: There is no reason to pincer - Black's left stones are strong and need no help being more strong. Black gets a very large corner from this joseki, bigger than the side. If there is a lot of Black thickness to attack with, or if the Black stones on the left are high, then maybe pincering is an option. Generally neither player wants to play close to strong groups.

is tight. This is a better move in this context - White should have no complaint about being overconcentrated because of Black's strength in this area. This play is not slow as it is necessary, as a Black stone at

or on the 4th line would be a brutal attack on the three White stones. 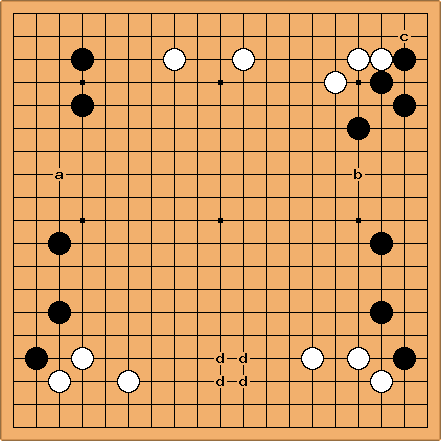 Black to play. A move around a, b, or c is too slow, as an invasion around d is fast (and better) - the best way to keep the balance. 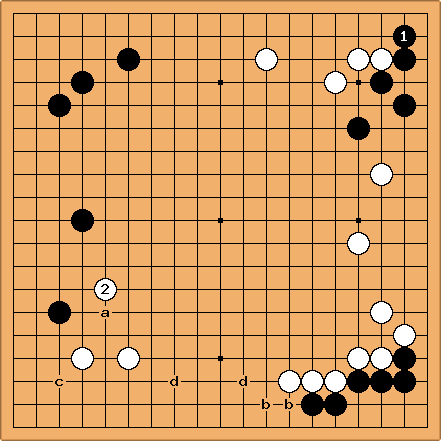 This is a different context for the word tight than discussed above. With roughly the same position in the top right,

could be called tight because it totally secures the top right corner. A focal play around a also is a good play (since

helps expand the White moyo), but Black shouldn't fear it too much since plays around b, c, or even d are still available.

From Rob van Zeist's article Seen on the Net in Go World issue 113, 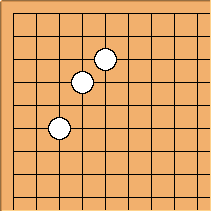 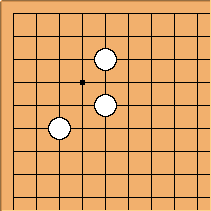 And here is an example of different pincers: 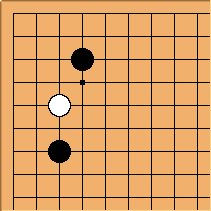 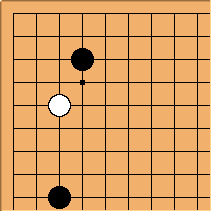