On this page you can find, add and discuss questions to the book Tesuji.

If eventually a problem is generally agreed to be a mistake, please move it the errata subpage. 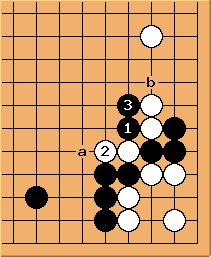 The text says, Black´s play only helps if the ladder on a works... 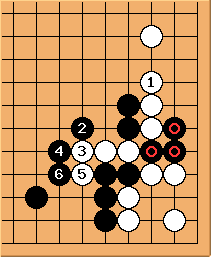 Is it not sufficient to create a loose ladder here for capturing the cutting stones (if White does not want to give up the right side), since the marked Black group has enough liberties? SvenB 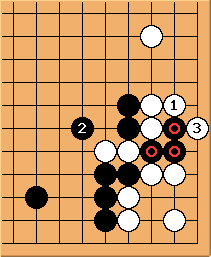 crux: No, White will of course play like this instead. 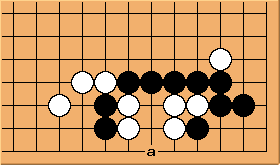 Black to play and win. 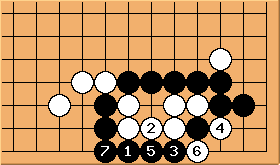 The solution given is fine... here my 15k-question of the day:

Can Black also play the first move on 5 ("a" in the original diagram)? SvenB 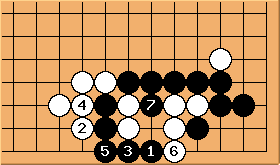 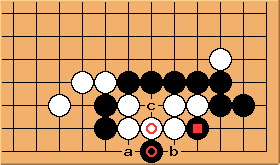 If it was only for the liberties... But there's another weakness... Reuven 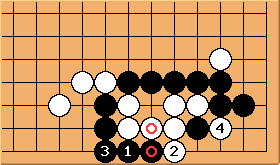 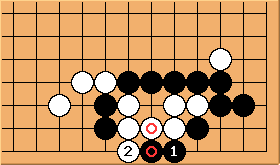 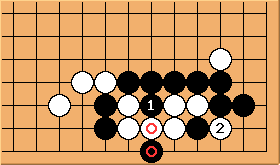 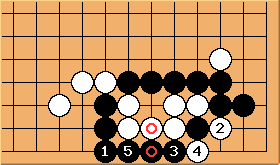 What about this one as an answer to the marked white stone? (Leads to the original solution, admittedly :-) SvenB

Looks to me like the given solution is not achieving anything for White? 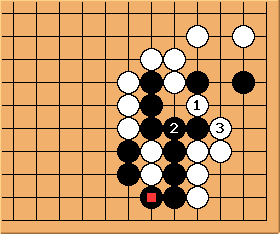 Uberdude Can you clarify your point: is the marked black stone played as move 4 in the sequence, or before 1? It looks to me like white has achieved cutting off the 2 black stones on the side, which gains some points and also makes the corner totally safe. I'm not clear what the starting position was, but it might have been black was able to save those 2 stones in sente if white didn't play first as it would threaten to kill the white corner. That would make capturing the 2 stones a reverse sente rather than a simple gote.

Smejko The task for the diagrams in this section of the book is given as: "The object in each is capture, and the target will always consist of at least two enemy stones". Then the solution for the diagram is given as moves 1 to 3. But in the resulting position, black can play the marked stone (added by me) as move 4 in the sequence. And it is the white stones that get captured. Your evaluation of the position is certainly correct, but a little bit "too abstract" for a chapter dealing with capturing the cutting stones, isn't it?

Uberdude Ah, black doesn't need to play your marked stone for 4, those white stones cannot escape as black will capture them in a ladder. Their purpose was to provide aji to prevent black answering 1 with 2 at 3, as then white would use them to play at 2, and black can't capture 2 as it would be a snapback. So the problem was white to play and capture at least 2 black stones. Those 2 white stones were already captured, but served useful for white to capture the 2 black stones. I reproduce the starting position for clarity below. The problem is correct, and white's wedge is indeed a good tesuji.

Smejko So the target of the whole white operation are the two marked black stones? (I took the liberty to mark them in your diagram). Do they count as "cutting stones" too? What is it that they "cut"? My understanding so far has been that "cutting" means contact play separating two enemy groups. 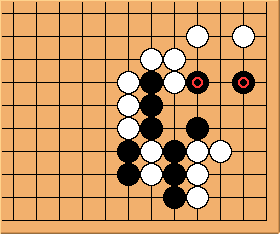 Uberdude: Yes exactly. I can understand your confusion when they are described as cutting stones, as they aren't the typical cutting stones in contact with the 2 groups they are cutting. I might call them separating stones to make that clearer: they separate the white corner from the outside group. An implicit part of this problem, which is perhaps not obvious for kyu or even low dan players, is that if black plays 1 below and white ignores, then black can kill the white corner (which is a shape related to the carpenter's square, one of the most complex standard corner shapes). So white should answer 1 and that means black fixes the wedge weakness and thus saves the 2 stones in sente.

Smejko Thank you for taking so much time to explain the problem. Your help is appreciated! With your explanations, the position starts making sense to me now. 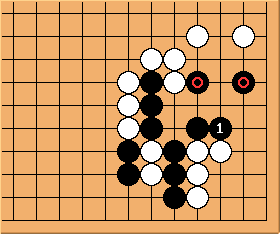