A discussion of the situation in Teaching Game 53 after the first 40 moves.

Dave, if this game would be continued by two players of equal strength (and with normal komi), White would win, wouldn't she? At what point has Black lost the advantage of his two stones? mat

Probably it might be instructive for me if you (or anybody else) could give a short analysis of the current situation. I find it very difficult to learn when action and feedback (in terms of territory/life outcome) are separated by lots of moves mat 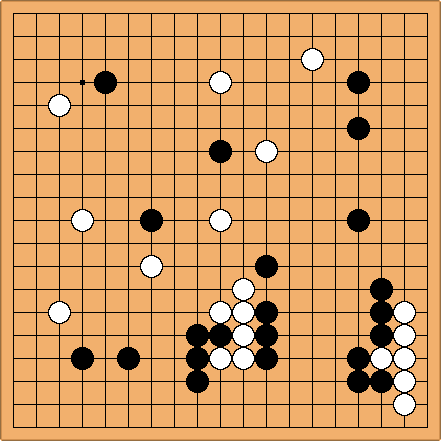 1. What if there were no komi?

Dave: First of all I think that the situation is still unclear. It is important to realize that except for the lower right corner White has no territory yet, just loose frameworks. Black is in the same situation except that his frameworks are smaller but tighter.

Having said that, I would rather be playing White than Black if there were no komi. The reason is that Black's last three moves have done two things: 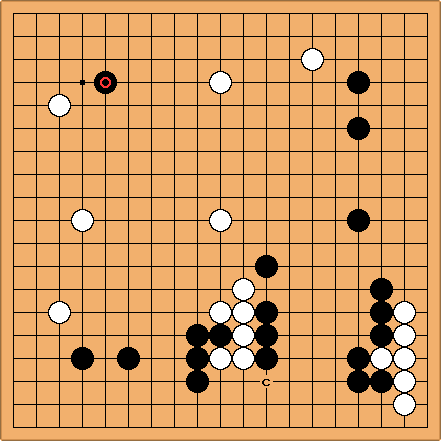 Dave: Compare the situation if Black had played at the marked stone immediately (move 36) instead of making the two exchanges in the center first. Black is still playing within a white framework. However, White is much thinner. If Black lives along the upper side (the common result after playing the marked stone), White's prospects in the center are pretty limited. In the game, Black has already jumped into the center and has to worry about the possibility that one or both of the center stones will be swallowed up along the way. If that happens then White has been given essentially two free moves to build up the center framework. That is as big as the two original handicap stones right there. 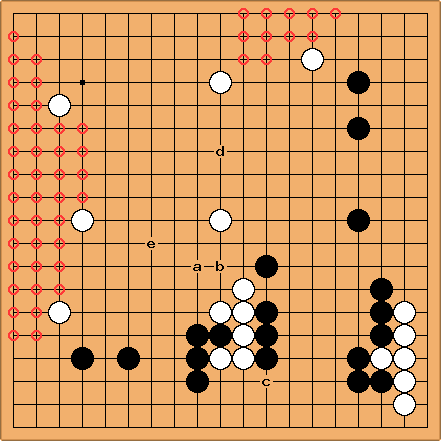 Dave: I felt that the big question after Black 35 (when Black ended in gote in the lower right) was whether or not Black could profitably attack the central white stones. White has ended up with a fairly ugly shape that is only loosely connected out. The question is, "if Black attacks, what can White do?" Did you think about this at the time and if so what were your thoughts?

I liked Black 36 and Black 38 because it was at the border of our spheres of influence (at least I thought it was)... To be honest I thought you would defend Black 36 from the inside to give me less room on the upper side...

Dave If I were honest I probably would have defended from the inside :-). But facing a 50-point komi that would have been hopeless.

Would d or e have been better? 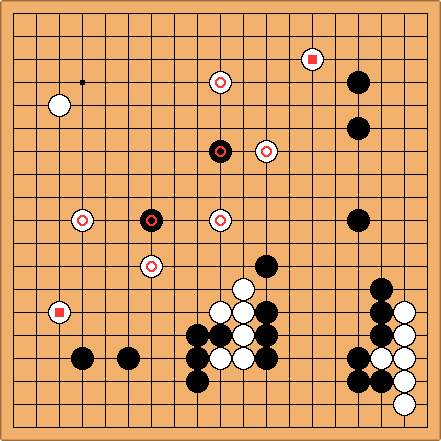 I felt that I had to answer Black 36 on the outside because of the komi. By Black 38 I felt that playing on the outside was too big an opportunity to miss. The marked white stones combine nicely to surround Black. The black stones are not caught yet: White's net is far too loose for that. We can definitely count the last two black stones as thank you moves. Black 38 was especially so since White 39 clearly helped strengthen my center stones.

Playing e above would have been more reasonable. I think that e is more forceful than d because it threatens the gap between my bottom group and the tengen stone. But even e is a thin move. It stretches a long way from the lower side black stones. I am likely to try to cut in behind it (again because of the komi, I almost have to).

In assessing the situation after White 35, perhaps the most important perception that Black could have is that White is weak everywhere. At the same time, White is "strong" - in the sense of fighting strength (that is why there is a handicap :-). Black should not want to end up in hard fights. Black should instead want to force White to react by threatening the weak white stones. There is no rush to do so right away, however, because White can not strengthen all the thin areas at the same time.

The second most important perception that Black can have is the actual size of the 50-point komi. Take the board diagram after White 35 and mark off 50 points that you are willing to let White have in exchange for the komi.

mat OK, I have marked 50 points. I should be able to live at the upper side, so all I have to do is to restrict your territory in the middle to the size of mine... Doesn't sound too hard, however my territory isn't settled so far.

Dave your territory isn't settled but neither is mine. If you keep that in mind and think about achieving a proper exchange (making some territory for yourself if I make some for myself or destroying some of mine if I destroy some of yours) section by section around the board, you should be OK.

You called Black 36 and Black 38 thank you moves? Is there something wrong with the proverb "play at the border of the spheres of influence"? Or did I miscalculate your sphere of influence? Isn't the fact that you considered defending from inside (if there were no komi) a sign that Black is not overstretched (forget about the difference in strength for a moment)? So would you still call Black 36 and Black 38 "thank you moves" if there were no komi? 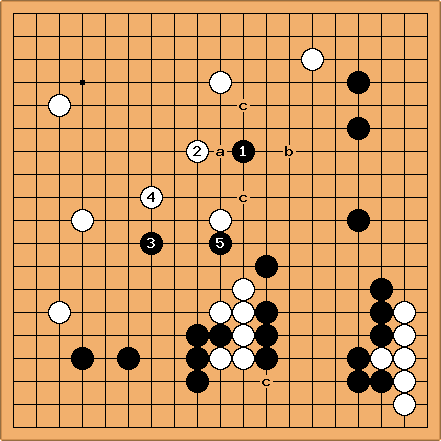 Dave Consider the difference between playing 36 (a) in the game and 1 here. It is not impossible that White would decide to answer at b instead of 2 but it would be very much a handicap-game move. Black could answer that by jumping directly in to 2 without worrying too much since he has moves like the points marked c to help him escape later. If instead of b White does answer along "the border" at 2 and Black follows with 3, the position of the black stones vis-a-vis White's center group is completely different. Instead of having strengthened the white clump, Black has nearly surrounded them. If Black played something like 4, Black can probably play to cut them directly at 5.

The 36 and 38 that you played in the game went too far into the white framework in my opinion. They may still survive (if all three stones inside my framework survive you will have an excellent chance to win). On the other hand, if they do not survive, they will likely turn out to be a free gift to White since they have allowed White to wall off the sphere of influence more rapidly than if Black had gone straight to the upper left corner.

Bill: If I may add my 2 cents worth. I agree that Black 36 and Black 38 are too deep. Even the distant white stones marked with a square affect the border.
However, I like the spirit of those moves, and think that they bode well for future progress in go. :-)