Strike At The Waist Of The Keima / Discussion

unkx80: The keima-cutting technique described on this page can be described simply by the Chinese term 跨断 (kua1 duan4). Is there a much less cumbersome English term?

Dieter: I have executed Bob's suggestion.

unkx80: Thanks. I would like to seek more clarification though. 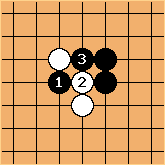 Alex: Personally, I would say "

strikes across the keima and

, Black cuts at the waist of the keima." I've never heard "waist cut" before, but I would have understood it to mean "cut at the waist (of keima)" if someone used it around me. 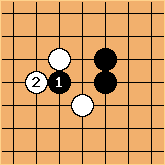 So I do not like the term, waist cut, for tsukekoshi. Where's the cut? Besides, it does not appear in The Go Player's Almanac.

Bob Myers: Personally I think waist cut is a terse, useful term, and people I know use it, but how about waist attachment, which in any case is a more accurate rendering of the Japanese? The Almanac says it is "incorrect" to translate tsuke-koshi as striking at the waist of the knight's move, and I assume they are referring to the difference between waist and koshi, but since we do not have koshi on our bodies here in the West, waist seems eminently reasonable. The Almanac's solution is strike across the knight's move, which seems forced and unnatural.

Bill: Maybe waist cut should become the standard English term for tsukekoshi. I agree about the awkwardness of the phrase in the almanac.

But maybe not. Waist cut makes me think of this: 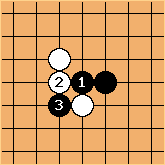 In any event, we are not there yet. My problem with the current Cut across page on SL is that it suggests that waist cut is the standard term.

I used to call tsukekoshi waist blow or waist hit, but that's just me. How about waist strike?

Bob Myers: Did you miss the proposal for waist attachment, or do you not like it?

Bill: I didn't mean to ignore your suggestion, Bob. I think it's a definite improvement over waist cut. :-)

Bob Myers: OK, let's request the powers that be to make yet another change which is to change the title of Cut across to Waist Attachment.

Bill: Why use a non-standard term for the main page title? Let them be aliases. Unfortunately, we do not yet have a standard English term for tsukekoshi. But I do not think it is up to you and me to decide on one. One will emerge and become standard in time.

unkx80: Yes, it is not up to me to decide also. I did not miss the waist attachment suggestion. However, my purpose of compiling the Chinese terms and their English counterparts is not to invent new terms, but to use what is already commonly used.

unkx80: As usual, people cannot agree on terminology, which is just one of the reasons that make natural language processing so difficult. But still, many thanks for the suggestions.

Maybe I'll enter 跨 as attach at waist of knight's move and 跨断 as waist cut. 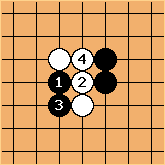 By the way, the solution to Kyu Exercise 50 contained a tsuke-koshi / 跨 but no cut / 断, which means something that looks like this diagram.

Another Chinese term which I do not know how to make an entry is 挤 (ji3), literally squeeze, but squeeze here refers to the squeeze tesuji which turns a group into a dumpling shape, while 挤 only means something like a butt into a diagonal connection.

Dieter: There is something that strikes me as unfair about the statement that the tsukekoshi is no cut. Here is another example: 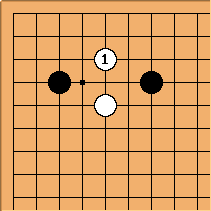 I do believe we say that Black has been cut. However, ... 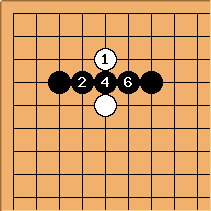 If White decides the cut is not that important anymore, she can allow Black to restore the connection.

Something similar has happened here. I do believe

is a kind of cut, but indeed the follow-up doesn't carry through.

Alex: Going by what I see in books, I've always understood "cut" to mean a solid cut, where connection can only be restored by capturing the cutting stones (or, I suppose, going around them). For a "cut" where connection may be restored if the opponent ignores a local move, I usually use (and see) "separate."

Bill: Yes, separate is the more general, non-technical term. Cut is the technical term for a kind of separation. E. g., 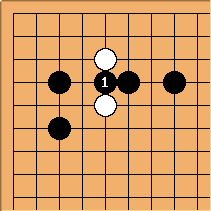 separates the White stones, but it is not a cut. It is a de.

John F. I don't like waist cut as it sounds ugly to me and there is no waist involved anyway. The Japanese koshi here means going across, and the idea is cutting across by means of an attachment. I'd say "cutting across" works fine.

But the point I really want to make is that if people want to discuss go terms (I've always been a fan of this but I've found the SL discussions too rambling) it would be better to set up some framework first.

For example, there is the question of intent. If you propose a term:

There are many, many more things that would go into a framework, but to confine the discussion to just the above and to tsukekoshi, if I was trying to convey only the meaning of the Japanese, I'd say something like the above (cutting across by attaching). If I was recommending an English word to a translator, I'd say just 'cut across' because that is idiomatic and clear English (unlike waist cut) and it could be used by translators from Japanese, Korean or Chinese, and in turn it is an easy term for people to adapt when translating from English. If anyone says that 'cut across' could easily refer to some other position, well - yes - but so could the Japanese tsukekoshi to a non-expert go player. Ultimately names alone don't define anything - you have to combine naming with pointing. If I had to suggest a name for this manoeuvre from scratch, in English, I'd prefer to sit that one out.

I can't imagine we would ever get anything like a standards committee operating, so no framework will ever get composed. But in its absence, I still thing it would be helpful if contributors did make a declaration of what they hope to achieve when they are making a particular comment.

By way of illustration of that, if I was introducing a proposal for tsukekoshi I might couch it in the following terms:

QUOTE I am especially interested in this term as a translator. I generally favour English terms if possible. In this case there is no uniformity among Japanese, Korean and Chinese, so to stick with either the Japanese term or to translate it directly is to ignore the needs and contributions of the other two languages. In any case there is no neat translation of the term direct from Japanese. The neatest equivalent might be from the Chinese = to straddle. However, that loses part of the Japanese meaning. So an English equivalent is probably called for. As it happens, 'cut across' seems to fit the bill. There are several things in its favour. In its own right it is idiomatic and clear. But for a translator it has the added benefit that it is one of those terms that can easily be used as a noun or a verb. Since it is characterstic of Japanese and Korean to use verbal nouns for go terms, and in Chinese word classes are fluid anyway, this term 'cut across' meets all a translator's needs. Furthermore, it contains a nuance of movement. Tsukekoshi does not describe the static end result. It refers to a dynamic manoeuvre. Cutting across retains that idea. UNQUOTE

Sorry to belabour it a little, but I really do think there are useful lessons there for discussion of any Go terms.

Bob Myers: I'd like to thank John for his contribution of a framework for discussing go terminology, containing elements that are certainly often missing from such discussions, including my own.

In this case, we are looking for an English word to be used to convey the precise meaning of tsukekoshi, by translators as well as authors, teachers, and players.

I can't agree with the proposal for "cut across". First, as someone pointed above, this is not a cut. That particular objection could be dealt with by replacing "cut" with something else, such as "attach", yielding "attach across".

But any compound using "across" has the potential defect of being too generic. John says tsukekoshi is generic too, and it's true that tsukekoshi is composed of everyday Japanese words, but its exact meaning--to attach on the "far side" of a knight's move--is quickly learned by any Japanese go player and I cannot imagine it being used in any other context. So I think we need a word that is more distinct and identifiable.

The key elements here are the action and the location. The action is attaching. The location is the point on the "far" side of the inside of the knight's move. (The "far" is vaguely conveyed by the koshi part of the Japanese word.) The location can be indicated either by a noun ("waist") or by an adverb expressing its relationship to the existing stones ("across").

One might consider combining action and location with something like "split", as in "splitting attachment", or "splitting the knight's move", but this proposal might be disqualified by the fact that split already has other usages. It also suffers from its inability to stand on its own as a verb; you would have to say "make the splitting attachment".

Until someone comes up with a better way to refer to the point of attachment, or a new proposal altogether, I'd have to say "waist attachment" is the best we have. There seems to be some opposition to this, though, which it would be great if someone could amplify on the reasons for.

Dieter: To answer John's question(s): my interest is 1)understanding Go better and 2) create a platform for common speech, which in turn will help me understand Go. Recently I have come to understand that a group can be strong i.e. almost alive, that empty areas in the vicinity of (strong) groups can be seen as a zone of influence and that a player's game can have an overall strength in the sense that there are little ko-threats against him and that he can expect extra profit from the fact that his hands are untied. If we find terms for these three aspects, say, strength, influence and thickness, I do not care so much anymore which part of atsumi or atsusa translates into these terms. But, as we rely a lot on non-English material to enhance our knowledge, we need to make the terms so that translators have an easier job.

For those who say there's no cut involved, you could translate it directly and go for "attach across keima." Since the third move is a cut, cutting across seems natural enough to me though. Anyway anything involving a waist sounds like a silly mistranslation to me.

Bill: I have a new suggestion for an English term: Crossover attachment. Forget waist!