In a Nine or Eight stone Handicap Game how do most people start out? I'm guessing that in the early stages of the game 8 and 9 stone handicaps are pretty much the same. 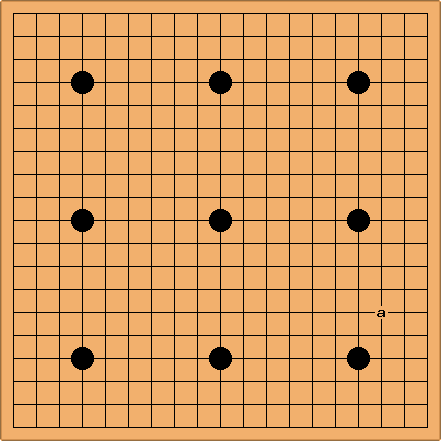 It would seem in my limited experience that a is a popular first move. and the standard joseki is followed for this: - 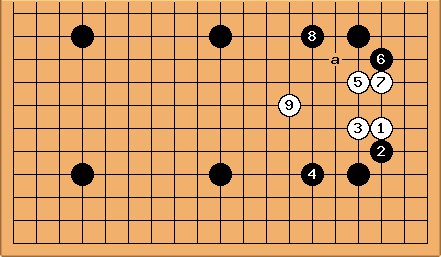 This agreeably is not too good for W - and when I'm playing W and this happens to me I normally cringe a little - but this is a nine stone handicap game after all. I've seen Charles omit

and jump straight to

in some games in the club, this does leave a black play at

as a potential thorn, but seems to give a lighter shape to white's stones.

is too passive right at the start of a game.

played at a, and will probably research that next.

Paul Clarke: In nine stone games I don't get

played against me very often (though I do in four stone games, where it's a mistake). Playing out the joseki sequence here seems very heavy; I'd probably tenuki after

and approach the top right, looking to start a fight - the bit of extra thickness that the

exchange has given me might come in useful, e.g.: 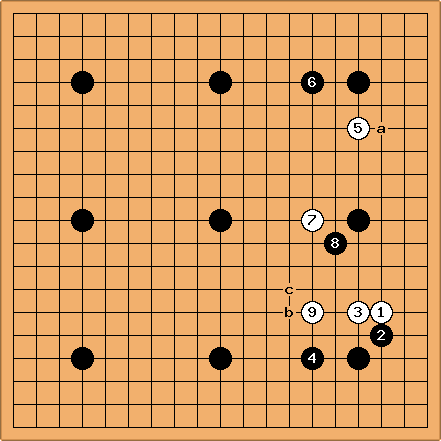 chrisg Just looked with kombilo at a few games, and it would appear that in the situation

there's a couple of games with a and one with b. So this looks like pretty much the same idea (as with Charles's c). I'd always been too worried about my stones to tenuki after

, but I suppose if I do then I might learn something. Charles One of the interesting challenges for White in a nine-stone game is to try a strategy involving sacrificing the

group. Obviously this means trying to induce Black to capture them on a small scale. Obviously, too, if White just tries for a quick life then this strategy doesn't even come up: one sign that White is playing in too limited a way.

From the point of view of sanrensei this is the immediate life line, anyway:

This is a pro move, so it is worth contemplating why the fourth line move is considered normal. 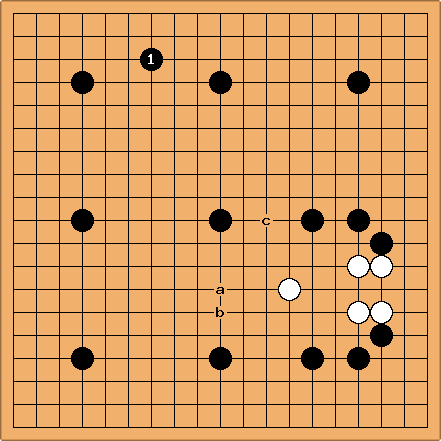 Let us suppose that B tenuki's at

, given that white's mission is to split Black's stones apart in the early stages, where should white play next?

Perhaps separate pages should be used for variations, but they can be split up at a later date if this idea proves to be a good one.

would never occur to me; as Black I'd want to play a but would more likely choose the safer b. c is also tempting.

More generally, my policy as black at 7 or 9 is "When in doubt, play 10,6". There's a proverb about the one-point jump never being bad and if you have tengen, methinks it is better. I'd love to hear stronger players comments on this. 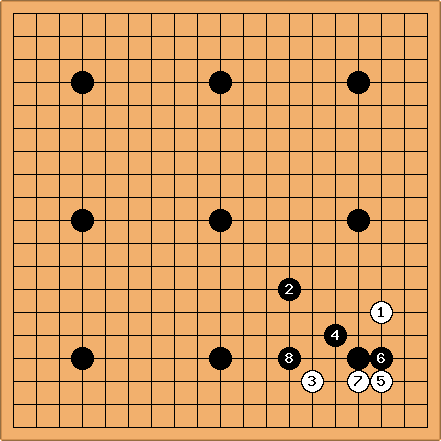 Does anyone have any thoughts on the merits of suggesting beginners should try something more unorthodox than the normal responses? In this pattern Black obtains a fairly standard sort of position. The differences are

jantiff: I tried the following quite a few times in high handicap games, as a change from the set patterns. 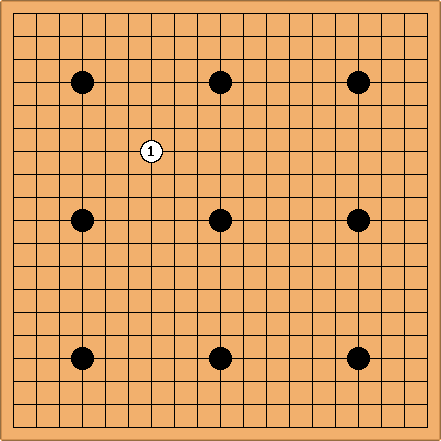 The idea is to gain early central influence - like in this example.

Kronstadt?: I recently played a game with 9 stones against a 6 dan player who liked to approach the corner stone as follows: 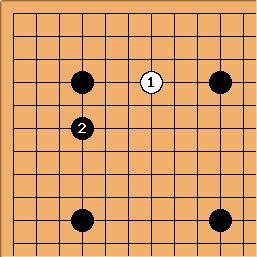 When I mentioned that I was used to the knights move approach my opponent said that he found the knights move "too dangerous" in handicap games. This approach seemed to work quite well for white. Does anyone have suggestions about playing out appropriate responses?

IanDavis Generally I play at 2 after 1, this is quite tight and prepares to severely attack the white stone.

JohnAspinall When Michael Redmond visited the MGA 3-4 years ago, he used this opening in a 9-stone game.

Bob McGuigan: In 1987, when I was 1-dan, I played an eight stone game with Jiang Zhujiu (now 9p, then 8p) during his first visit to the U.S.A. His first move was on the center point. Obviously this is not available for white in a 9-stone game but it makes some sense since the center stone is a ladder breaker for all the corners at once.