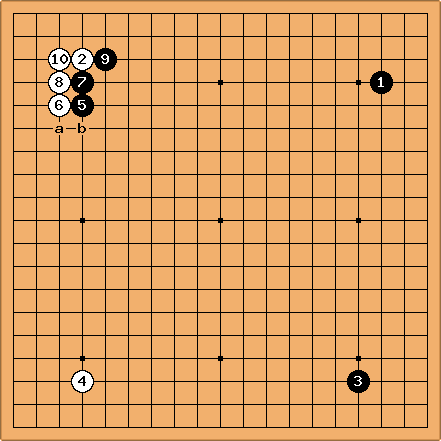 : opening at komoku is the fashion.The rest of the opening moves were all second choice to me.

: 13 games in gobase's database. I didn't expect the avalanche, but a or b instead.

being on this side's 4th line, I expected

John F. What you haven't said, Dieter, is that (using GoGoD data where we have 12 matches) is that a occurs once and b occurs once, so the professional common-sense seems to be to play the avalanche. But, even if for slightly different reasons, I must say I share your surprise that such ordinary looking moves and an ordinary looking fuseki seem so rare, A case for Charles Matthews, I'd say.

Bill: As for the hane at a, that joseki was already being questioned in print when I was learning go. 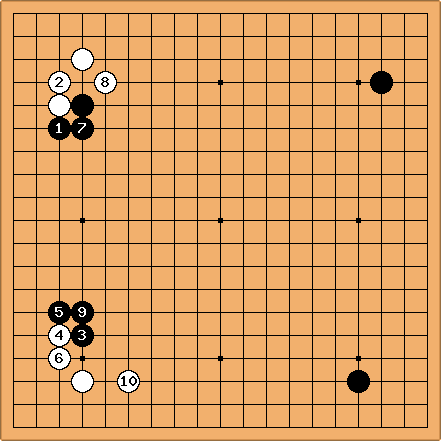 But this sequence, through

in the next diagram, was being played against White's mukai komoku. Takagawa, for one, played it. (See his Fuseki Dictionary.) 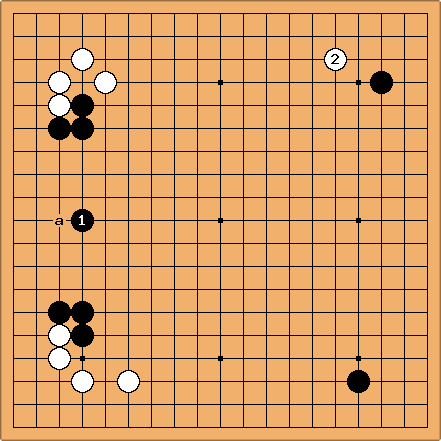 was considered efficient. (It does improve on Ba, and serves as an extension for both Black walls.) However, Go Seigen has criticized Black's plan in 21st Century Go, showing how Black falls behind. Perhaps other pros have been critical as well. 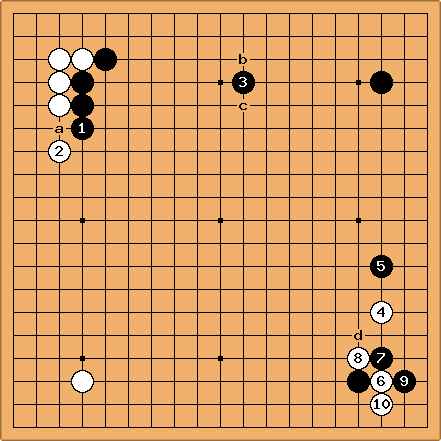 are forced moves, completing the joseki. Both White's hane at

or Black's magari at a would be unbearable.

I got the direction correct, but missed the spot it by one space.

at b would allow a great cap at c.

phenomene: The position on the upper side was played in the Fan Hui 2p-Asai Hideki 6d (aka intetsu 9d on KGS) game in 2003 Paris tournament with

at b. Comment from the players after the game: "b is too low, it should be at

spot on ! White doesn't want to be pincered. When

pincers anyway, there is more room to settle in the corner.

Note by Jan van Rongen: The position before

occurred already in the second game of Pak Yeong-hun in the semi-final of this Samsung Cup. There his opponent (Xie) played d . Cho also played against a similar fuseki in the first game of the semi-final against Hu, who had played

in the first diagram on hoshi. 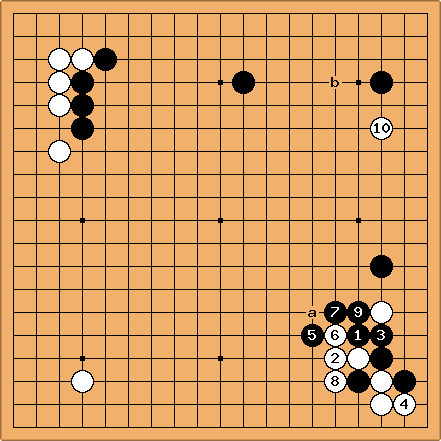 completes the joseki but Black continues up till

I expected White to cut at a. Second idea b and only third

, with a little help from the SI.

is an example of an invasion on the widest space.

Dave This game can be perhaps be better understood with a little context added. It looks like Pak switched to

pretty much exclusively earlier in 2003. Prior to that he usually opened with

at 4-4. His intent seems to be to play a mini-chinese. 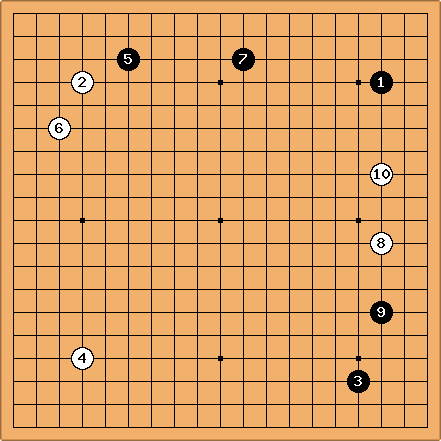 This is the way Pak's game against An Cho-yeong in the BC Card Cup began two weeks before the Samsung match.

In the first game of the Samsung match, Cho played Pak's favorite opening against him. 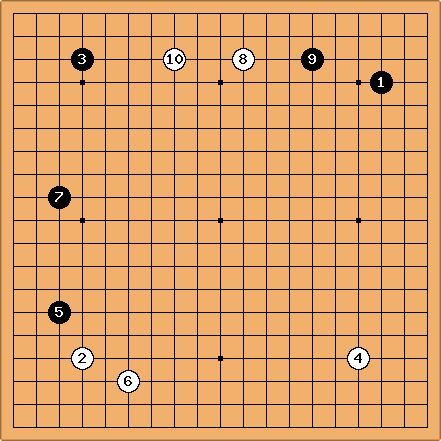 This was not necessarily the smartest choice. Pak beat An by 3.5 as Black and beat Cho by 4.5 as White from the same position. :-)

In both the second and third games Cho held White. He chose two different methods of avoiding the mini-chinese. 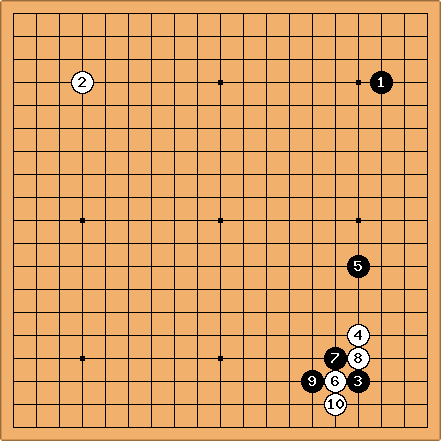 immediately breaks the mini-chinese pattern. However... 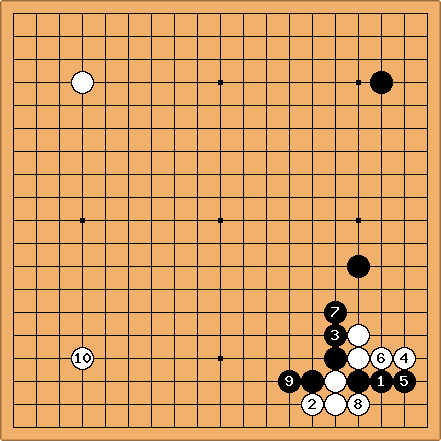 After the joseki in the lower right ends with White having sente, Cho decided to play in the lower left. So... 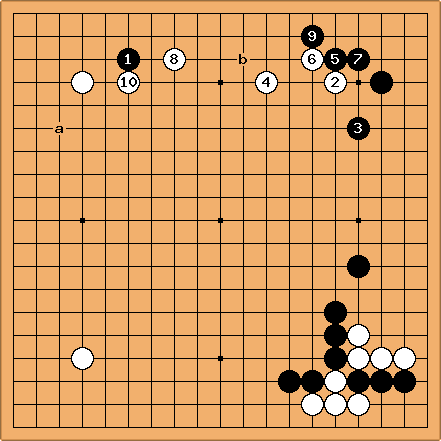 Black was able to play

here after all. Now if W answered at a, Black would have been able to play b if he chose. It looks to me as though the development in the bottom right corner would have worked well with the mini-chinese framework. (Of course I have no idea whether a top pro would see it the same way :-)

In any case, White played the approach at

instead of answering Black's move in the upper left. White played lightly in the upper right and took sente to pincer

at komoku in the upper left which immediately prevents the mini-chinese. However, after Black chooses the avalanche pattern a situation arises that is similar in some ways to the mini-chinese... 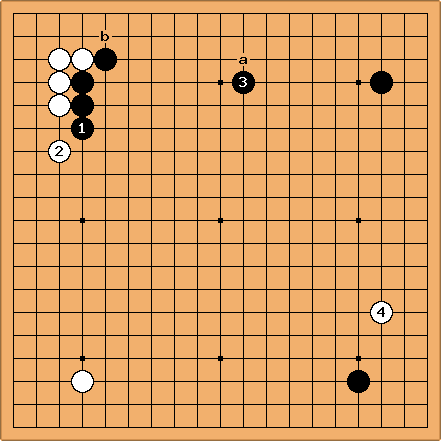 here sets up a high chinese relationship in the upper right. Despite the comment above from the Paris tournament, the low play at a is somewhat more common in professional play. But perhaps

is better balanced. The formation along the upper side has appeared more often in games where the Black stone in the lower right is on 4-4. In such cases, perhaps Black can play a without ending up too low across the whole board. Who knows :-) 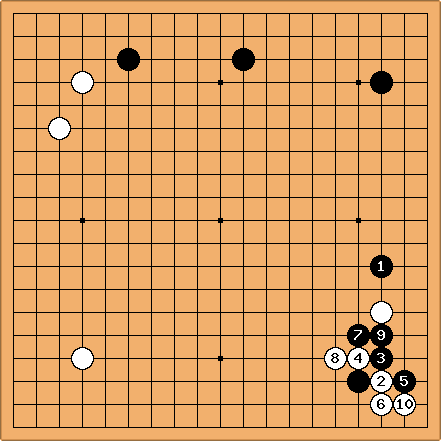 This is a game from the 21st Meijin League (1996) where Cho previewed the variation along the right side 7 years before the Samsung match. 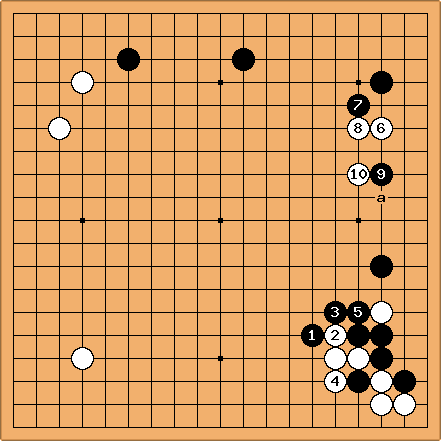 For what it is worth, Pak played the same kosumi in the Samsung game as

here. However, Cho played a 2-space extention down the side at a instead of pushing at

as he did here.