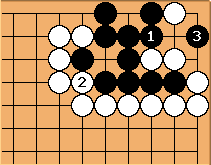 Living is not so difficult. Can black do better?

unkx80: Unfortunately, this does not live. Think under the stones.

wait a minute. why doesn't this live? If white cuts 1 and 3 the snapback works. (black retains miai) Am I being dim?

unkx80: Sure the snapback works, but think further than the snapback itself. As the name "under the stones" imply, please consider what happens after the capture of the stones (in the sense the stones are physically removed from the board).

(Later) I actually forgot that I had this problem set as Snapback Problem 16. That should explain why. 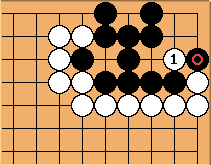 has captured the White stones in a snapback, 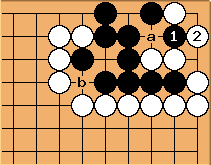 a and b miai for killing. 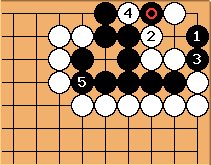 Will this work, find it hard to read out the snapback

MikeTerry: I can't see anything better than this for Black. White can try the same under the stones trick as in the first diagram, but then... 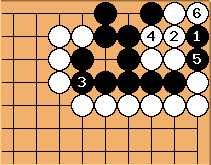 , and the extra white stone totally changes things. After Black throws in with

and the resulting snapback we get to the following position: 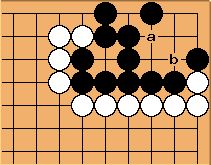 Note the extra space at a. Now when White plays back under the stones at b... 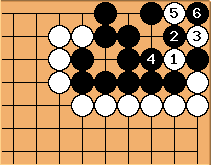 Black lives with a double Ko. So White is unable to avoid fighting a Ko at some point in the sequence to kill. 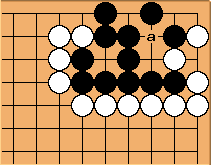 in the previous diagram Black is already alive, as a is protected. 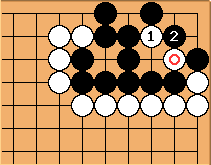 In fact, Black is even alive in this position, after

tries to take away Black's eye,