Here are some examples of nerai and its verb form, nerau.

I (Bill) expect that some SL readers may be puzzled. On the nerai page there is a lot of discussion about the meaning and translation of an unfamiliar go term. I thought that some examples might help people get an idea of what is being talked about. :-)

As John Fairbairn points out, nerai/nerau is a fairly common Japanese go term. It occurs four times, for instance, in Go Seigen's commentary on his first game in Now I Would Play This Way: Go Seigen looks back at 18 games (Go Seigen: Omoide no 18 Kyoku: Ima Nara Ko Utsu). I thought that various examples from that book in different contexts would be of help. :-)

(Note to other deshis: Since the purpose of this page is to illustrate discussion, please move any discussion, except possibly for a few brief comments, to the nerai page, or start a new one. Thanks. Additional examples are welcome, OC. :-)) 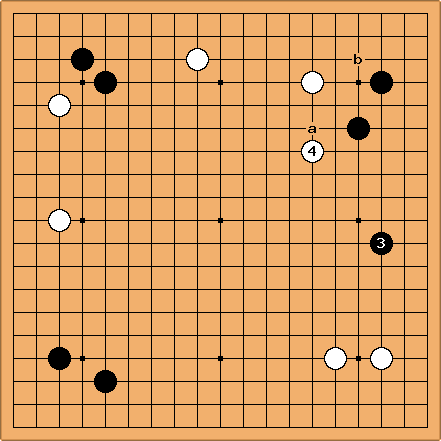 My translation follows. How I rendered nerau is in italics.

is the one space jump at a, Black will probably protect at b and aim at an intrusion into White's top side position." 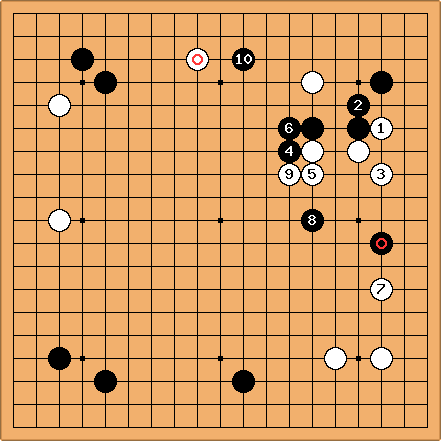 My translation: "If White sinks roots on the right side with

stone, the progression up to

comes to mind, but then White will probably be too busy." 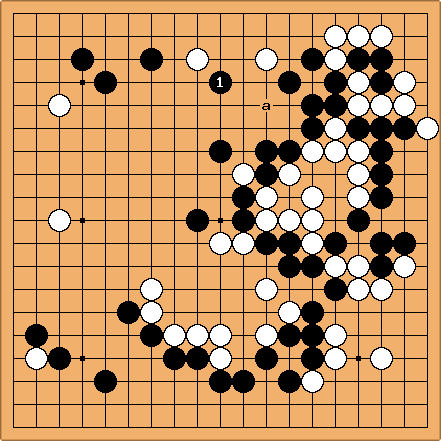 "So at this time

is quite obvious. It is clear that it covers White's number one target, the peep at a." 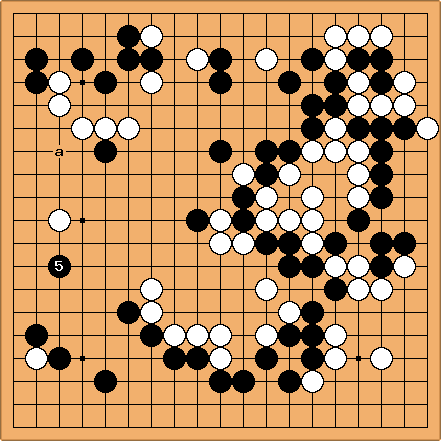 "Black advances up to

, and targets the customary Black oki at a."

"Rei no kuro A to oku te wo neratte imasu."

Bill: Many thanks to John Fairbairn for a few pointers. :-) Any inaccuracies are mine.

BobMcGuigan: Here's an example of the use of nerai from a Japanese book on countering large moyos. It comes up in the context of discussion of White's invasion at

in the following diagram: 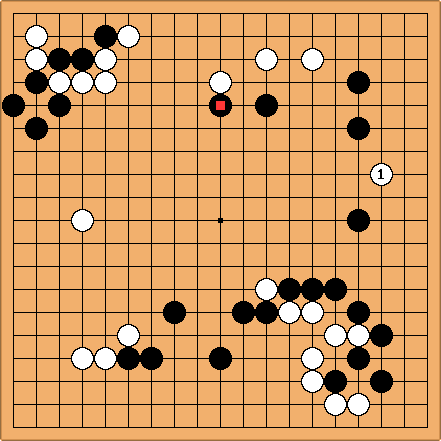 and White responds with the invasion at

in the next diagram and pushes White toward his thickness, White attaches with

and plays the double hane of 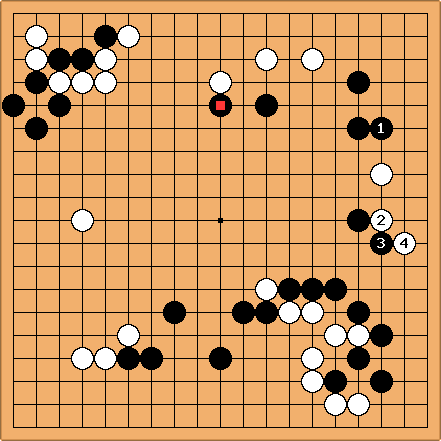 in the next diagram are recommended as "strongest", denying White a straightforward life, but

is described as nerai no kikashi. 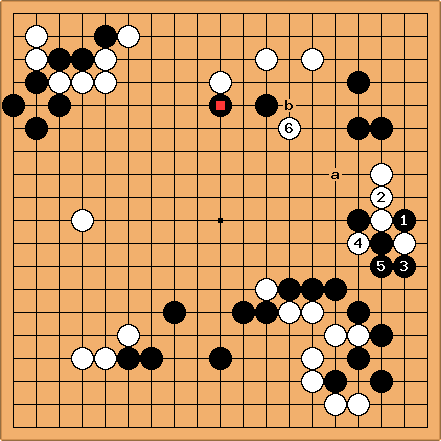 , a ladder break, and if Black plays around the point labelled a he will probably capture the right side but White b, destroying Black's center moyo, at one stroke makes the game favorable for White.

RobertJasiek: From the examples, I see some contexts where nerai is used but I learn nothing what nerai actually is. Can there please be examples explaining the latter? If nerai is translated with words like 'threat', then I also want to see examples for threats that are versus are not nerai and why.

CD: Not sure how I ended up here but Michael Redmond has an entire book based on his NHK lectures on the nerai of tesuji: レドモンドの狙え!戦いの手筋. There, nerai is spelled 狙え, as opposed to the main page which I believe uses hiragana for the second sound (happens in other words too).