In recent times it has been quite common to prevent the Mini-chinese in professional play, and as such, creating a new Fuseki with as much depth as the Chinese openings. (I do however not have the level to explain anything in detail, and since it is quite new there are still very limited material on this fuseki).

The fuseki was invented in Korea[1] and has become more and more popular in recent years. The name of the fuseki was given because the man who invented this choose to dedicate the name to a chinese girl he had fallen in love with. (if you believe such stories that is). No matter the reason for the name, in Chinese, Lei means a flowerbud[2], bearing a message of beauty from this fuseki. 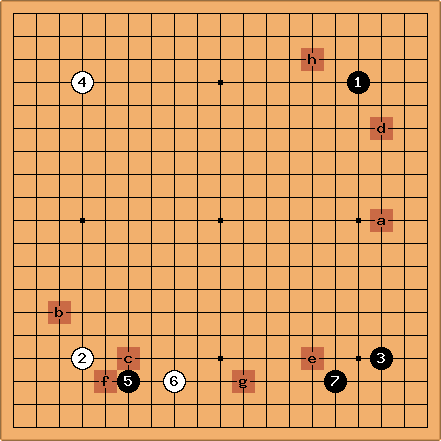 What characterizes the Lei Fuseki are the moves in the bottom of the board. White plays

because he refuses to fall in under the strong mini-chinese. This new pattern developed shows a strong fighting spirit by both players and is a increasingly popular fuseki all over the world, but still especially in Korea. After

, there are many different paths for White to take, but I will explain some of the most normal ones here and leave the more unorthodox moves for a better player to explain.

The letters from a-h are all logic standard follow-up moves and each of them have quite unique characteristics and a special style. As such, it should be obvious even for the low kyu players to realize that this is an opening with quite a lot of depth in it. A very brief example of each of the follow-up moves here will show some of the great variety in this fuseki. 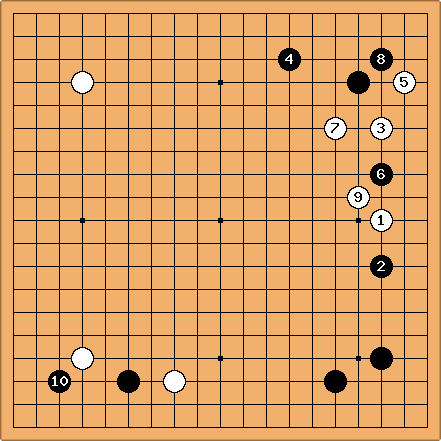 is the standard continuation in the Lei Fuseki.

takes up a vital point on the board and ensures that Black can not develop on a large moyo strategy. However, at the same time, White leaves Black with the later possibility to continue the joseki in the lower left corner, as can be seen with

Dieter: Can someone owning GoGod confirm that this is "standard"? I only found one such game, one from Lee Changho in 2006.

is the answer to

in only 12 out of 67 games on gobase. Mostly Black plays another kakari or

immediately, before deciding how to treat the right side. Of 9 games where

is only once the answer. Mostly ... 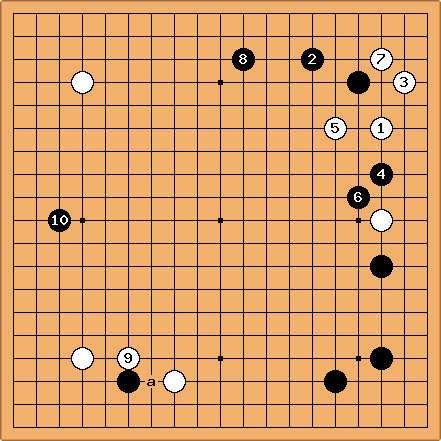 ... this is what happens, at least in my gobase search.

, then White a, is almost a one way street. And it's not over yet. 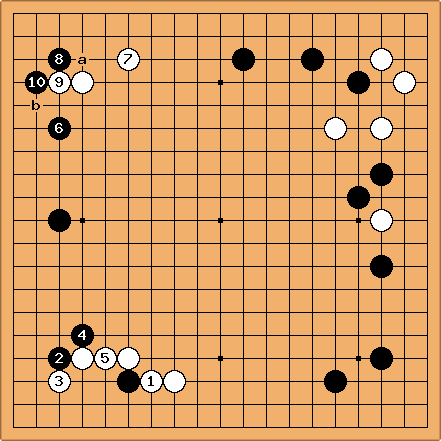 An astonishing 6 games move on to

here, after which it splits into White a and b. 5 of those six were played by Cho HunHyeon, in 2002, who took black in all 5 of them and won all of them too. Five games that are equal up to

- that must have been his favourite way of playing. 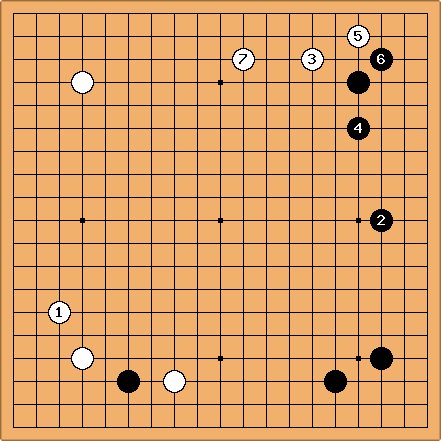 Another standard pattern in the Lei Fuseki. Whites first move shows a strong desire to fight and gain an advantage in the lower left corner. Blacks second move is a natural response, creating an ideal position for Black on the right side. All in all, this is a more standard continuation from the (somewhat) unusual

It is also worth noticing Blacks right position which is quite ideal for him, yet because of White's strong position, makes this pattern equal as well. Both players can still aim on a moyo strategy to win the game.

Dieter: Yes, this I can confirm from a gobase search. There are four games stalling here. However, ... 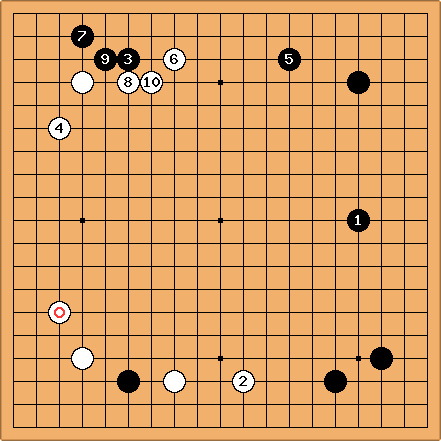 here, going for a high position, is also often seen.

negates the moyo but then

continue to build on the upper side. 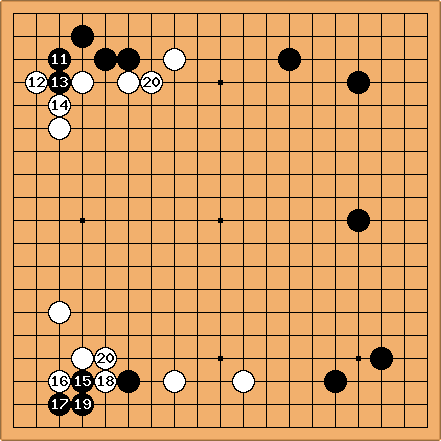 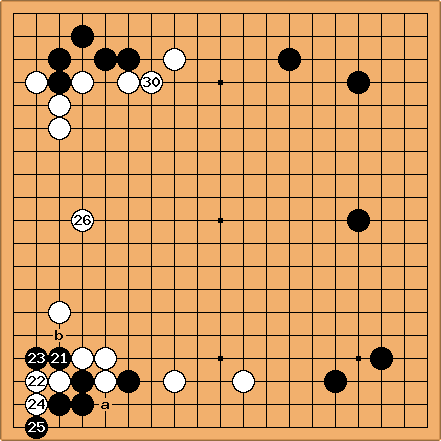 At least 3 pro games, 2 of which involve Lee Changho go as deep as 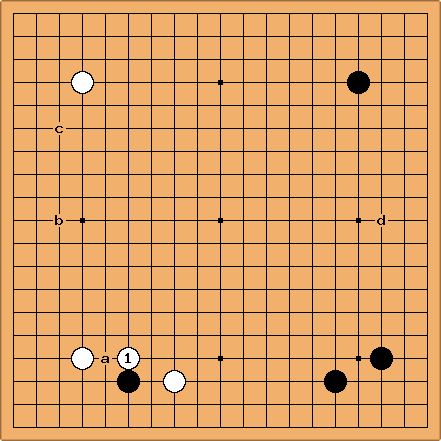 With this move, White strives to achieve an advantage in the beginning of the game. Black can choose to play 'a' which in this position shows great fighting potential, or instead 'b', trying to gain a later advantage by creating a fight in the lower left corner. Black 'c' is also a possibility, but it requires a player with decent fighting skills to play there. The last standard move for Black to play would be at 'd' which simply gives Black the option of a moyo, giving him a somewhat ideal fuseki development while White in return gains the lower left corner. 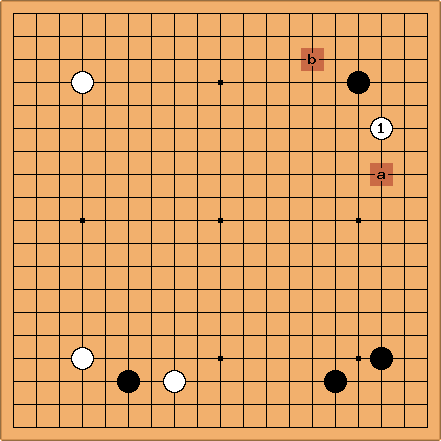 Black can go for a (influence) or b (solid). 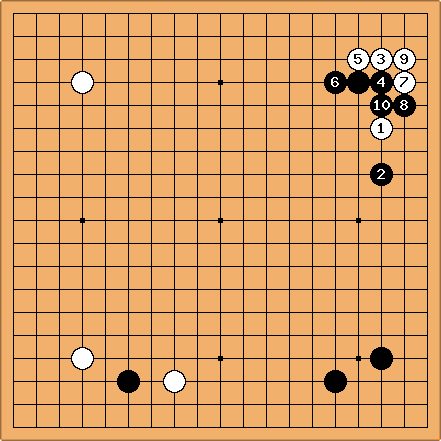 When White approaches with

, it is possible for Black to play an influence focused opening (as you can see). 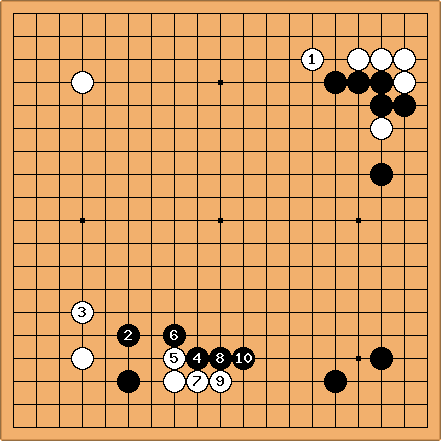 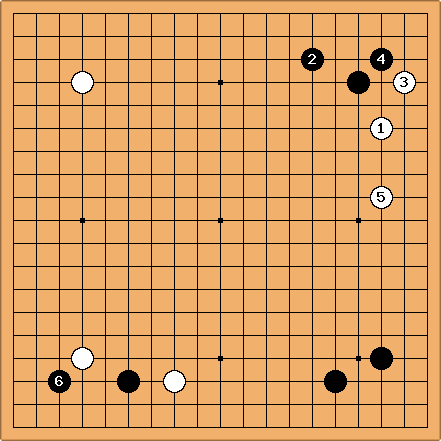 As shown in this last diagram of this section, it is also possible for Black to play solidly like this when White approaches with

. Black normally only plays this way if he do not want to sacrifice the lower left corner for a moyo. This position is equal. 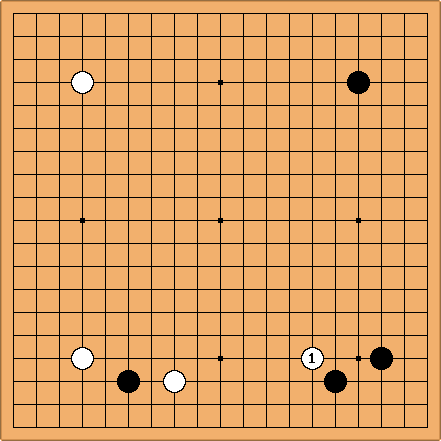 , it is merely to limit Blacks influence. Normally Black would have to answer this sudden attack on him, yet in this opening he can choose between answering at this move or play at 3-3 in the lower left corner, whichever suits him the best. If Black does not answer, it is most likely that the lower right corner will develop into the Large Avalanche joseki. 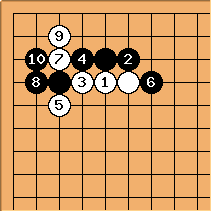 Do not go into the large avalanche unless you know how to play this joseki, especially because it is so advanced, it is easy for an unexperienced player to get a disadvantage in this joseki. Therefore it is often advised that Black responds when White approaches his position, both to avoid this joseki, but also because Blacks influence is quite limited if he chooses to play elsewhere. 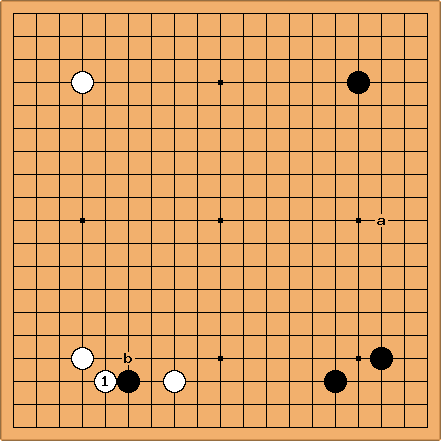 There are simply way too many variations to explain them here. Black can choose to play at a, or approach the upper left corner. He can also choose to respond to 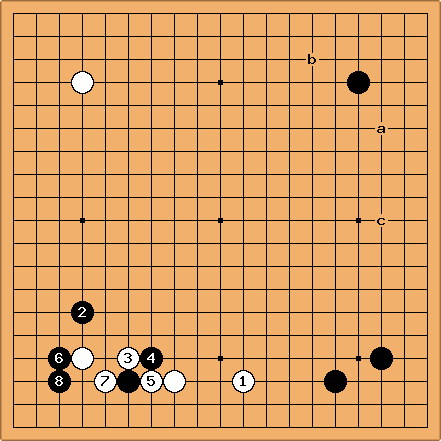 When White chooses to play

, making a double approach at Whites 4-4 stone, and as shown in this example, it is normally treated as a standard double approach joseki, with the exception that White already has an extension along the bottom. After this sequence, White can choose to approach Blacks upper right corner with a or b, or eliminate the ideal Black extension by playing at c. 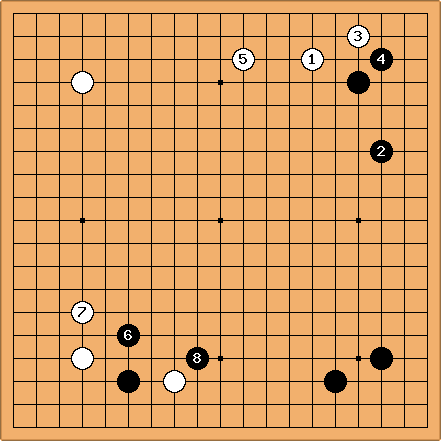 The last move we will show here is

. This move is quite a standard move and Black has an almost unlimited range of responses to this move. What is shown in this diagram is merely one example of how it may turn out.

[1] John F. Agreed it was popular in Korea, but the first game we have in GoGoD is Kobayashi Satoru vs. O Rissei in 1996, so that casts doubt on it being a Korean invention. Also, it seems likely that anyone who played

before that must have had a reply ready in case White pincered at 6, so presumably the fuseki was also tested in private before 1996.

Lasse? The first one is from 1995 between Duan Rong and Luo Jianwen, both from China. At least that is what it shows in the SmartGo Program. I also wonder where the Lei story is from, all I know is that it is a Korean story, most likely just a story though... but its quite interesting to hear about :). Can any of the High Dan players explain more about the theory of the fuseki?