This is a discussion of the famous game between Lee Sedol and Hong Chang Sik, where Lee played out a broken ladder to force a capture at the other side of the board. The complete game can be found at 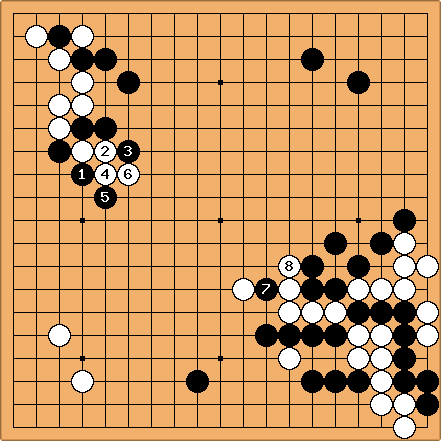 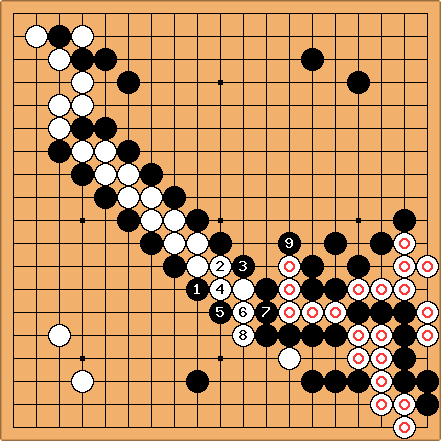 Alex Weldon: Madness. I mean, that's a lot of captures, but wow...

DJ: Well, Black played a flamboyant manoeuver, chasing White in a ladder that was not expected to work, just to be able to play

in sente in order to capture all the marked White stones in the BR corner! And at the cost of seeing many, many of his stones played in the non-working ladder captured in a series of double atari.

JangJirak? Despite the broken ladder, this exchange is a huge loss for W. However W was forced to play this way, which I'll explain below.

Scryer: However, as it turned out Lee continued to present Hong with more urgent situations to solve, until finally Hong resigned without ever getting around to taking ANY of Lee's hanging ladder stones. 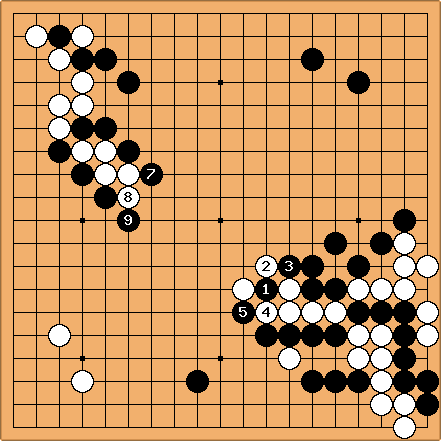 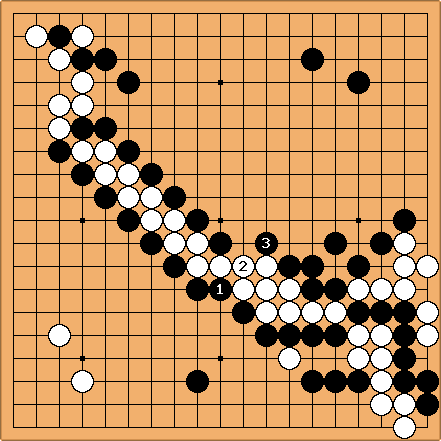 was the surprise move that forced W to play out the exchange. No matter what W does now, W can't avoid a huge loss. W admitted he didn't notice this move and was shocked to see it; otherwise he would have avoided it before.

Note the timing of

in the previous diagram. Lee played out a few moves of the broken ladder before this foreplanned ambush move, giving W no chance to escape his plan.

Lee had read this all out already when he played his first move around the UL corner before this sequence (that is E17), and considering this was a blitz game, it's amazing isn't it?

iopq: Well, even though that's a really funky strategy, I don't think this being a blitz game impresses me. People just underestimate the strength of professionals :) That's a given in any game. In chess I saw an endgame position that involved reading to find moves that cause a zugzwang... which I couldn't solve because I couldn't read to find the zugzwang. A professional chess player read it correctly in a blitz game. Of course everyone was impressed... but I just keep finding out professionals just see those positions so much more often that it's not that impressive

Alexandros?: That very fact is what makes it impressive. The fact that they have worked and studied enough to see those at a glance. Saying that's not impressive is like saying that an Olympic long jumper isn't impressive because, hey, he jumps all the time.

Neuron: I have a question regarding Lee's initial ladder moves before the key move. If I understand correctly, those first ladder moves were played to give W no other choice but to fall in the trap, otherwise white would've just abandoned the top left. However, I wonder why Lee stopped where he did and not further down the ladder. Assuming he was confident in his strategy, quitting the ladder early meant white would've been less punished had he decided to give up the ladder and fix the bottom right. (Hope I'm making sense)

golearner I have a question about the final position of this game. I believe the lower left corner belongs to Black, but I see some dispute (at for example, the web site listed above). Which side wins that race? (Thanks!)

Uberdude It is a seki, which given black's large profit elsewhere is a great result for him.

tijnhet? The dispute seems to be valid. A 9p chinese pro commented on the game that white is dead in the corner, leaving black at about +120 points. Also Al Younggil 8p commented that white is dead. Trying to find the seki with several 4dan players for 45 minutes resulted in nothing but white being dead in the corner unless black made a mistake. So it is, contrary to what Uberdude has said, not a seki.

sigmundur? Can you show how black kills? To me it seems they both have one eye, and discounting the kos black's outer liberties are taken before white's inner ones. Maybe some black must use the kos? 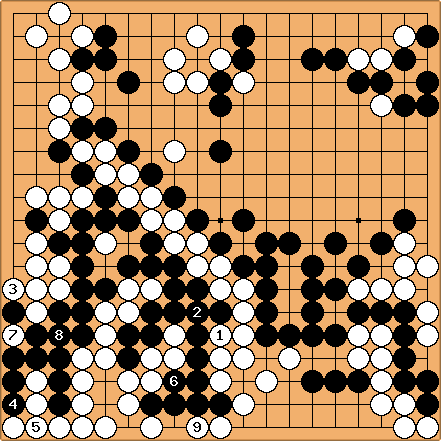 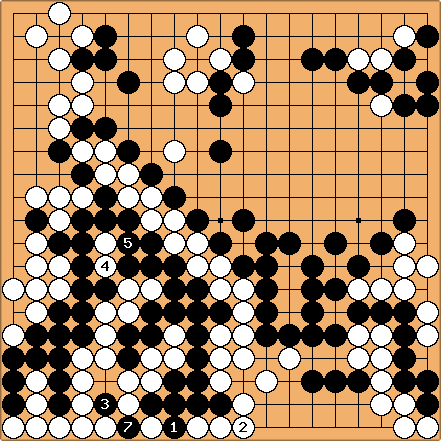 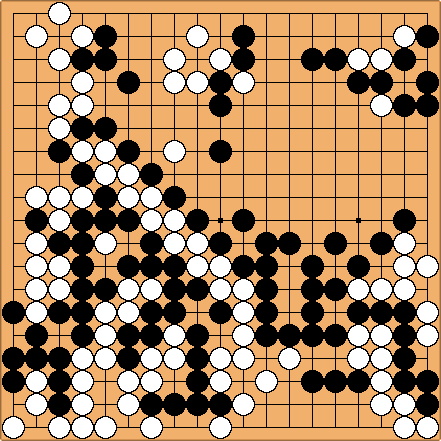