this seems very similar to the previous game. But some stones stand differently, so one can do a study. 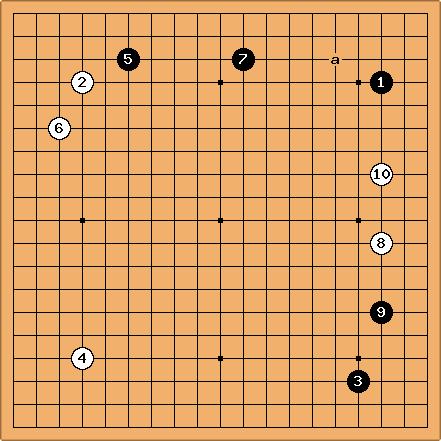 is an active choice. Black has a plan.

Dieter: Do you derive this from earlier games ? Why is komoku more active than hoshi ?

HolIgor: Of course, this is the first move only. But in my opinion komoku is a deviation from symmetry. Therefore it is active and not waiting.

is opposite komoku. An active pressure from the beginning.

HolIgor: Yes, it is hoshi. It threatens to press komoku down with a high approach, doesn't it. Moreover, if I don't say something controvertial from the start, nobody is going to discuss the game with me.

Dave: Through the 70's White most often aswered this 1-3 with a play against the upper right corner, leaving Black the option to play first in the lower left. Since the 80's, however, White has more often than not played next in the lower left. At this point, I think the correct interpretation of this

is that it invites White to play next in the lower left. White plays it expecting Black to play next against the upper left.

Dave: White chooses a parallel fuseki. The second play on hoshi by White also means that there are no unbalanced corners on the left (compare to Kiseong 12 Game 1 where this was not true). Therefore the early urgent spots in this game should tend to appear on the right.

HolIgor: Interesting that in the next and decisive game Yi Ch'ang-ho chose a.

Dave: Now the standard choice here in professional play. The older move at b in the upper right is a very distant second. This is not to say that

is good and b is bad. It appears much more a matter of style. The more conservative play at b has a better overall record in this pattern. In contrast, when Black plays on the 4-4 point in the lower right with

instead of 3-4, choosing the mini-chinese thereafter has produced better results than making shimari in the upper right. YMMV :-)

is a wedge similar to the previous game yet, the stone in the lower right corner is komoku. One has to look if that idea is well studied. 67 hits at gobase, which means that most pros play

chooses an attack from the bottom. This actually means making the top corner solid. 40 hits. Most people prefer a shimari with some pressure on the white stone here. I'll have to look at other ideas but it is possible that in some other games this was just postponed. 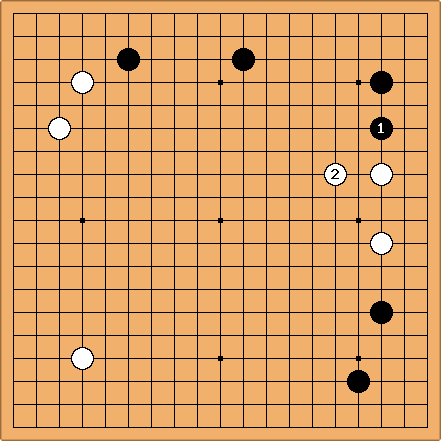 is the same idea of inviting an invasion. Make yourself solid in the corner and wait. 35/38 hits.

is a solid move. White almost settles on the side. White is playing the same tactics of the small fighting units. The drawback is that the territory is small. 29/35 hits. Ineresting that white won more games.

Just to let you know I am reading this with the highest interest, but don't feel equipped (yet) to participate in the discussion. keep it going. Dieter

HolIgor: I believe that you are a bit stronger than me. I would gladly give the driver's seat to somebody much stronger, a pro, maybe. There are a lot of games commented by pros. There is slight difference yet to what I want to have here, though. I'd like a lot of questions and variations from players of all levels. I am not qualified, so I try to look in other games for ideas. I think that I have extracted some ideas that could be useful. So, everybody is welcome to make comments. If you suggest something wrong then you can be corrected by stronger players and shown what is your blind point.