HolIgor: What happens here is not so unexpected and strange after the analysis of previous game. 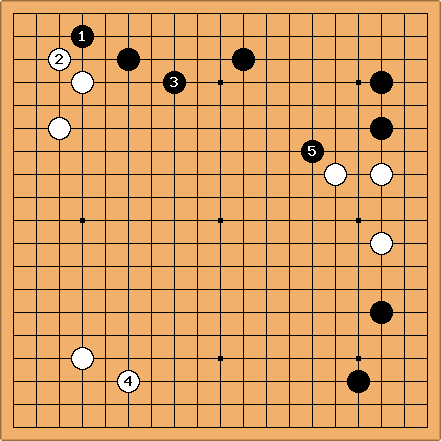 tries to establish settle the top immediately instead of waiting for white's invasion.

is 8 of 19 which is about a half. What are other ideas for white?

is registered in two more games. Both won by black.

is the idea we've seen in the analysis of the previous game, yet we did not follow it. It is interesting to see where does this lead.

Yi Ch'ang-ho faced the position after

about a year ago. His opponent was Yi Se-tol then. Black won that game and one could imagine that Yi-Ch'angho prepared something different. Ch'oi probably knew that game too. I remember watching that violent game.

In the second game of the current Kuksu match this position happened again and again black won the game by resignation.