Which endgame moves remain and which order should they be played in? 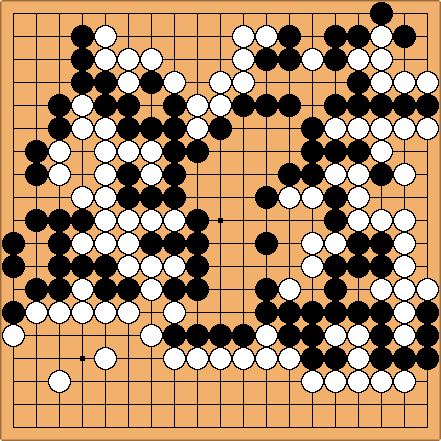 To kick off some comments, I have posted 'my answer' (TM). I think I got it roughly right, but would like any comments/corrections. 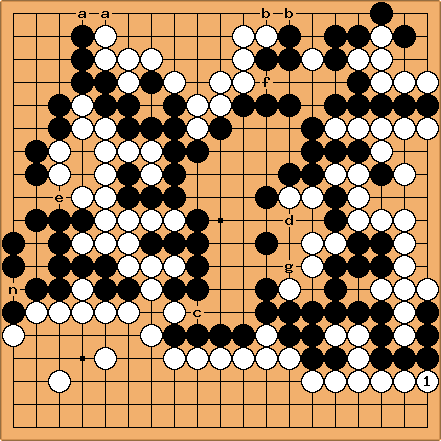 After White played 1 in the lower right, the player asked:
My question is about evaluating the order of endgame moves. It seems White played a gote endgame move too early. Wouldn't d19 (a) for instance be better since it is sente? Also how does the value of a simple ko compare to other moves (like White A7 (n) or Black sealing off the same thing)? I would think it must be less since it can be taken back later.

With my infinite wisdom, here's what I wrote:

A ko without any more value is normally seen as half a point in gote - the smallest possible move - and you are right that these should be kept until the end.

The played white move is reverse sente - it stops a black sente move. If my endgame theory is up to scratch, the black move would be worth four and a half points in sente, so the white move is worth the same (although it is gote).

(When I say 'probably' it is because it depends on what else is around. E.g. g would not be sente for Black if White could still play a.)

I had some comments about the value of cutting at q, but for this endgame discussion, let's assume that the cut doesn't exist. (I've put that on Ko fight example 3 instead.)

So far so good? 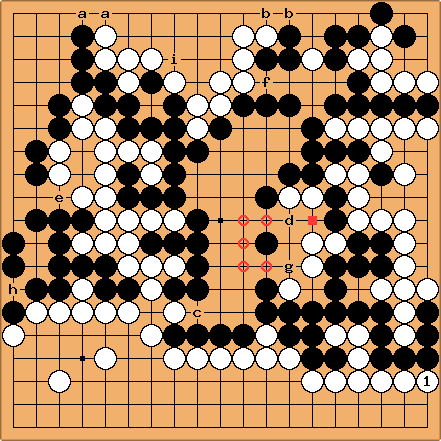 1) The ko at h is fairly large. Of course White has a ko-threat each time she extends, but that also increases the value of the ko.

2) The ko at i is also an important one. The best way for Black to play in the upper left, I think, is simply descending (no hane) to keep the aji of the ko.

3) In the center right, the maximum Black can expect is to make all the circled points. White can expect to make the squared point. Both players approximately need three moves more than the opponent to obtain a maximum result, so I would say a play in the area is worth roughly two points in gote.

4) At e is worth two points in gote because it makes one point and there is a one-point follow-up in sente.

5) As with d and g, the moves f and b can best be evaluated together.

6) All in all, it might be possible for this particular setting to dispense with deiri counting and simply try to figure out the optimal order of play. If you can do that, you're a dan.