KarlKnechtel: Beware of strange throw-aways that are actually sente!

Anonymous: I wouldn't go so far as to call this hamete - I would call it a ko threat. Maybe KarlKnechtel's line above is a more appropriate title for this page?

Wow, I had completely forgotten about this page :) I wrote this when I was about 6 stones (maybe more) weaker than I am now. There is probably some refactoring to be done here - maybe these diagrams, or minor variations, would be useful for examples on other pages about tactics?

Hicham: I agree , this just looks like a ko threat to me. Nothing hamete like in this play. This page should be rewritten(or deleted, but the material is useful) or made into a subpage of Karl's page.

Bill: I agree that making this page a subpage of Karl's home page would be good. But I must say, I love the title! :-)

Andrew Grant: I don't. A hamete is a trick move in a joseki. This is not a joseki.

Bill: It's not joseki, it's not hamete, it's not incognito. But what style! 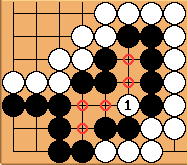 This diagram is modified slightly from one which came up in an actual game (played by a friend), where I spotted the hamete. I've adjusted it so that the result of the play is even more severe. :) Notice the space that White is playing in (circled) is surrounded by four strings; there must be a way to exploit those cutting points. White, having thought this out a dozen or so moves ago, quickly plays

. Bizarre-looking, no? Seems like a -1 point play in gote. But look what happens if Black assumes so, and tenukis: 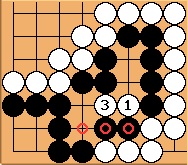 Now Black must be really careful, and has already lost some points. The move at the circled point seems obvious, since it saves the

stones - the whole reason that the first play didn't seem to be sente. But... 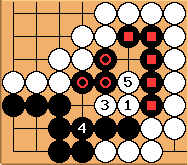 bgroups are caught in connect-and-die, and worse yet, Black has no eye space except the 2x2 square in the corner. White is in no hurry to capture either, so Black cannot make two diagonal plays in there to form two eyes. Black loses everything! 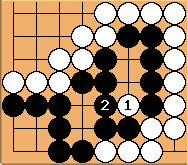 So if Black was careless enough not to respond to

(this stops White cold; there are other ways too), Black needs to defend some other way. 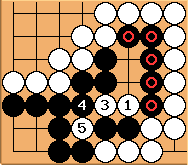 group immediately because of shortage of liberties, so she captures instead. Black has to be careful again - he must not retake! 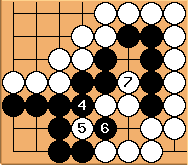 If he does, he won't be able to get a second eye. 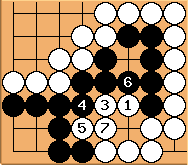 This way, Black connects and gets two eyes, though he still loses points because of missing the first play. 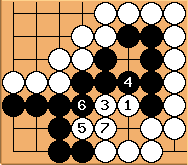 White cannot cut because of shortage of liberties. She must be content to capture, and Black connects - same result as before. Either way, Black has lost five points of territory, while White has made one and taken two prisoners - so

is an eight-point threat.