This is a story about a somewhat unusual ko in a recent game of mine. I'm sure more experienced players see this sort of ko all the time, but the play was interesting.

Recently I played out a ko against an opponent apparently about my strength, where if he won the ko it would be appropriate to connect, adding liberties to one of his groups through the connection and trapping my group in a sort of net. (I was playing this on NNGS; I use the male gender from here on as a guess based on the opponent's username.) Meanwhile, I couldn't afford to connect after winning the ko because he could save that group and I'd still be trapped in, or at least that's what the situation looked like to me. Fortunately I could capture after winning which solved all the problems. The group I was going to capture was connected through the ko, and would be saved by winning the ko, eventually winning the capturing race against my group. At least, that was my calculation.

The ko was huge, because my group was preventing one of the opponent's groups on the side from escaping to make two eyes. There were few threats on the board for me, and worse, the first one he played was internal - if I ignored it he would save the group on the side and it would still be a loss for me. (Though, I think it may have been best play to ignore it anyway. I was getting at least 12 points and restoring the influence of my surrounded group by winning the ko.)

I threatened first, and he took it - it was only a two-stone capture immediately, but taking it would give me a foothold on his largish framework on the other side of the board. So he responded - in a way that gave me a second threat there. I retook, then he played the internal ko threat. It was only then that I realized how big that threat was, and responded and let him take back after some thought. I went and played the follow-up threat on his framework.

Then he did something which really surprised me. He apparently judged the threat too small this time - because he instead took away a liberty of my captured group! I couldn't believe my luck. Gleefully I recaptured, ignored his next threat and captured his group. What a relief! He continued by following up on his ko threat (which I'm still dealing with - the game is adjourned at the moment), with a tenuki at one point to take care of my own threat. So I lost on two fronts there, but made a huge gain on the ko - and hopefully I will be able to find another way to compromise the framework.

Stefan: I have trouble visualising the sitation, but it sounds interesting. Could you add diagrams? 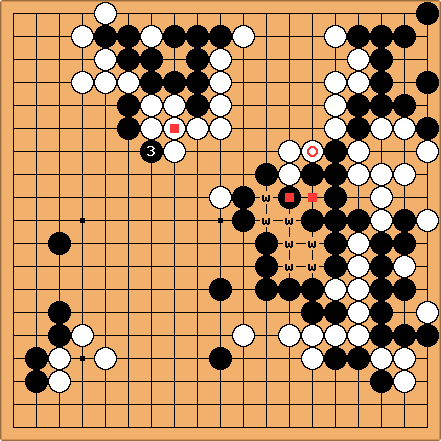 I'll do more diagrams later. The w points mark the location of the group I captured; the squared point and

are the points of the original ko. The

stone is the play I thought gave me my golden opportunity.

is his second ko threat. His first was in the top-right corner where I captured four stones. My first was at

. I think that's all accurate, anyway.

I can't see the