On the page for osae it is noted that people often confuse these two Japanese go terms. I have a small Japanese dictionary of go terms, published by the Nihon Ki-in as part of Bessatsu Igo Kurabu No. 37, 1981, produced by the Ki-in editorial staff. Consulting it we find:

An illustrative diagram is given for osae: 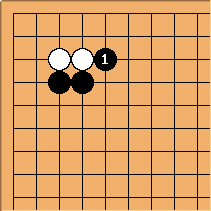 It seems to me that these definitions aren't very definitive. From the diagram example I conclude that some moves are both hane and osae at the same time (I'd call

a hane). Moreover it looks like just about every hane is an osae. According to the definitions the following would be an example of an osae that isn't a hane: 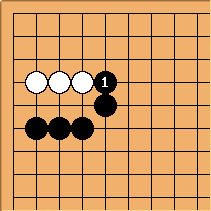 JF: Bob, a couple of comments. Yes, the definitions are confusing as given but more to a westerner than a Japanese. The base meaning of the words are available to a native speaker. Hearing hane he would therefore instinctively look for a hane shape. Hane could be wing/feather, but the most likely image association here would be with the tittle at the bottom of many downward strokes in calligraphy.

Nevertheless, there is still potential confusion. The book you quote just lifts whole sentences unchanged from Hayashi's encyclopaedia, but usually - as here - omits the extra data he gives. In the case of hane he is more explicit (katachi wa hane de,..) but also he concedes that there are times when the blocking function of a hane can be emphasised and in this case it is possible to use haneosae - or osae for short!

My own feeling is that we should never use osae but should use hane and block: hane when we are thinking neutrally or about the shape, but block when we are emphasising the function, and of course in all the other cases of blocks that are not hanes.

There is at least one other word that spices up the mix: magari (in the sense of magaritsuke, not its guzumi sense) like hane is mostly a shape description, but it can also have a blocking meaning. In that case we should say block.

Bob: I agree that we should use terminology that is clear and use English when there is a good English word for what we want to say. Hence hane, yes, and block rather than osae. When there is a particular shape involved, as in the case of hane, I would like to use a word or words that relate to the shape. So rather than simply use "block" when magari is played I think it might be good to say something like "Black turns and blocks...", but that might lead to phrases that are too cumbersome. It seems we're getting into the old form versus function debate.

Bill: As for above vs. below, I would not say that that is key, even if it is so about the frequency of usage. Which word to use for a play that makes the hane shape depends upon the purpose of the speaker or writer. For instance, we do not say, "Block at the head of two stones," because that's too general. As you point out, every hane blocks the stone or stones it hanes.

I would call both of these hane, and I might call Wa osae, but the purpose of

is mainly to cut, not to block, so I would not think of calling it osae.

is an example of hanedashi, a special kind of hane.

(Peter Freedman): A hane is always a diagonal move. An osae is always a blocking response. When a hane blocks, it is still a hane. I don't know if the Japanese would use the term hane-osae...