Bob Myers: Nice graphic. But apparently both RiffRaff and Bill feel that CuttingStones are different from KeyStones. How? Please provide an example. At least in Japanese, "kaname-ishi" does not have the merely generic meaning of ReallyImportantStonesThatYouDontWantToSacrifice--it means, uhhh, exactly, PivotalStones, or CuttingStones. I understand that the character 要 can mean "important", but in its "kaname" sense its meaning is pivot, or keystone in an arch.

Are we possibly dealing with a difference between Chinese 要子 and Japanese 要石? In that case, fine, make a new page for ImportantStones with that Chinese, but leave the Japanese to mean what it does, which is CuttingStones.

If the issue is that the main page should be KeyStones and CuttingStones should be an alias to that page, that's a perfectly good, even preferable solution.

Bill: Well, I don't think that all cutting stones are key stones. Some are obviously sacrifice stones. Others, I think, are disposable. Also, I am not convinced that the example on the cutting stone page shows a key stone.

Bob Myers: You're getting confused by the superficial meaning of CuttingStones, thinking it refers to, literally, any stones which cut. In fact, that term was developed precisely to refer to KanameIshi/KeyStones and means the same thing.

Perhaps you think CuttingStones is a bad term, precisely since it can be misinterpreted as any old stones which cut, on which point I'd have to agree with you, but the usage is pretty widely established, right?

Maybe we're at one of those points where we say this word means this but maybe that or something else to some people. In this case, KanameIshi/KeyStones would be the main page, with more detail, and CuttingStones would indicate that the term mainly refers to KanameIshi/KeyStones but was (mis)interpreted by some people to mean any old stones which cut, even if, say, they were already caught in a geta.

Speaking of the example on the CuttingStones page, I disagree that it's a bad example of cutting stones. They are precisely CuttingStones. But you're right if you mean that it's not the best example. The concept of CuttingStones/KanameIshi is most relevant within more complex fights where there could actually be some question about what the real PivotalStones are. We should definitely come up with another example

http://users.erols.com/crhutch/go/gop.html cites the proverb, "Capture the cutting stone." And

Go Base in its go jargon dictionary, for kakae states, "black 1 is kakae, firmly capturing the white cutting stone." The next one is an SL page, Hane versus Osae, where Robert Pauli says, " In DGoZ 1/05 someone explained hane to be from below and osae to be from above, in the sense that the cutting stone, if played, approaches the border or the center. Right??" (I think he means cutting the hane or osae.) Then we have a citation of Wilcox's "EZ Go": "The act of preventing two stones from joining is called cutting, and the enemy stones doing that are cutting stones. Capturing cutting stones is valuable because it allows two strings to join into one." Then there is the entry in the Go World index for "cutting stone" which gives the same proverb, "Capture the cutting stone." In fact, none of the uses among the first 10 search results for cutting stone mean key stone. And it includes authoritative sources: Go World, Gobase, and Wilcox.

Bob Myers: Let's take this a step at a time.

First, we have the Japanese word "KanameIshi". I assume this corresponds 100% to the Korean Yo-Soek; it's written with the same characters. The non-go meaning of "kaname-ishi" is "keystone", the stone at the top of an arch which allows it to stand upright. In the go context, "kaname-ishi" was presumably adopted to refer to stones the absence (capture) of which would cause something (the player's position) to come tumbling down--in this case, due to weak enemy groups becoming joined up. Of course, the analogy is not perfect; arches do not have two colors of stones.

As with all Asian terminology, the term KanameIshi exists for a reason. In this case, the reason is to succinctly convey a basic principle of regional fighting, which is that stones whose capture allows the opponent to join up his forces are, well, like keystones in an arch. The Japanese would hardly have gone to all the trouble to make up a word like this if all it meant was ReallyImportantStones, or StoneUsedToCut.

(The English rendering term "pivotal stones" appears to be an artifact of someone who did not understand that "kaname-ishi" meant "keystone", and instead de-constructed the word into "kaname" and "ishi", where "kaname" by itself does mean "pivot". This word has not gained much popularity in English, although I did see it in a recent issue of GW, and probably should not.)

Of course, the "kaname" character can also be read "you", meaning "need", "demand", "require", which may have been what led some to the meaning of "important stones", but here it is clearly part of the "kaname-ishi" compound with the predetermined meaning "keystone".

So where does KeyStones fit in now? Just a guess, but it seems logical to assume someone who knew that KanameIshi meant the keystone of an arch started using this, perhaps initially without a space: "keystone(s)". Perhaps at some point someone put the space back in, giving us "key stones", which when re-interpreted superficially could be thought to mean just "important stones".

The current page states KeyStones are "stones that should not be sacrificed (i.e. important stones)." This is right as far as it goes, but implies that the meaning is AnyOldImportantStones, rather than the more specific meaning of KanameIshi. Yes, the proverb says "kaname-ishi ha suteru-bekarazu", but that proverb is instructing us how to handle KanameIshi, rather than declaring in general that any stones that should not be sacrificed are KanameIshi.

The current page then goes on: "opposite of disposable stones". This, too, is correct as far as it goes, but continues to give the impression that KanameIshi are AnyOldImportantStones. It continues, "typically, key stones are cutting stones, separating the opponent's weak groups." Again, this implies incorrectly that there can be key stones (kaname-ishi) that do *not* separate the opponent's weak groups.

Making KeyStones into a generic concept of ReallyImportantStones has two problems. First, we end up with no English term with the specific KanameIshi meaning. Second, the concept is so general as to be meaningless.

It's not too late to rescue KeyStones from its would-be abductors, though, in my opinion. We should say that it means exactly the same thing as KanameIshi, and that although sometimes used to mean ReallyImportantStones, that usage is incorrect. We might also want to mention that using "keystones" is also possible, less subject to misinterpretation, and truer to the original etymology.

Now on to CuttingStones. My sense is also that this term (note the plural form) was invented precisely to convey the meaning of KanameIshi/KeyStones. After all, if CuttingStones was a key concept separate from KeyStones, then it would presumably have an equivalent in the Asian languages. But it doesn't. Compared to the other terms, CuttingStones has the advantage that it actually says what the stones are doing--cutting (although "separating" might be better). But like KeyStones, CuttingStones has been subjected to revisionist reinterpretation by weak players not acquainted with its history or possibly even the concept of KanameIshi, based on its superficial form "cutting stones", to mean AnyOldStonesThatCut--certainly a useful English phrase to describe stones which cut, but not one we would consider a "go term" any more than we would "pincering stone".

In any case, the term CuttingStones has the disadvantage of giving rise to the very confusion that we are seeing in this discussion--between "real", capitalized, KanameIshi type CuttingStones and plain old cutting stones, stones that cut.

Because KanameIshi always cut (separate), but stones which cut (separate) are not always KanameIshi. To be KanameIshi, the separating has to be in the context of a battle of some sort, where the cutting stones are actually important. For instance, if the groups of both sides of the cut are already unconditionally alive, there would be no reason to give a special name to the stones cutting them apart, or otherwise worry about them at all; the stones would be cutting stones (stones that cut), but not CuttingStones. And typically a cut in the middle of a tight typical battle that ends up being captured or traded or counter-cut or what have you is not "pivotal". In fact, it would be rare for a single stone to be pivotal at all--it would typically not be pivotal until it ran away and became central to the strategic tussle. That's why CuttingStones is nearly always found in the plural.

However, that would not address the inherent confusion in the term CuttingStones, which is almost certain to rear its head again, and prevent people who see it from getting to the underlying KanameIshi concept. So maybe it would be better to have a separate CuttingStones page to highlight this problem.

As for Bill's examples (thanks), to me it seems that all the examples support CuttingStones as having the KanameIshi/KeyStones meaning.

I am having trouble finding a clear example for key stones -- i. e., one that not only looks right to me, but which is called such in professional commentary. But I think we should find one or two of them and either add them to the parent page or link them to it. Then a rewrite of the cutting stones page to reflect the different meanings will be easy. 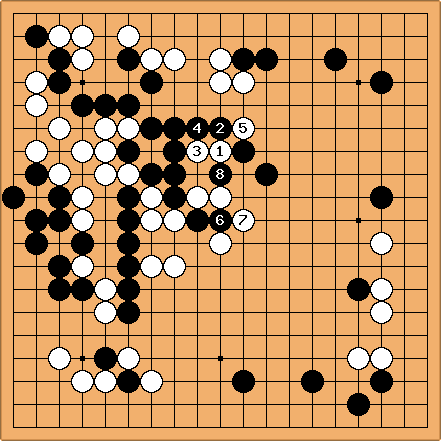 , the commentary says "Players proud of their fighting strength would probably attack with 1 and 3 in the diagram without even thinking. But if White cuts at

, Black counters by pushing out at

Bill: Great, Bob! Pivotal stones seems to be the key phrase now. It yielded a good example from The Magic of Go (cached). (BTW, the pivotal stones are cut off by the opponent, they are not cutting stones themselves. ;-)) I think we can go ahead with Pivotal stones as the main page.

BTW, does GW stand for Go World or Go Weekly?

(Later): How about let's just make the parent page an alias for pivotal stones?