This is a really tough tsumego problem with a main line of 17 moves. 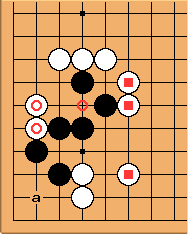 On the other hand, Black can threaten to capture the

stones, to break through the

stones or to make two eyes in the corner. With these weapons, Black has to find the proper order of moves to live. 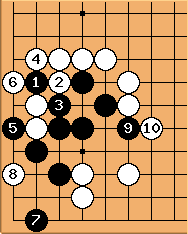 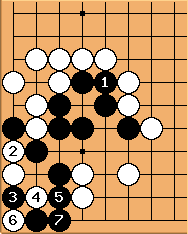 , White suffers from shortage of liberties. That is, Black can play as in the following diagram: 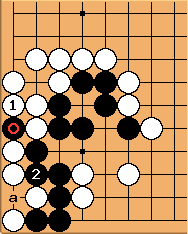 and White can't connect at a or she loses five stones.

Now for some variations, backtracking from Black 17 to 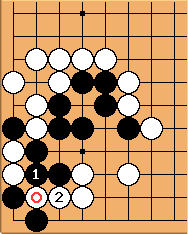 (White 14) it is tempting to capture at

, but White connects at

and leaves Black with two false eyes in the corner. 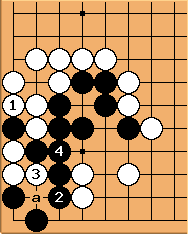 in this diagram, then Black plays

, White can't play at a, again because of shortage of liberties. 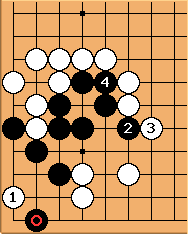 ), the natural white response seems to be

here. In any case, it is the vital point.

is trapped already, and Black has time to make his second eye with

Of course, if White prevents that second eye, Black makes two eyes in the corner, playing 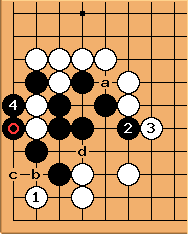 What if White at

As a sidenote, the timing of the forcing move at

seems arbitrary to me, so if you have thoughts on that one, please explain.

The whole meaning of

in the main line is to get

in place in sente. This stone serves amongst other things to prevent a connection underneath, as demonstrated in the "variation at 8". 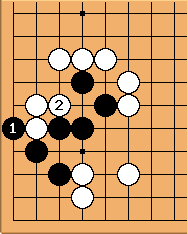 , in the process destroying the eye potential there. Now Black has to make two eyes in the corner: which he can't do. 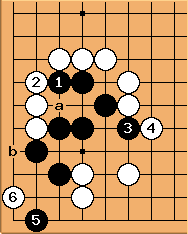 is vulgar. It destroys the possibilities and White defends at

with good aji. The move at

is still forcing, but now Black has run out of resources. White strikes at the vital point at

and makes miai of a and b. 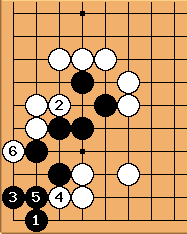 Now how about seeking life in the corner immediately?

destroys the eye above and even after

, Black doesn't have two eyes in the corner. 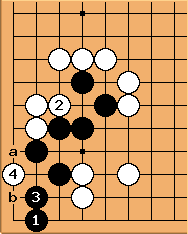 Now a and b are miai. 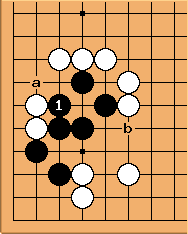 seems to work too: if a, then b makes an eye in sente. If tenuki from the corner then also life ? (To be continued.)

xela: I'm not convinced. Rather than clutter this page, let's call it Gokyo Shumyo, Section 1, Problem 52b

This solution does not take into account two possible moves by White that squeeze Black's liberties. 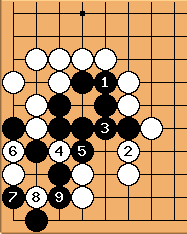 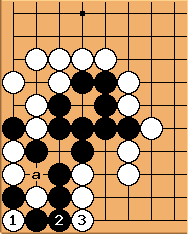 Now Black cannot play A because of shortage of liberties. Any solutions?

Dieter: I think you are right and the solution appears to be ko 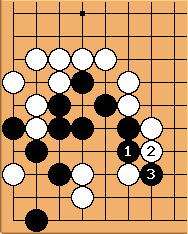 hnishy Black may try this cut first....terribly difficult. He gets many local ko threats at least.