. Fuseki (game) is my tentative reconstruction of the missing link between

Special Tactics 1a and 1b : Dango and Empty Triangles

Contrary to Go, dango and empty triangles are not so bad shape in the movement phase of Fuseki due to the de-emphasis of eyes. Dango are always defensive. However, the necessary intermediate step of empty triangles creates linear attacks to the opposite side of the empty triangle. 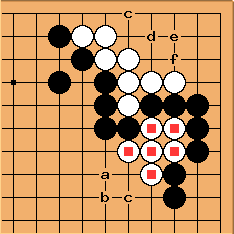 Special Tactic 2 : Attacking From Underneath (Undermining)

Inspired by Go, a chain may be attacked from underneath, on the axis where a stone is already above, by moving another stone along this axis towards this stone. This will capture the stone immediately adjacent to the newly occupied intersection along this axis. A chain attacked orthogonally must be sandwiched along the opposite axis for a capture to occur. 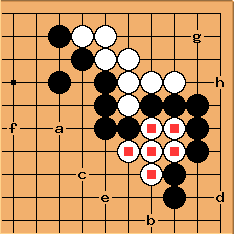 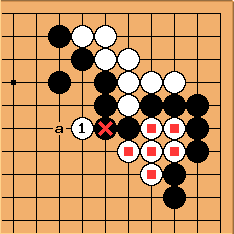 OTF: Attack from underneath example

OTF: Attack from underneath example

Push through to edge

Push through to third friendly stone