Double Go is like normal go, but with each player placing two stones for each move. These stones need be in no particular type of connection. Captures are only made after both stones are placed.

An alternative to komi in Double Go is for:

Note that captures occur at the end of each turn, so it is not possible to flip a (single stone) ko and fill the space in the same move.

(single stone) kos are resolved by using one stone to flip the ko and one stone to play a ko threat. /Limbo positions will end a ko, as both stones must be played to save a limbo group. 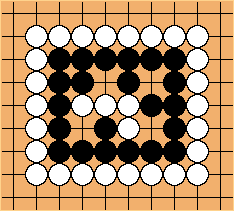 The bent four leaves only one eye in double go, so neither player wants to capture.

Most standard Board Sizes are at the top of each "Line Territory".

9x9 for first. This is for capture go and probably Fuseki (game) tactics.

19x19 for second. This is for tactics and probably Fuseki (game) strategy.

29x29 for third. This is for strategy. Any size this or beyond is probably for Fuseki (game) operations.

39x39 for fourth and beyond. These are for operations.