Fear comes in many shapes and faces.

Fear is an emotion. Emotions are an important key in human intelligence. So, fear is not to be ruled out from our mental processes. However, too often fear replaces sound judgment or analysis. Fear is probably our worst inspiration when playing Go. Rarely do I let pass a player's comment starting with "I was afraid that ..." without criticism. --Dieter

This is probably just a question of how you define fear but I think that when you become experienced in the game, you develop a "sense of danger" which is, in my view, similar to fear. For instance, strong players won't hesitate to play a honte move to eliminate aji even when there is nothing working directly. --AlainWettach

NB that in British English the phrase 'I'm afraid that ...' (for example '...you have just filled a liberty you really needed') is the standard way of not genuinely apologising. Charles Matthews

As I believe that there should not be any page in SL without a diagram, I want to illustrate some of my fears. 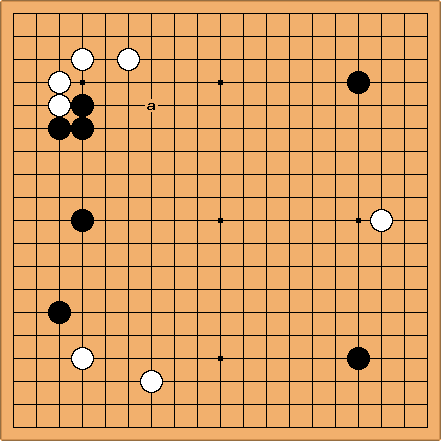 In the situation at the diagram, for example, I am very afraid that black would take a faster.

Can I add "fear of sabaki" ? This is often the reason for slow moves. lezogzog

Floris: What about ph34r for stronger players? The fear of being destroyer, being crushed, and being sliced into pieces and eaten.

Ever tried the Bene Gesserit litany against fear? I think it is rather effective.

Yes, it is quite useful. For your enlightenment, i will quote it here:

I must not fear.

Fear is the mind-killer.

Fear is the little-death that brings total obliteration.

I will face my fear.

I will permit it to pass over me and through me.

And when it has gone past I will turn the inner eye to see its path.

Where the fear has gone there will be nothing.

Only I will remain.