Extending From An Enclosure/ Discussion

isshoni I'm 13k, so my comments are a beginner's point of view....
Section What is the best direction to expand

It could be clearer that the point is to make box-shaped like territories, with a valid link (for example to Build box shaped territories) instead of the link to the non existent page box-shaped?.

About the second diagram: A jump from

would be more illustrative of the point of the section (which I understand is: choose the extension that enables you to make box shaped frameworks) So it could be a good idea to add the following diagram in between the two diagrams of this section: 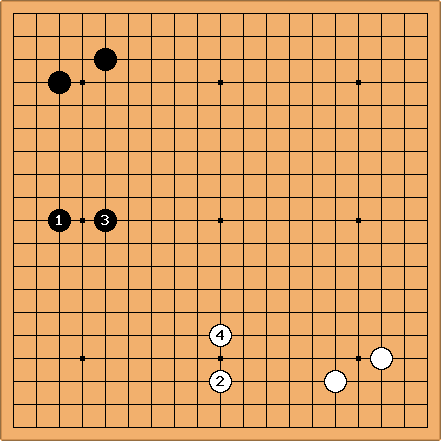 and a comment could be going along this line:

Black's framework/sphere of influence has a nice box shape. It is not flat at all but clearly bi-dimensionnal. Whereas White's position is more flat, more one-dimensionnal. It is less effective than Black's.
Therefore,

(a in the 2nd diagram of this page) is the correct extension from the enclosure; it is in the correction direction. We say that

(a) is in the primary direction of the enclosure.
W2 or (b), on the other hand, even though it's not a bad move, isn t in the correct direction: its follow ups are less promising than "a".

note: I don t know if 'primary direction' is a common english word in go, it s just that i ve read it in by Otake's Opening Theory made Easy.

This diagram could then be followed by your diagram with the

Section Extensions preventing extensions
The sentence "The choice for

instead of a has a more subtle reason." is a teaser to me: either a link should be provided to the curious reader, either, if the explanation in the link is well above the target reader's head, this subtetly shouldn t be mentionned at all, either, it should be mentionned in a note, not in the main text.

Diagram Ideal for both

Remember, I'm weak, both at go and at using SL so please take my remarks lightly...
btw, I'm not even sure whether comments on a page being reedited should be on the Discussion page or not.

markgravitygood: This may serve as a good example: 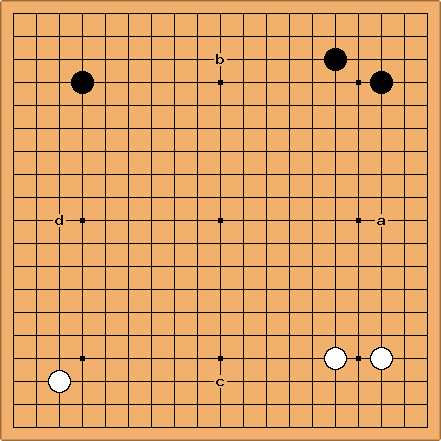 This is taken from the excellent book "Intermediate Level Power Builder Volume 1" by Wang RuNan? 8-dan from Utopian. The example reads:

The value of each of these points (a,b,c,d) depends on the stones that are already on the board. On the right side, Black's corner enclosure at the top and White's at the bottom are both very solid, their directions of development are both pointing at "a". Whoever gets "a" will get a solid piece of territory. On the left side, Black and White each have only one stone in their respective corners; similar to the right side, "d" is the key point for both players. However, unlike the right side, even if one gets "d", his formation on the left will still be weak. So between "a" and "d", "a" is definitely more important than "d". Now let's consider "b" and "c": neither of them is the primary direction of development, so their value is not as big as "a". Also, "b" and "c" are of equal value. With this analysis, it is easy to see that "a" is of the greatest value and should be played first.