Charles Matthews There doesn't seem to be any natural end to re-expressing the thought that go is a balanced game. The only part of the design that is really manipulated by us humans being the board size, there is something to explain.

Perhaps the type of explanation that is acceptable as having helpful content varies greatly from level to level. I'm conscious of other players using variations on the themes mustn't let the opponent get away with too much and mustn't try too hard. Those phrases describe (though in negative terms) the idea of respect for the opponent, kept within bounds.

If the game really does enforce that on us, so much the better. It is a large prize, a convincing way to explain the value of go. One can try to formulate a description in positive terms, despite the difficulties. Aspects of balance are usually tested according to the version of greedy go to which they are an antidote.

One aspect that occurred to me on reading other postings on joseki: you can't gain an advantage by playing out a joseki sequence, unless your opponent's stones are already misplaced. We expect this property: joseki are sound. It does tell us something serious about the position held by the standardised patterns of the game, in relation to overall strategy.

That is, suppose by initiating a joseki sequence you can prove that one of your opponent's stones is badly positioned. It is on a point that is less than ideal, whatever joseki choice your opponent makes. We aren't assuming answers that deviate from best play in a joseki line. Nor are we taking the optimistic view, that the opponent will make a joseki choice that is flawed. There are simply no options that do not have some disadvantage.

A logician's view: what this says is that joseki knowledge cannot be used to prove anything that isn't true. In playing one should use all the flexibility in the position, in conjunction with what has been called[1] reading backwards, to avoid being placed in the position of having a single misplaced stone. Well, that's the theory, anyway, and it illuminates pro attitudes. There is a counter-theory, that of pragmatic, good-enough results. To the extent that accepting small losses says 'I can catch up later', this is somewhat disrespectful, in another direction.

To illustrate the point, here is something known to Dosaku at the end of the seventeenth century. 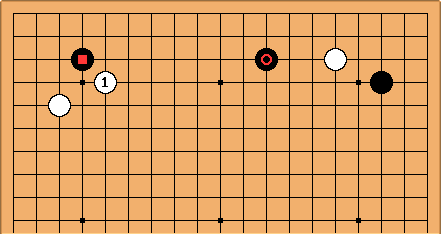 In games against players of the Yasui house, he showed how the press play

here gains an advantage after

This play by Black then disappeared from professional games, once and for all.

is low, given the position of

. Black can be punished, because he has transgressed against balance.

In another and certainly relatively ridiculous example from my own experience, I played this marginal joseki, in a simultaneous display given by Feng Yun. 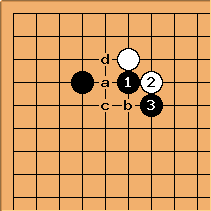 isn't really recommended. But in the game as Black I was interested in the complications, shown in a joseki dictionary, after White a, Black b, White c, Black d. There was a tactical point: I had a nearby stone that would interfere with the 'book' sequence.

Being a pro, Feng Yun played down the sequence quite a long way; and then neatly side-stepped my little 'trap' for a good result. Not quite the one-way street I'd hoped for.

In this case I as Black was trying to force an advantage in a case where White had made no mistake.

I think extrapolation from examples such as these can give a good perspective on go as a fighting game. Let us say that it is naturally an equitable game - the players themselves are the only ones who can try to disturb that. Fighting may appear to be a way to break the easy-going construction of well-matched frameworks. But it is also a way to try to redress the balance of the game once it has been disturbed. Yet another way, not always clearly distinguished from 'disruptive' fighting, is to resist being pushed around, when 'reading backwards' indicates a danger. Overall balance sometimes requires that, for example by means of tenuki, exchanges, or the use of ko.

In the middle game one may have just as much faith in the idea of sound play, as in the most common joseki. The particular position may never be repeated: certainly not in one's personal experience. But it should conform to the same basic principles:

Some of the thoughts at middlegame joseki are related.

By Matthew Macfadyen. Means recognising a blocked configuration or other unacceptable result coming ahead, and adjusting variation accordingly.