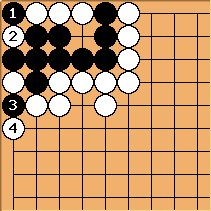 The sequence "could be improved" -- well, I'll worry about that after I get the conclusion right. The answer is not ko, although it looks like a ko here. So it must be that one side cannot win. Can black win? Sure: ignore the white ko threat, and capture all the stones. Can white win? No: best is sequence through 4,

at 1, and the black stones have a double ko going, and can't be captured. This is double ko death, but in a different form than the kind that confused me before. There, both kos were between the groups in the capturing race, but one side had an eye. Here, there are no eyes, and only one ko between the groups, but Black has an exterior ko.

Going back to the original problem, since White can't capture, even in ko, the best White can do is a gote seki. (Exchanging a for b is unnecessary and could cost a point: without the exchange, if Black c, then W a, B d, W b leaves the score unchanged from the seki under Japanese scoring, or costs Black a point under area scoring. Though the details are different, exchanging a for b is bad regardless of the rules.) 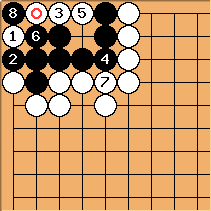 HolIgor put this problem in his go blog. If Black ignores

, I think the best White can do is get a ko. If

HolIgor: The sequence could be improved a little but basically it is correct. The conclusion is wrong. And that is very important.

One of the most appealing aspects of go, at least to many Westerners, is the simplicity of the game's fundamental nature, particularly in light of the highly complex game dynamics that arise. The game itself is very simple: players vie for control of points, alternately placing a stone on them; stones not connected to an empty point are removed. It's quite easy to write down mathematically precise rules that govern play, which are perfect in their crystalline simplicity. However, it's not always so easy to legislate the details of actual competitive play between individuals whose interests are not aligned. Thus, we get tournament rules about ethics and sportsmanship, usually undefined, and controversies involving things like whether playing on the 1-1 point necessarily means resigning, or otherwise being insulting;

circumstances where playing any move whatsoever is considered poor sportsmanship, and so on.

Part of the problem is that go, as it is usually played, has no clearly defined end. Bill Spight wrote in one discussion of lightning rules that go is "infinitely prolongable", and while that's not quite true, it does speak to the problem of a player unwilling to play in a way which hastens the loss (e.g., by resigning, or passing). The RBerenguel/GoBlog2006-2007 relates an example of this mode of play: facing a clear loss on the board, his opponent made many pointless moves, in an apparent attempt to extend the game and thereby punish the victor. I've also seen an example of this, in an online game between two dan-level players. The loser was being quite careful and intentional: he/she was using 27-29 seconds of each 30 second overtime period for each pointless move, and had succeeded in extending a quick online game by an hour or two. You can imagine what might have been going on inside the players' heads. The game had attracted quite a large and vociferous crowd before the loser finally resigned. Interestingly, both this player and RBerenguel's opponent defended their actions by reference to their opponent's use of time earlier in the game.

It's easy to condemn such behavior (note that I called the player "the loser"), and in fact it's precisely this kind of thing which people are concerned about while drafting sportsmanship rules. The problem is that it's difficult to define. First of all, this delaying tactic requires the use of only explicit rights granted by the rules: right to make a move, right to use the time on your clock in any way desired. Second, one can always find situations which seem to land on the edge: making one additional move to run out the clock in a lightning sudden death game, weaker players who may not know which moves are "pointless", etc. And finally, I have a certain sympathy with the spirit of raw competitiveness. I'm reminded of the story of the condemned man, who asked the King for a reprieve, promising that he would teach the King's favorite horse to talk within one year. The King, dubious but curious, agreed. A bystander asked the prisoner what he hoped to gain. In a year, anything can happen, he replied. Perhaps the King will change his mind. Perhaps I will be rescued, or the King will die, or the horse will die. Who knows, perhaps in a year the horse will learn to talk. It's not like I have anything to lose.

In games with clear and definitive ends, like chess and checkers, the act of playing on in a losing position is unremarkable. It's called resistance, and one metric for strongest resistance would be how long you can postpone the ultimate end. Against perfect counterplay, the form of resistance is irrelevant, but imperfect players often lose games that they could have won. Even when faced with a fairly elementary mate in chess, for example, it's not unusual for people to play on, essentially demanding that their opponent prove their victory. By the same token, closing a won game off in a simple, crisp, and short manner is considered a basic skill.

Could one take such an attitude with respect to go? It's clearly much more difficult to, even if go isn't infinitely prolongable. However, it's also clear that most players don't know and haven't thought about how to close off the options of a delaying player. The necessary tactics are pretty simple, and are related to no-pass go: don't pass, don't capture, turn territory into one-point eyes as quickly as possible. Once the opponent runs out of legal moves, they have to pass, resign, or let their clock run out. Still, it can take quite a number of moves to fill the board, so perhaps this will always remain an area of controversy and adjudication.

I've written previously about the application of theoretical physics to events on the go board. There's

another report (Word .doc format, linked from Gobase) with a similar idea: measure the size of clusters, look for scaling. This time, the authors look at a database of games, rather than random play, but in broad terms the results show similar evidence for scaling behavior. (A cynic might claim that everything is linear on a log log scale. And this is certainly true, particularly if you don't have many decades of data to work with, and you're willing to resort to the word "multifractal".)

One thing that I don't recall seeing in either paper is discussion of edge effects. This is a little surprising, especially considering the importance of corners and edges in actual play, plus the fairly small size of the system. I'd guess that PointPopularityByMoveNumber tells us more about the structure of the game tree than cluster size diagrams.

Of course, sometimes physicists are just

So Benjamin, the only Western insei at the moment and one of not very many ever, is going home. I feel sad about that. I don't have any right to, of course: it seems that he's in a difficult situation, and he has to live his own life in any case, and should not have to worry about what the fans out there in the go world might think.

Still, I think the go world ought to consider the plight of Western fans, actual or potential. (And by go world, I mean groups like professional organizations, leagues, and so on.) Having Western pros is important. It's much more interesting to have a home team to cheer on, someone you can connect to. Peak performance is not actually that important: I've had as much fun, perhaps more, going over various insei games as going over the games of top name pros. Top pros create games of nearly flawless excellence, with nothing for a guy like me to appreciate, but inseis will make mistakes that I can understand. It's like watching minor league baseball: you're down close to the field, and can see the players' faces. They drop the ball sometimes. And you can connect with them: almost fool yourself into thinking that, with some work, you too could play that well. Plus, there's the rich and endlessly repeated story of trying to hit it big by making the majors, a story mined by Hikaru, First Kyu, and zillions of bad baseball books.

If expansion into the West was important to the go world, they would be thinking about how to recruit guys like me as fans, and how to retain guys like Benjamin. Somehow, it doesn't seem like that's the way it is.