The game is one between Otake Hideo, playing White, and the incomparable Takemiya Masaki. Although I've vowed to study Otake, who's one of my idols next to Kaoru Iwamoto, it is often said that Takemiya is the best pro to study, because he plays a very natural Go that is at least superficially easy to understand, even if there is a lot of depth in his moves. This game seems to confirm that, as it is a sweeping victory of influence over territory. 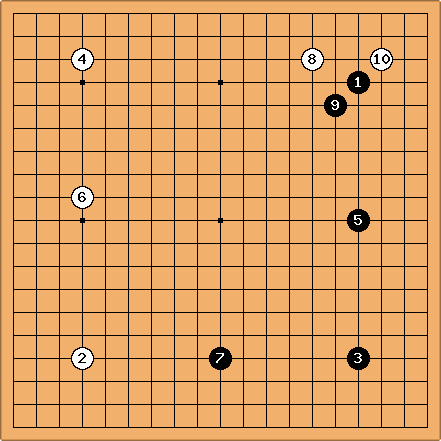 is a typical move of Takemiya, stressing his intention to build a central moyo. 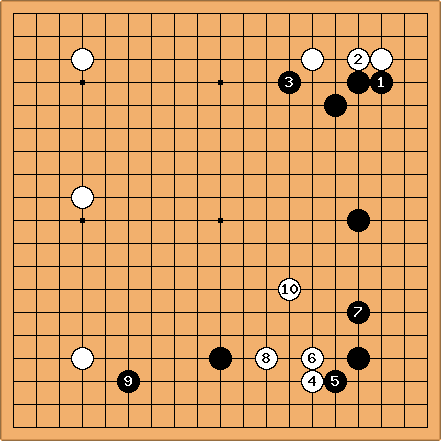 Takemiya of course* blocks at

and makes the good haengma of a kosumi with keima. Otake dares not making more territory at the top and invades at

right away. Follows the 4-4 point diagonal attachment joseki we all know, where the invasion group lacks a base and is under pressure.

makes shape for that group immediately, allowing Takemiya to attack the lower left. 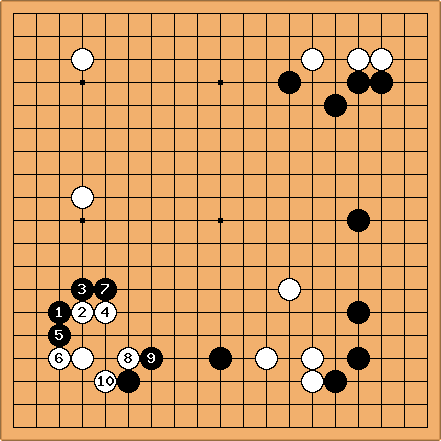 It is very important to learn from Takemiya that he does not create central moyos always: if the opponent negates that construction, his moves are always aggressive enough to attack where the opponent had neglected to play. The lower left produces another well know joseki. 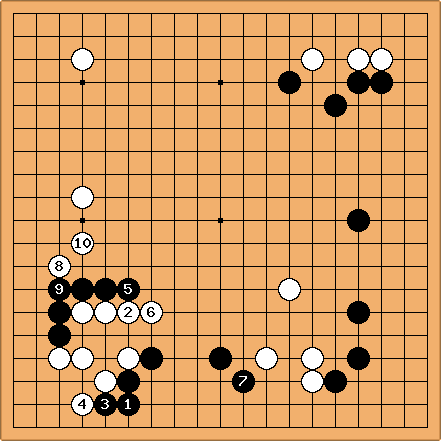 is an often underestimated kind of move: even if on the second line, it is very important for the thickness of either group. 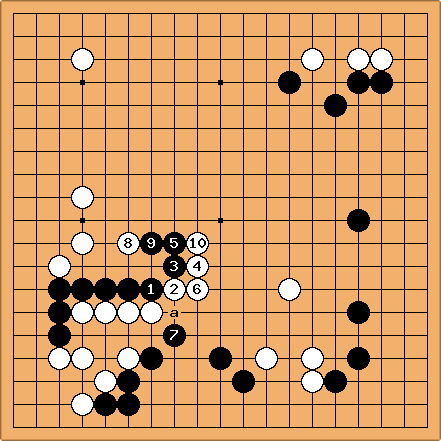 This diagram is a battle for shape. White plays double hane, intending to play a hanging connection at

next, but Black plays there himself, upon which

destroys Black's shape by playing the vital point of the table shape. Otake obviously refuses to connect at a which would give an ugly empty triangle and strengthens his stones with 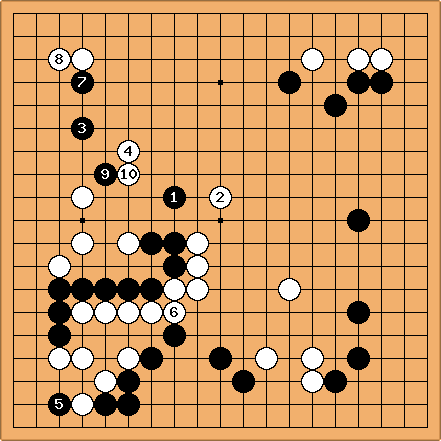 But Takemiya is on a roll. His next attack comes at

, splitting the left side. When White plays the somewhat vague

. Incidentally, I was surprised to see

, taking even more territory, while I would think White can use some support for all that fighting. 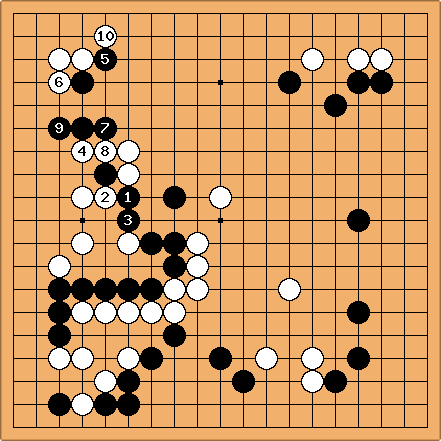 Both players make shape in the battle zone, then Black pushes against White's corner to create another influential group. 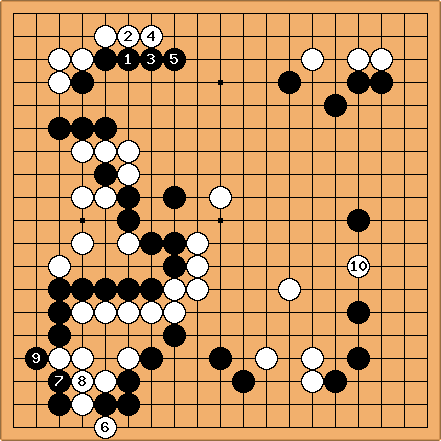 We see in the lower left how White's eye shape is destroyed.

is hence a bold move: apparently Otake feels he cannot allow even a 4th line moyo to appear, or maybe he thinks he is thick enough to play here. 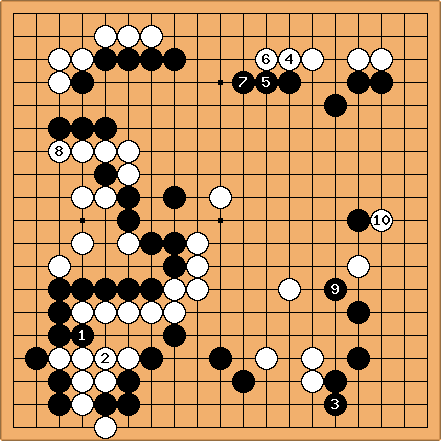 Otake is giving Takemiya his favourite present: more influence. I must say I'm not getting it: White is not quite thick in the centre. 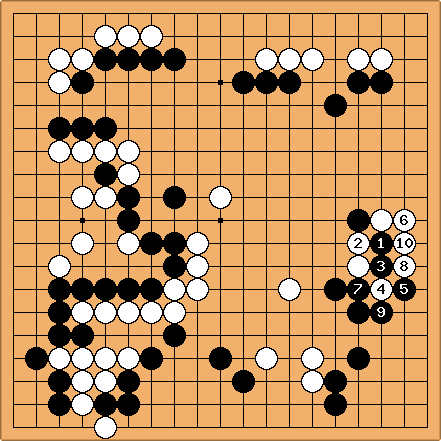 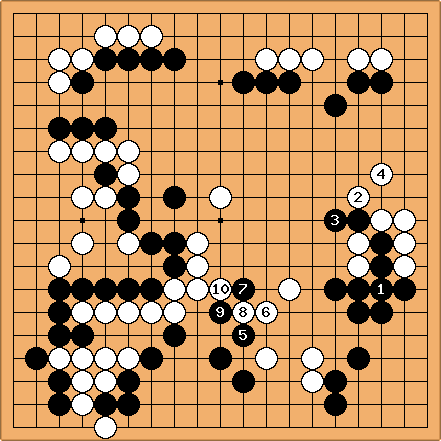 , White creates a position at the right, apparently trying to turn the black group above it into a target. But Black has more pleasant business to address:

sets up a splitting attack. 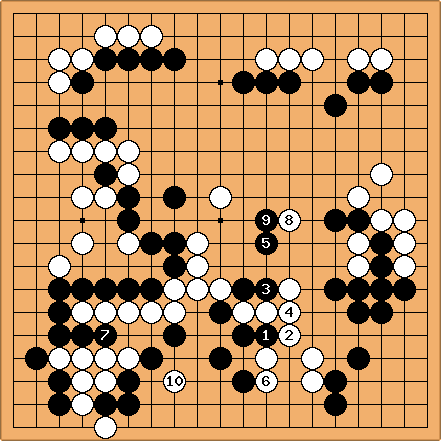 A bit of a strange interlude is provided by

. The 20-ish points at the bottom do not outweigh a central capture, so Black responds at

shows a clear intention of killing a group.

is a beautiful resistance. 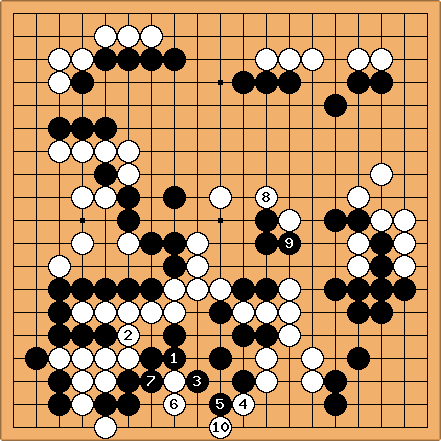 But Black's shape is resilient ... 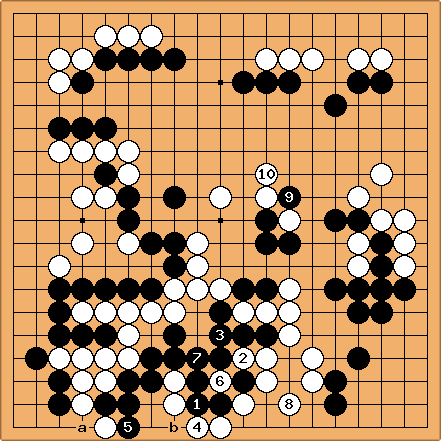 makes miai of a and b, the latter creating shortage of liberties. I find it impressive to see how Takemiya keeps things simple. He's in command and there is no need to resolve to ko.

lives at the bottom and Black continues to attack the other white dragon. 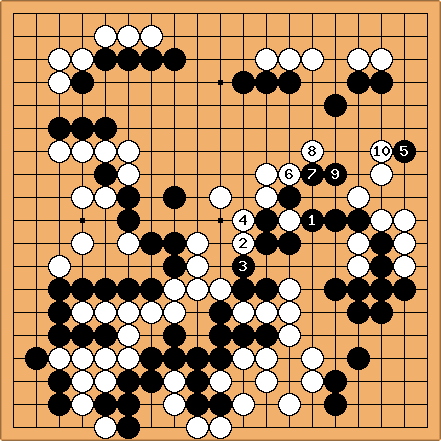 is extremely thick. It seems Black has it all figured out. Indeed, with

the third white group is under attack. 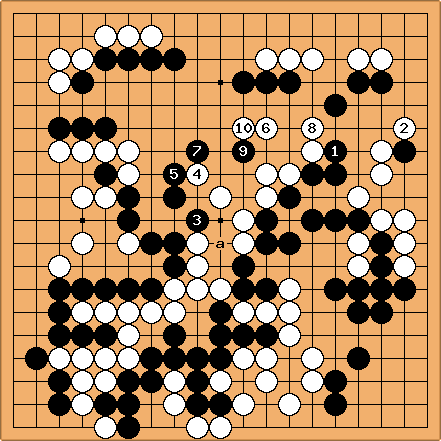 Black lures White into a small gap and splits it at

is another surprising eye destroying move. Incidentally a does not split White, so all appears not to be lost. I cannot read this life and death problem, but I believe firmly Takemiya had it all figured out when he captured at move 141. 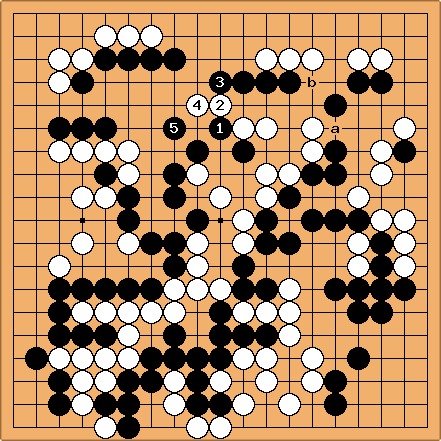 This is where it ends. The white dragon dies. During the whole fight, White has not been able to explore any weakness in the surrounding position. Especially

is needed to defend against cuts a and b.