If someone could verify/clarify the contents of this page that would be much appreciated. If it is correct then this should also be linked to from half-point ko, area scoring and perhaps ko-threat.

Under rules that use area scoring (such as Chinese, Ing, AGA, New Zealand) locations that are refered to as dame are often worth points.

For the purposes of these pages, a dame under area scoring is an empty location on the board which, if played by either player, would be worth 2 points in gote (deiri counting) to that player. 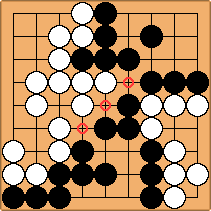 The dame-master is the player who has the right to the final dame on the board.

In an even game, when the dame-master also plays the first dame, no player has passed, and there is no seki, territory scoring and area scoring differ by one.

Jono: I thought the difference in seki scores was only because Japanese rules didn't count eyes in seki. If this "feature" didn't exist wouldn't the seki values be the same under both scoring methods?

Even Dame and no ko

If there is an even number of dame points (so the player is not a Dame master) and there is no ko (see below) then there is something strange going on.

Whatever the player does it doesn't influence the outcome (except killing yourself).

Even passing has no influence. This is because the number of dame's is even both players will get (at most) half of the dame points.

The unexpected result is that both players can pass and the game can end before all dame's are filled. Even in area scoring How do rules deal with this?

At the end of a game there is often a final half-point ko to be played out. By miai counting a half-point ko is worth 1 1/3 of a point, and dame 1, so it is normally best to fight the ko if possible rather than filling dame. (It is always best to take the ko, but sometimes better to fill a dame rather than win the ko.)

In standard environments, all cases with ordinary dame, basic-kos elsewhere and without teire have been

solved by RobertJasiek including the endgame values proven mathematically.

When there is only one dame remaining it is simple, fight and win the ko if you are ko-master, otherwise take the dame.

When there are an even number of dame and one half-point ko, you once more wish to fight the ko. However, the opponent can use dame as ko threats, since if you fill the ko you will no longer be dame-master. If this means you are no longer ko-master, dame should be played, until your opponent is forced to connect the ko.

When there are an odd number of dame and one half-point ko, even if your opponent plays a dame point, you can fill the ko and remain dame-master.

If black had two external ko threats and white none, black can win the ko and take two dame. Giving black 4 of the contested points.

If black has only one external ko threat, the best he can do is to play a dame ko-threat, which white will ignore to connect the ko. This gives black 3 of the dame points.

If white has three more external ko threats than black, she does not need to ignore any of black's dame ko-threats, and black gets only 2 of the contested points.

If both black and white have no external ko threats, black can take and fill the ko and still take 2 dame. Giving black 4 of the contested points.

If black has no external ko threats and white one, black can only take 3 dame.

Removing the Obligation to Fill

MrMormon: Most would agree that the obligation to fill dame is an undesired side effect of area scoring. Simply disallowing dame plays would fix this, but is the loss of distinction between even and odd dame desirable? Also, does dame even have a formal definition?

willemien: I disagree. not filling dame can lead to Teire problems, and it is also quite impossible for weaker players to play out all the dame plays. (try to play out japanese professional games that lead to a half point win/loss, do you get the same result?

MrMormon: Personally, I wouldn't call those points dame. Also, it is a fallacy to argue against a scoring rules change (like they probably did with komi) by pointing to games whose results would have changed; they would have played differently too. I'm wondering if

a) the loss of distinction between even and odd dame would have advantages (what about granularity?)

b) a formal definition of dame, excluding (if necessary) status-changing ones, exists/can be made

Bill: Formally, the obligation to fill dame has existed under Japanese rules since 1989. However, only in recent years has it become customary to do so in pro games.

MrMormon: To clarify, by 'obligation' I mean 'or else lose points' and by 'formal' I mean an algorithm.

willemien I don't think that granularity has anything to do with it, although with Ikeda rules or button go to pass early is better. (and can therefore have the result of leaving dame unplayed), the rules need to be a s simple as possible, so introducing a complicated term as dame to it is not advisable.

MrMormon: The concept of territory is more complicated than stone scoring but removes boring obliged moves, though. And while you brought it up (is there a better place to take this?), I disagree with complications like pass stones; use the right komi. As for button go, multiple-button go allows arbitrarily fine granularity, so what's the point?

willemien Because the concept of territory scoring is (much) more complicated than area scoring it fits better in a rule sets. But i agree lets move the discussion to the