Cho U's Tsumego (張栩の詰碁 Cho U no Tsumego) is a very difficult tsumego book with a novel approach written by Cho U. The hardest problems have subproblems, which consist of refuting a single possible line of play. The subproblems are considerably easier.

Bill: The problems range from low dan to pro level. It has three customer reviews on Amazon, Japan, all 5-star. Interestingly, two are by double digit kyu players, who love the book. That says a lot. I'll probably get the book when I go to Korea.

Bob McGuigan: I have this book and it is very interesting. It begins with a simple list of 53 problem positions composed by Cho U, all with difficulty ratings ranging from one star (kyu level) through five stars (pro level). After this there are five chapters. The first is a detailed analysis of life-and-death problems that occurred in Cho's actual games. This includes the moves up to the problem position and also analysis of the variations stemming from the problem position. A good demonstration of amazing real-game reading power. The next four chapters are devoted to the problems from the initial list. In many cases hints are given and for those problems the difficulty rating is reduced somewhat. Detailed illustrations of the solutions are provided, often with as many as ten illustrative diagrams. Often, in the course of the explanations, finishing the problem after seeing the analysis up to that point is proposed as an easier problem. 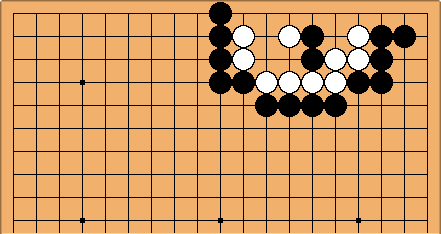 This book may be obtained from