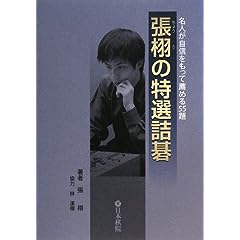 張栩の特選詰碁 (Chou U no Tokusen Tsumego, Specially Selected Tsumego by Cho U) is a collection of tsumego problems composed by Cho U, published in 2008 by the Nihon Kiin. The amazon.co.jp page for it is

Bob McGuigan: Unlike Cho U's Tsumego this book includes less difficult problems. There are 55 problems ranging in difficulty from 1.5 stars to 5 stars. Cho says the problems are basically for players shodan or stronger; problems rated three or more stars are suitable for high dan level players. For some of the more difficult problems Cho gives some of the variations as easier problems. About a third of the problems result in ko, including approach move kos. These problems are probably too difficult for most kyu level players but Cho writes of enjoying tsumego problems, meaning puzzling over them for a reasonable amount of time then marveling over the solutions and variations.

The book begins with simple small diagrams for all 55 problems. There follow three sections in which each problem is stated with a large diagram and solutions with analysis of variations are given on the following pages: 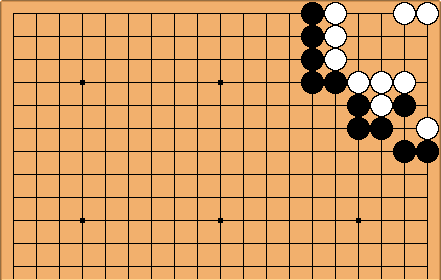