David: My attempt (see a better solution below): 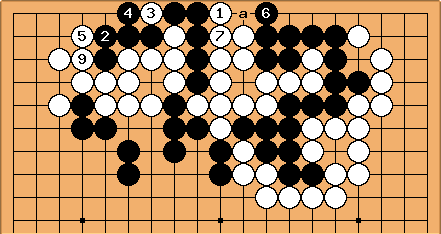 prevents an immediate play at

and makes an approach move necessary before Black can play at a. It also forces Black to connect on the left (see the variation below).

forces the capture at

, Black can approach at

forces a black connection at

wins the race for White.

is the approach move: 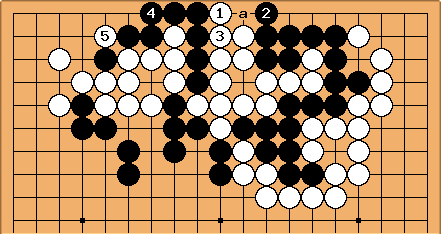 Once the white group has secured life, the black group on the right is dead as well. Black is left with a ko threat at a.

Reading positions like the one in this exercise is one of my major weaknesses. I would like very much for others to comment on my solution.

Alex Weldon: Perfect marks. Now, as I said on the page for the example itself, I'm only 12k* IGS, so I may have made a mistake, but I don't think so. This is the solution I had in mind, and I believe it to be correct. If you would be likely to see this solution in the course of an actual game, your reading skills are up to scratch for at least 15k* IGS, probably better, I'd say (I often notice that my opponents often miss such tesujis, and I'm sure I miss some, too).

is sente, it's okay to reverse the order of

(or one to the left) and White capturing at

might leave aji in the top left. (In my game, I was strong enough on the left that it didn't matter).

, while saving White's stones, risks letting Black's stones on the left make at least ko. First, let me show my solution. (See here for a better one.[1]) 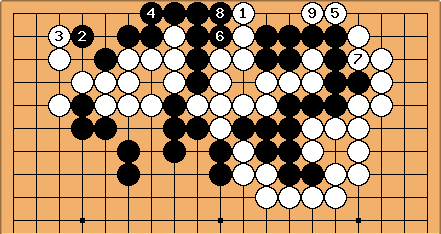 wins the fight with the Black stones on the right, despite the fact that Black appears to have one more liberty. After

, Black loses by me ari me nashi. He cannot play atari on White without putting himself in atari. Black is dead on the left. The danger of 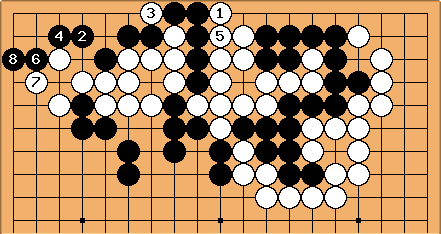 If White does not take, Black can get a ko for everything. 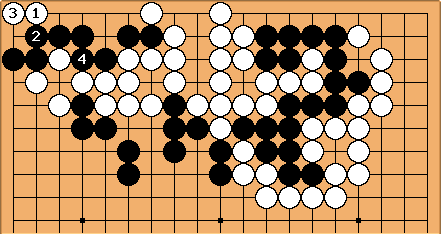 holds Black to one eye in the corner, maybe bent four. (Black does better to make the ko at his first opportunity, I think.)

Alex Weldon: Thanks Bill. I had a feeling my solution wasn't perfect. Yours is clearly better. Thankfully, during the actual game, my opponent didn't see that he could get ko in the upper left.

Bill: It looks like you would have crushed him, anyway.

Alex Weldon: Yes, I would have. :) It was a very one-sided game. He should have resigned long before this capturing race occurred, but IGS players never seem to resign, except right before the dame are filled.

David: Thanks, Bill. I see that your

is a cleverer response to my

. What happens, though, when White plays

? Does Black have a defense that I don't see? 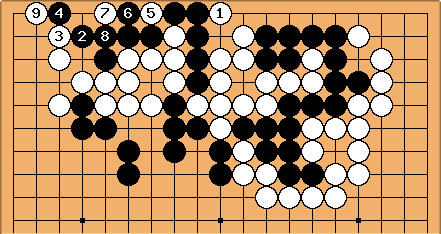 Bill: Remember how often my play is the opponent's? Since White did not play at 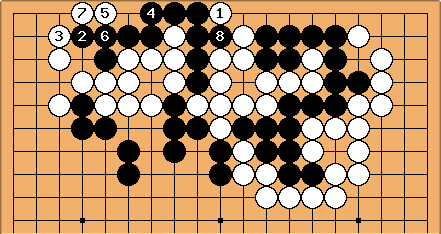 , White must throw in at 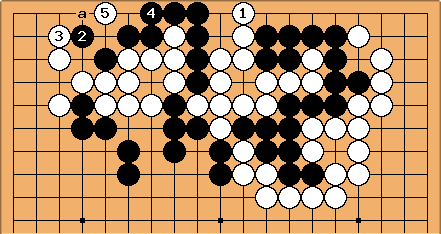 , the Black group on the left still does not have an eye, nor does it have enough liberties to slug it out with White. Even if Black makes the eye with Black at a, it threatens nothing. 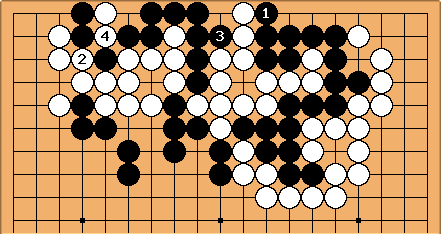 , Black will have only one external liberty on the left, and will not be able to capture the White group, even if White tenukis. This is not seki, because White can capture the Black group on the right. This solution is better, because Black has fewer ko threats.