Alex Weldon: This is a capturing race from one of my games, which I ended up winning, forcing my opponent to resign. It should therefore be a good example for players around, say, 15k or weaker. It isn't too hard.[1]

Disclaimer: I'm only 12k* IGS right now, so there might be something wrong with this exercise. In fact, up to this point in the capturing race, both my opponent and I have made several mistakes, which is why the example starts here. However, I think that I've checked out all possible variations from this point and determined that there's only one solution, and that the solution works. If I've made a mistake, let me know, and I'll try to fix it. 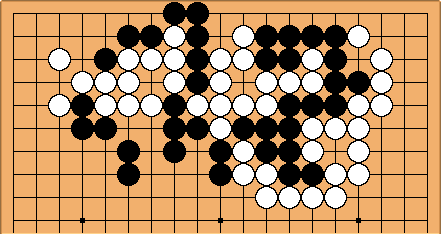 Obviously, all the stones on the outside are to be considered alive. The only groups being contested are the two black groups and one white group on the upper side.

If anyone's curious as to how this situation arose, I had a weak group of white stones running out of the bottom right, and played a move which made miai of saving those stones (by connecting them to the white group on the right) or sacrificing them in order to cut off and kill the eyeless black group in the upper right. Including a large framework I had on the left, I had a large lead, probably 40 or 50 points. Rather than resigning, though, my opponent played on until the late middle game, then went for the "cut absolutely everywhere and hope things get too complicated for your opponent to read" strategy, which eventually led to this capturing race.

[1] Bill: It isn't that easy, either. I would be happy to see a 5 kyu come up with the right answer.