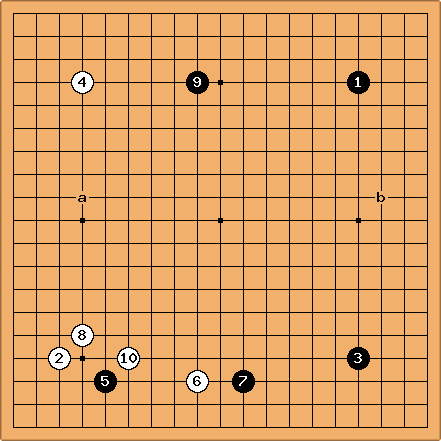 is exactly what I wanted. Even now the white stnoes looks overconcentrated. I don't think any attack on

looks so threatening. White could play at b and if Black attacks

, again one could ignore that and play at a. 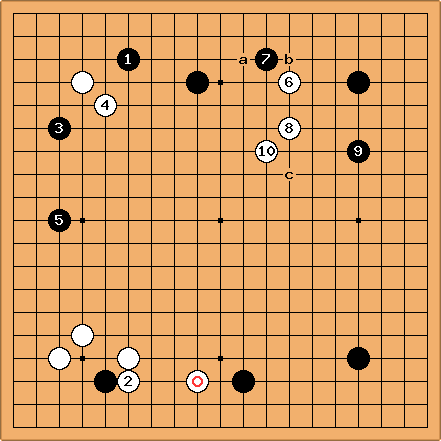 : Andre Engels: Too slow. White is using too many stones to capture one black stone, making

: Andre Engels: Strange move. Better to stay one step further away from the stone, for example at a.

: Andre Engels: Better at b. A black move there is big.

Orcun: b was what I expected, too.

: Orcun: Why I did not play at b then? I usually like to create more complex board situations instead of just taking advantage of a bad move. But later on I have totally forgotten that opportunity.

: Andre Engels: Too slow, and not so good shape. White should either leave this position alone, or jump out normally with c. 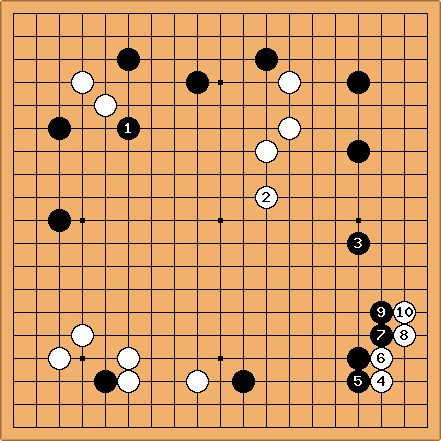 : Andre Engels: Interesting move. But whether it is good? I doubt it. The direction in which it is working is not at all clear, and the black position is quite easily cut through.

Charles I've seen this discussed in Go World - a kind of pro-level trick play? Might not be objectively so bad, here. Is this thing in joseki dictionaries now? Scary.

Orcun I know it gives white the opportunity to decide the line of play but I think it is very hard to decide which side is better for white. I haven't seen this kind of advice but I believe it may be a good style of playing, especially against computers. I am waiting for your opinions about this. 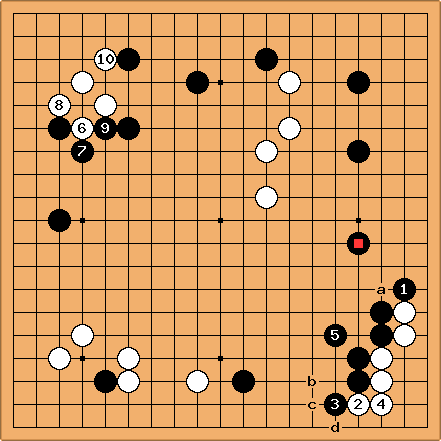 : Andre Engels: Better at a. The gain in points by playing at

does not compensate for the loss in thickness.

Orcun: I guess I did trust on

had been at a, joseki would have been b. This tries to patch up the shape; an obvious weakness is left at c.

isn't such a bad play.