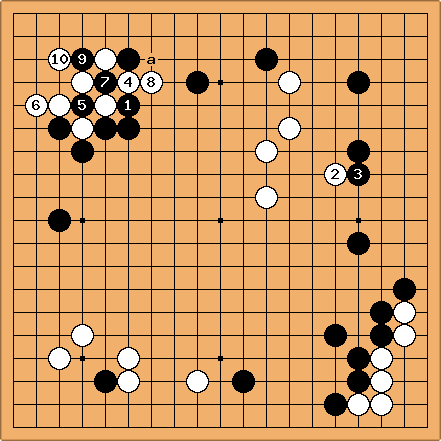 : AE (Andre Engels): Bad. This exchange helps black a lot more than it does white, a typical case of a thank you move.

: unkx80: Normally this is played at

instead, to be consistent with

: AE: Bad. White must connect the ko at

: AE: This is an overplay, but neither player handles the follow-up correctly. Black should have simply connected instead of playing

. White probably has to defend the corner, after which black can play a, turning

into an outright loss. White should have taken the ko instead of

, black does not seem to have ko threats (and even if he had, forcing him to use one of them would have been a good idea). 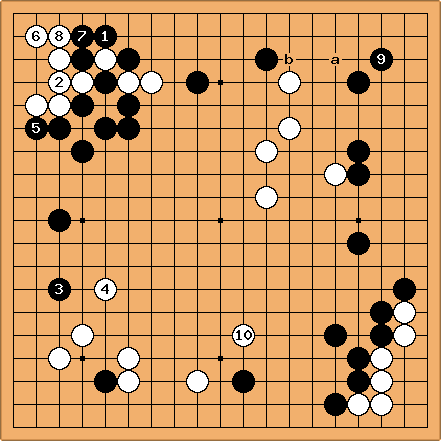 : AE: This corner is an enormous success for black now.

instead, white is probably dead.

: AE: Too shy. Black a probably secures the corner as well, and also has an enormous follow-up at b.

Orcun: I was still trying to make b a bigger move for black and make it less effective for white since even if white cuts, two black groups are large. I guess a would make white to play b immediately. But I have to agree that a would be a better move against a stronger opponent. 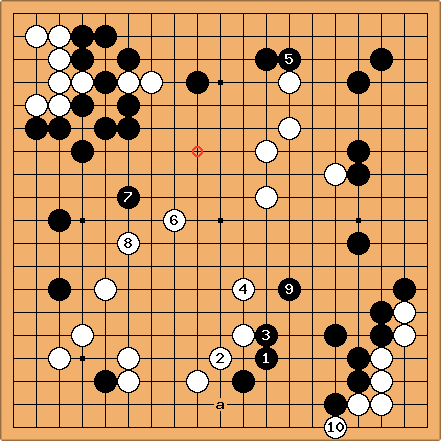 : AE: Probably better at 2 and fight.

: AE: Too small, black should either reduce deeper (for example at 8), or leave the whole position and play elsewhere.

Orcun: I was planning to play

at the circled point but again I forgot my plan, but White remembered with

in the following diagram which made both

small. I seem to play conservative when I think I am in a good position.

: AE: Also too small, endgame. And there are bigger endgame points in this position, like a.

Orcun: I cannot see why a is a big endgame move. I know I should have played it since it keeps sente but does that make more than 4 points? Still,

was a big big mistake.

: AE: Being much behind, white has to find something else than this. 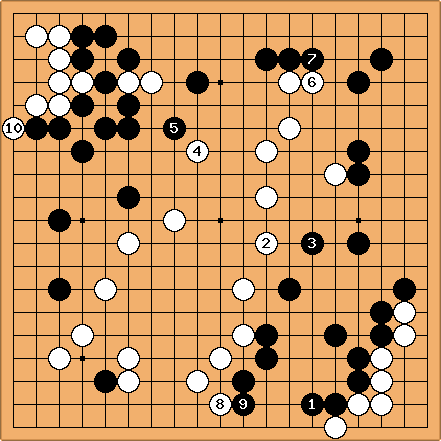 : AE: Black keeps playing this kind of moves. Remember that in general the largest endgame moves (and this is clearly endgame - you are not trying to attack or defend any groups, just score points) are usually on the edge.