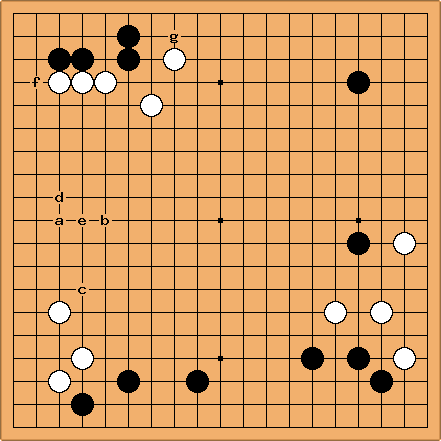 tapir: I guess I am back to calling myself 1k. This is a recent tournament game. Black (me) to move, the obvious idea was to handle the left side, I played in "the opponents good point is my good point" fashion an invasion below the star point, the result of which wasn't that great. My opponent proposed b after the game? Where would you move? Invasion or reduction or something else altogether?

fractic: Might I ask how the game continued? a was also my first idea upon seeing this position. I wouldn't want to play elsewhere since white getting to play on the left star point would be too good for her. If you'd want to reduce i think b is a rather vague move, but c looks plausible.

Slarty: the point above a leaves miai for two true two space extensions, and the corner can still live after ignoring white's descent on the second line, so though it will be ugly, d wipes out white's territory. The star point looks like a good compromise where white struggles to enclose the area above (checking extension on fourth line leaves attach underneath), and black can next extend to c. a should be fine (though it feels "meh"), maybe with two one space jumps to the center; then you can take the big point in the lower left while attacking. For a fifth line move, the point above b seems hard to answer.

tapir: With fourth line invasions I always feel like I make an invasion but end without a base, not really invasion, not really reduction. Didn't play d because I don't really like the result after being approached from the lower left. I guess whether you can leverage the cutting point is important, maybe for this reason d is actually better, not sure.

Dieter: If an invasion of the left side would succeed, then White ends up with almost no territory. This would indicate that White has made some kind of gross mistake. Indeed, the upper left joseki lacks an extension, but no territory? No, that seems to harsh on White, which means Black is overplaying. It's worth pointing out that f is almost sente for White.

Slarty (reply to Dieter): While I would certainly bet more readily on a compromising approach at all but the high dan level (and I am too weak to solve the continuation position), I do want to defend d, which is the only severe move available to punish white's borderline-silly upper left. We are told to seek severity as much as avoiding overplay/failure.

It is not harsh quite that way on White, because as we've said, f nearly sente will go unanswered - when White jumps in, Black will attach at g to manage life while White builds (if instead White hane to attempt kill, Black should cut). So at the "end" of that result, White has almost no territory in the upper left, whereas Black has almost no thickness. 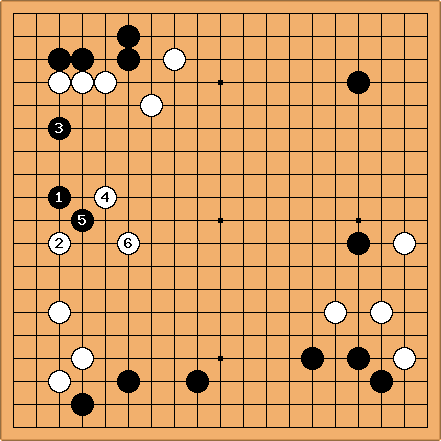 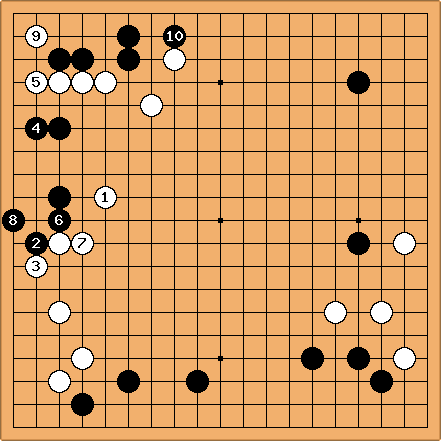 tapir: Looks ok to me. Game went as below. I ended up needlessly strengthening White towards the center in the next moves not shown here. 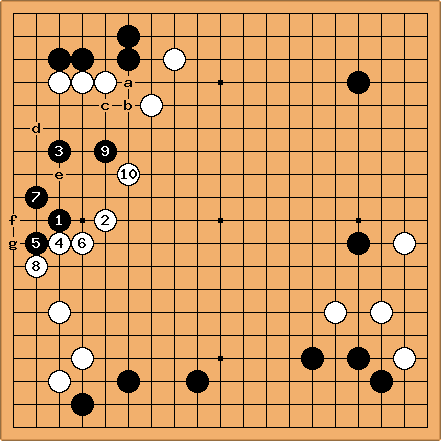 Dieter: I would expect

at g. This invasion went far too easy for Black. White has influence, but is rather thin than thick. 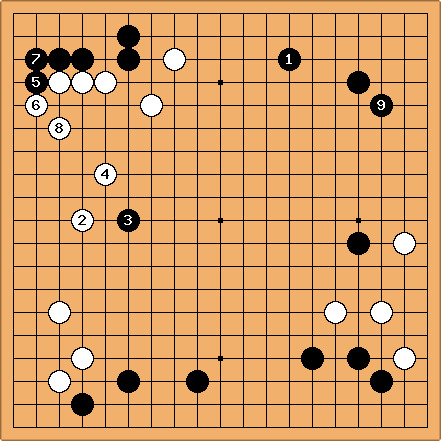 Dieter: is the left side urgent at all? Aren't all White's eggs in one basket and one which is not too impressive at that?

Slarty: yes, it is urgent, for the effectiveness of the stones of White's wall. Black has less chickens here, and w sente guarantees an even result... it's the urgency of a mistake/opportunity, as if whoever plays first on the left plays somewhat more than one stone.

tapir: While this is on the boundary of "joseki deviation punishment" thinking, White's joseki choice in the top left looks perfectly fine with a stone at or around a, it did not to me without it, so my first idea was to play around that point myself. 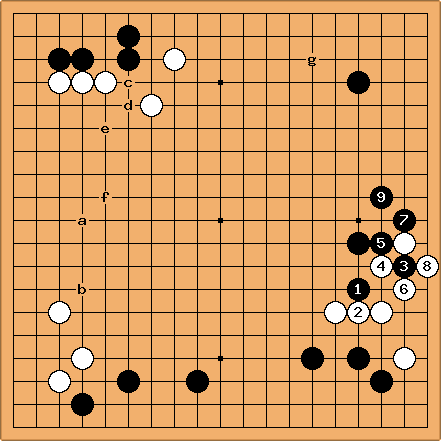 DrStraw - If W plays on the left then the obvious point is a. But this seems a little unsatisfactory because B can later play at b. He can also play at c followed by e and f after Wd. All-in-all, I do not see the left side as urgent. 1-9 looks playable and B gets a nice position on the upper right. Approaching at g for W is not too exciting because any W position at the top is undercut by B at the top left. If W plays a after this sequence then B can play the moves already mentioned.

Slarty - e is not forcing then and b is very deep considering W's forcing moves on the lower side. If the resulting game below can still be said to be a little unsatisfactory for White, wouldn't you agree even so Black did not seize an opportunity to take an actual lead.

Dieter: Indeed, a successful invasion like the one tapir actually got in the game would take advantage of White's poor choice of direction. But I cannot find an invasion which is downright successful. I agree though that the below leaning sequence puts White in the game. 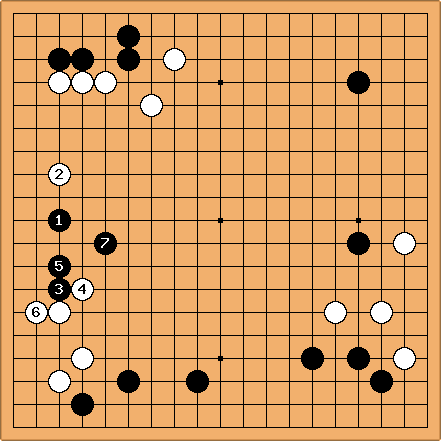 How about this? I would not ordinarily touch the white stones with

, but I still prefer this to approaching the influence at the top.

tapir - in the game I ended up unable to play the sequence on the right, as I felt the urge to counteract what looked to me like a threatening White center build up w/ an vague, underperforming move instead of starting it (or patching the lower side defect). I felt like the invasion (the way it went) was a contributing factor to this mess. 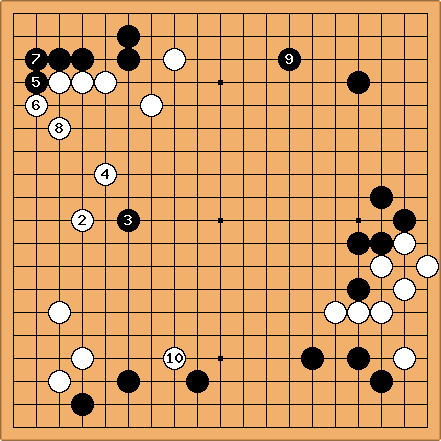 Bill: I wonder if this is one of those positions where you play a wedge, but then when it is approached, jump instead of extending. 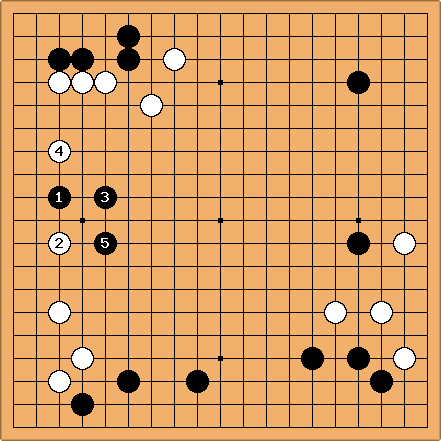 can Black be satisfied? 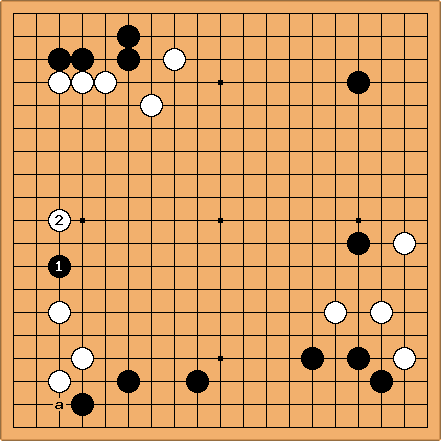 seems interesting. It aims at a...

tapir: Doesn't this allow the quite comfortably spaced extension at

, so Black will be quite busy for now until he can comeback to schemes around a? On the other hand

feels a bit like playing from the wrong side.

unkx80: My intention is just to present an idea, not necessarily better than Bill's diagram.

Ultimately, the whole point is to produce a reasonably safe group on the left side. 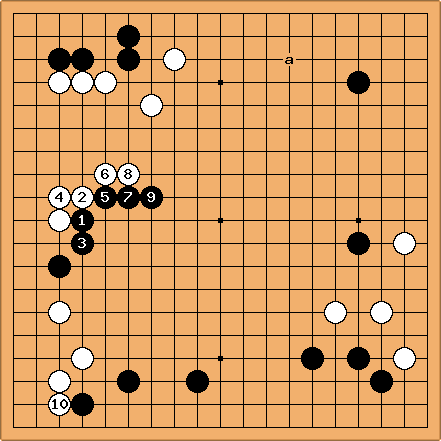 , Black has sente, perhaps to play at a. Notice that White doesn't have much development potential all over the board.

Dieter: I get the idea but it looks to me that Black has helped White to make natural territory in two places. All her groups are stable, she has komi ... Black had the territorial advantage and gave it away for some central influence which is now hard to put to use. So I prefer Bill's idea :) 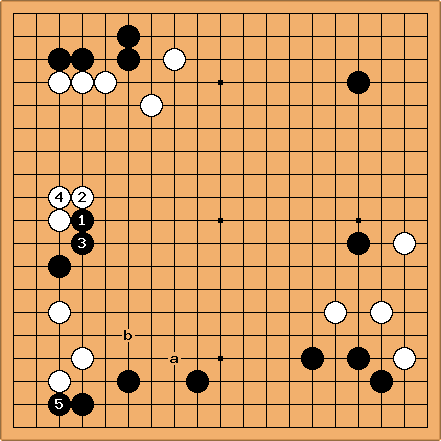 is also possible. I suspect White has no time to play at a, because Black can answer at b.

Dieter: This is more severe but Bill's idea remains more attractive to me because it puts the strain of the game with White.

unkx80: When I take another look, I think Bill's idea is better than mine.

tapir: Thanks to all for the good input. When choosing invasion points the relation to outside stones (aka escape routes) is always taken into account, I wonder a bit that the potential cutting point in the upper left doesn't feature more prominently in the considerations.

If there were a way to make or even threaten a double threat to connect or cut this would surely settle the situation in a nice way for Black. The reason why I was unhappy in the game (unshown continuation after basic settling) was that White ended up patching all weaknesses in the upper left corner position in a natural way. 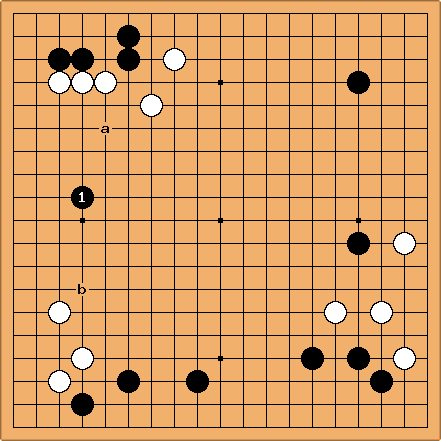 Slarty: So bascially, start here, the only move not yet mentioned. The line above the star point now seems to be the midpoint of the side.