I don't usually play for influence, and in a game I'm currently playing as Black I seem to have ended up with a fair amount. Given the board positions I don't see an obvious way to use my thickness for fighting, and if I try to make into territory it seem like playing in any of three areas works about the same. I decided to play at a as it seemed to also (modestly) put some pressure on his weakest group. I usually don't play a 2 space diagonal, but here it seemed like if he took the middle point i could cut him off. What do people think about the choices here? Also, who seems ahead? I think my position looks pretty good but my opponent is higher ranked so i wonder if I'm missing something. 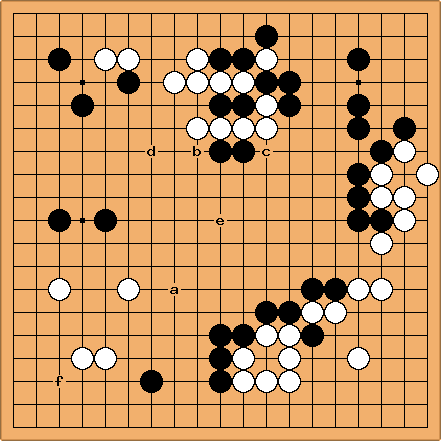 Andy: I think b is getting hosed here, but maybe the timing is right to invade at f. It's going to be tough for b to make a lot of points in the middle in my opinion.

bugcat: I applied a rough count (because I can only make a rough count :D) and ended up unsure who was ahead if play continued something like this (Diagram: Continuation from C). It looks to me that both players have a little more than a hundred points. I certainly don't think that Black was being crushed.

Dieter: with komi I count a good 80 for White (assuming both bottom corners are his) and about 45 for Black + half of his central potential which is another 20. So White is well ahead under that assumption hence Black should challenge it and invade one of those two corners (left I think), preferably gaining something in sente to target the other one. 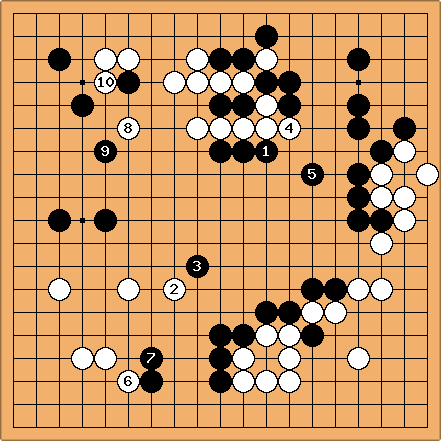 Ethelor: I put this position into KataGo on Lizzie and KaTrain and I find that white has a slight lead given that it is currently black to play in the original diagram. The corners are just a little too big inviting an invasion and Blacks center is easy to underestimate. F7 does something to reduce it but not entirely... Also, how the heck did white get E4 on the board!? That's a very strangely placed stone.