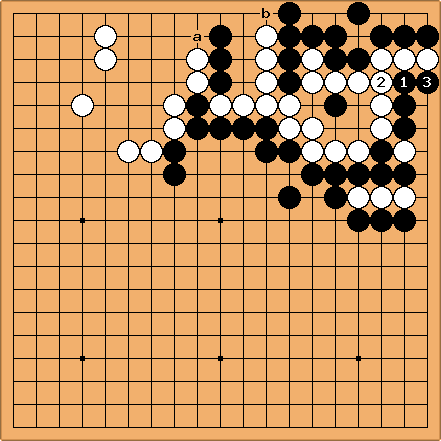 Here I was B. This is not the exact position; that started with a fight on the left where both players had unstable groups and they chased each other for miles so actually W's threatened group here has a long tail to around d8, which now has no liberties, and B's group in the center is more complex than I've shown, though now solidly alive.

Much to my surprise, W chose to tenuki on move 4. I'd have played a to resolve things.

After the tenuki, can B kill here? How? I tried the turn at a and failed to kill.

Herman: White's group is dead as long as no surrounding black stones are captured. The only ones in any danger are the three at the top. If you connect them by playing b, white is dead.