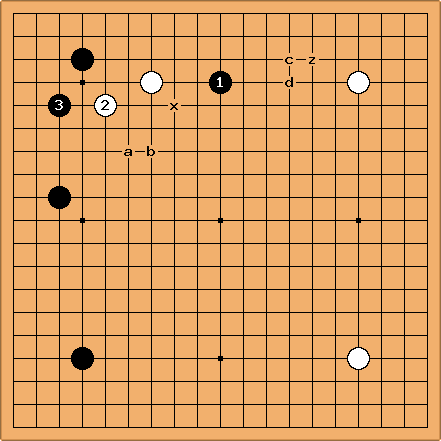 I feel uncomfortable as White, I really have to force myself to play

a move I really don't understand, giving Black territory... but of course I play it, because I know it is ok, and I want to learn about it. Then I feel I have to urgently play a counterpincer at c or d but reason keeps saying go a or b to make yourself stronger. The counterpincer certainly feels right, but after x or sth. similar next I am not comfortable at all.

Where does White play here? And most of all why?

Andy: I kind of like the suggestion (PlaysAgainstLowChineseOpening) to attach on the hoshi instead of

some of the standard reduction techniques (3453EnclosureCappingReduction) seem reasonable as a local continuation. If you're going to make black strong in the corner anyway, I would think about attaching to either black stone in the corner to make black and yourself more solid here before pincering

. a and b seem unfocused to me, as black I would respond at z and be pretty happy.

Tapir: But isn't attaching at the 3-4 stone too complicated? Below is just one variation I found in the database. The crosscut looks like necessary, and then it is instantly complicated. 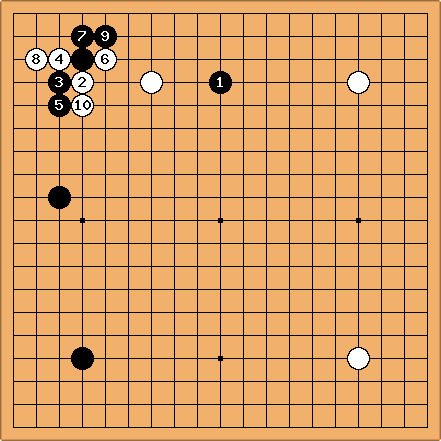 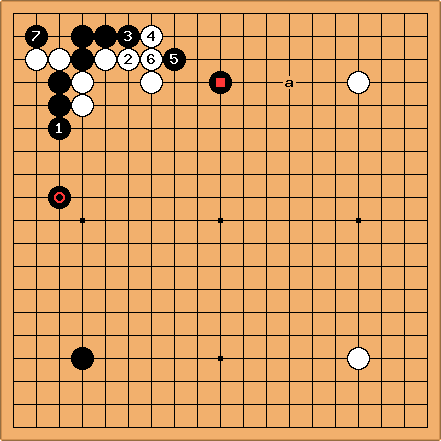 Andy: White reduced the corner, made

low and inefficient, built up some strength and has sente to attack

. Looks good to me. But where to pincer now? a, thinking to make influence and not hurt the stones on the left too much?

Uberdude: Yes, attach and crosscut is complicated, but in some ways is simpler than the original

because, by contacting, settles the shape faster and with less scope for variation. Note that kosumi instead of extend in the corner is a tesuji to leave ko aji. For example,

http://www.online-go.com/games/board.php?boardID=144596 . Up to O9 it was the same as a pro game, except the pros had exchanged a knight approach and answer at the top left earlier (would have stopped ladder we had!).

Dave: Going back to the original question. White plays 3 to force Black down to the third line for the third time in the upper left before things heat up. It is then absolutely necessary to pincer

from the upper right (e.g. "a" or "b"). Waiting for Black to start an attack before jumping out further (e.g. to "c") is the natural flow of the game. If White jumps out with

, Black naturally turns to the approach play in the upper right. White has wasted a play in the center, defending where Black is not attacking. This is nearly the equivalent of a pass. What happens next in the upper left, after White correctly counter-pincers, depends on how Black chooses to start chasing White.

tapir: I understand that I need some compensation after playing two floating stones and the only way to get it is playing a counterpincer. I recently had trouble when Black played a shoulder hit on 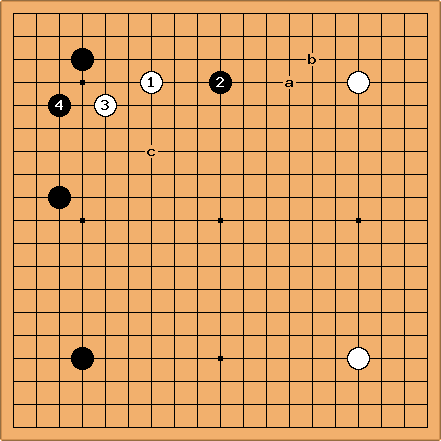 In any case, it is necessary to understand that

avoids the complications of the attachment in the corner but it invites a running fight where White sets out to: save the pincered stones, prevent Black from building too much territory on the left side, and keep pressure on the Black center stones as much as possible. This is a delicate balancing act that is perhaps more suited to the pros, or at least those who are happy mixing it up in whole-board fights. If you are uncomfortable with the pincer, perhaps

is not really what you want. 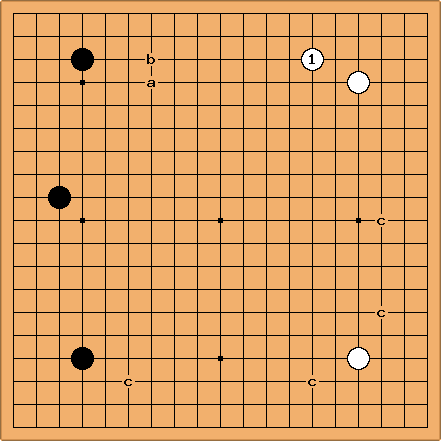 Currently the approach at "a" has been largely replaced by the low play at "b" among the pros. However, the next most frequent choice is the quiet play

. This only appeared as a real reply by White in professional play around 2004 but it has become quite popular. It is the weapon of choice against the Chinese opening for Gu Li and Xie He, for example. Black has many ways to continue (various "c" plus others), but White and Black tend to let things develop more slowly before coming to grips.

If the shoulder hit is the problem, why not ask about that in particular? --Hyperpape