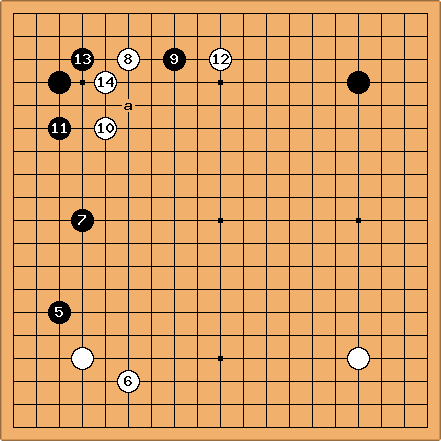 kokiri - well, if you want some unqualified opinions... I think I would usually play

as a reply is a bit of a surprise. I can see the idea - try to prevent black from taking too much territory down the right side, and the response

looks funny in relation to

, so it looks like a result. However, I think

is a bit too much. Perhaps White should be trying to settle the group directly, rather than starting a fight in black's sphere of influence... 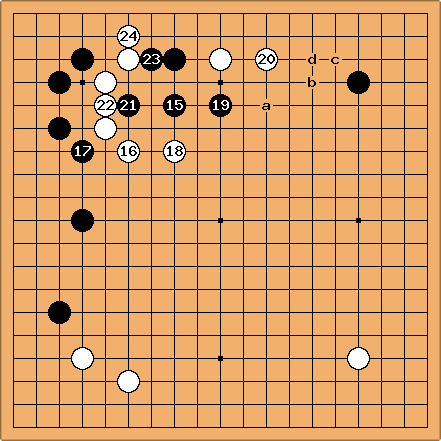 Tapir: What do you think about this game so far? I'm not convinced about my positional judgement, since after move 14 I thought black is pleased, after move 24 i (wrongly?) thought white is preferable. What next? In the game a,b,c,d in the 2nd diagram were played, but black at d looks like the right direction to play from, inducing the black group to run between two weak white ones.

, I'd much rather hold black. White has spent 7 out of the first 12 moves to build a long eyeless chain, and another two on a weak group. As black i think i would play d expecting a white jump out and then to jump myself with my weak group between the two weak groups, as you say. (just my 2 komi)

Tapir: I agree, in the game black continued from the other direction, one of the weak groups got stability by this and black was weaker than before. (A mistake in direction of play seems to be worse than anything else.) However, i had no idea how to play something else.