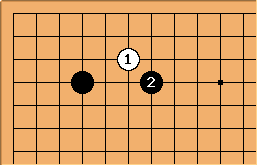 is not joseki, as far as I can tell. How does White punish this move?

HolIgor: Let us see if Black did not punish himself already.

is usually a sacrifice in order to get a corner with an exit to one of the sides. So, let us see what happens if White enters at san-san. 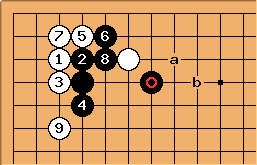 The question is now whether

In the usual joseki it is at a or b. In the latter case Black needs one more move to cap the white stone.

does not seem to be placed very well as the eye making potential of the group would be, probably better with a. 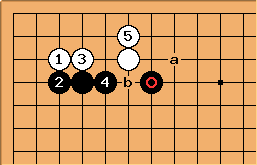 does not stop White's propagation along the top, compared to a stone at a.

is part of Black's wall (albeit with a cutting point), whereas a would not be. I'd be happy with this diagram as B, so I'm not sure White's immediate san-san invasion is good. After all, if Black plays at b now, the result is not too different from if White invades san-san after a one-space high pincer, which we all know is not recommended, because the result is so much better for Black than with the low pincer.

It seems that a stone at a is placed more efficiently. Of course, if this is not the first corner, joseki interaction with other stones might change everyting.

dnerra: Hmm, that got me interested. HolIgor, maybe Black would deviate from the second joseki as below? 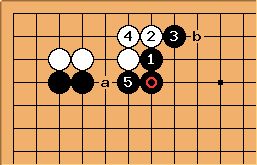 Despite the two weaknesses in his wall (a and b), I'd think this is good for Black. 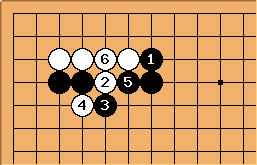 Of course, White might not co-operate, and then I will have a hard time showing that

was not an overplay... 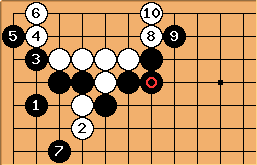 (2 in the top diagram), and then see whether

And the fight continues beyond the scope of both this diagram and this analysis :-) 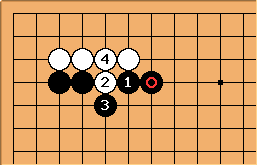 here. I don't see a good move for

to fix the shape, however. Any shape guru to comment?

Still, under special circumstances, this could still be good for Black. 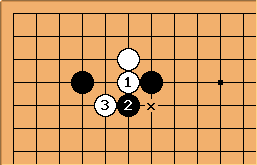 To come back to the original question: It looks very natural for me to start with

. How should Black continue?

Charles Cutting immediately at x is better for White. This is a case of the one-two-three principle.

Nando: I've never seen this move before, so I checked

gobase.org and, while it's rare, it doesn't seem to be unheard of, the professional practice. For instance : 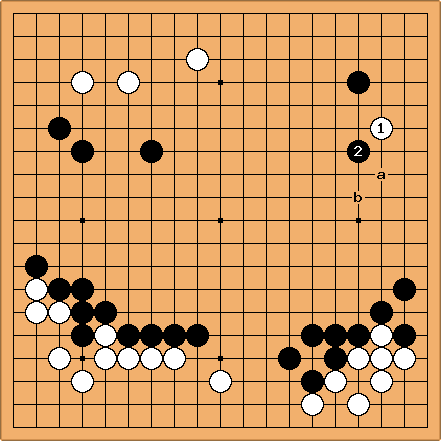 To me, it looks like a more forceful move than the pincers a or b, and possibly making a better use of Black's wall in the bottom right. 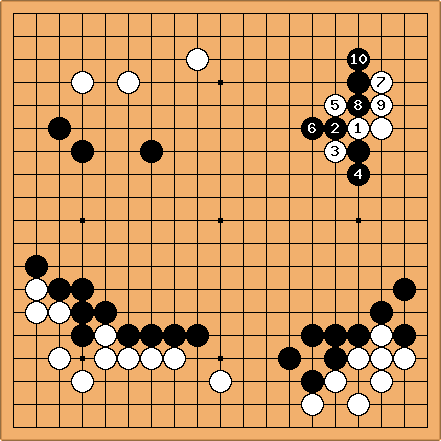 For the record, Black won by more than ten points (the center moyo remained almost untouched, solidifying in a single huge territory).

I'd conclude that this move is playable under specific circumstances (looking at a couple other games with this pattern, I suspect that the plan is to emphasize an existing strength/influence on the side where the second stone is played and in the center).

(For those with access to Jansteen's site (not everyone?) the

link to the game)

DaveSigaty: The Nihon Kiin's Igo Daijiten includes this move. The 1980 edition covers it with a total of 65(!) diagrams. A few of the key findings are shown below.

This is a non-standard move in modern go but it is not a trick play. It is obviously outside oriented so if Black can get extra value from a wall facing along the right or toward the bottom, it can be a viable choice. It appears in older Chinese games dating back to at least the 12th century AD. 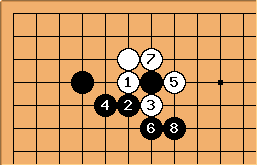 after White pushes through and cuts is one basic idea. However, it is too tame after challenging White with the fierce shoulder hit to start with.

is judged better for White who has sente. 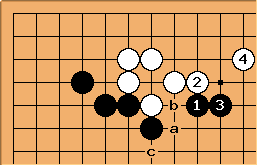 here are a special strategy to keep sente in order to play down the left side.

However, Black is clearly thin and White is threatening to start something with White a, Black b, White c later. 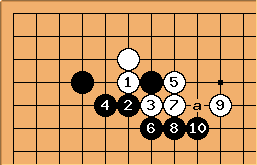 If White switches to

here, it stops Black from forcing White down as in the previous diagram; but it is a slower approach for White.

When Black pushes at

, White is unsatisfied after

because of Black's good move at

. However, if White plays at

, Black will cut immediately at a and has interesting chances. 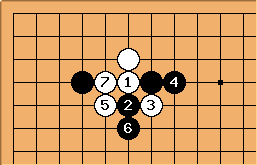 to here but after

White is set to make a lot of territory in the corner.

In the local situation White is better. However, as mentioned above, the original shoulder hit is usually based on the overall position so this may still work for Black. 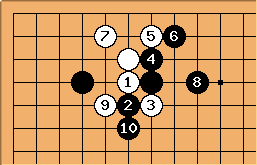 is more oriented specifically toward the top. 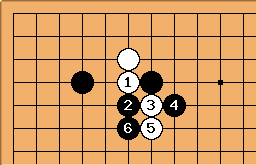 The ladders toward the lower right need to favor Black but if they do, this can lead to some heavy fighting that favors Black at least as much as White. 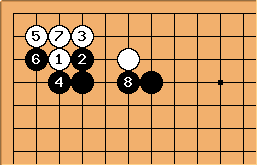 Playing into the corner is considered uninteresting.

Black's outside influence is too great after 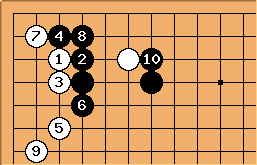 here, Black will probably reply at

are exchanged, Black will end with 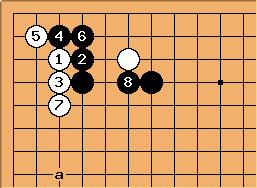 is here instead, Black plays

and waits for the opportunity to play around a, forcing White to respond in the corner.

ChessWhiz: Thank you, all, for your contributions.

Hunz: I can't find what's the best continuation for this: 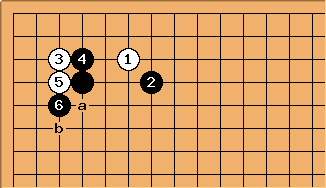 xela: This looks complicated! I wonder what happens if white plays 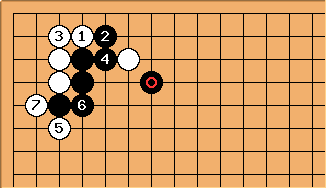 fractic: This should still work. Black probably has to give in at 6. And in the end