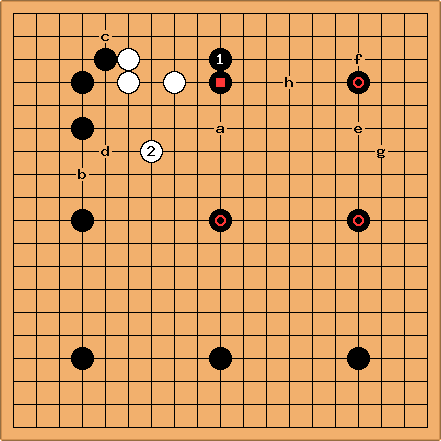 Hi, I'm Buitenland around 11 kyu on KGS and my opponent is a EGF 3 Dan. When I'm playing handicap games at the go club, many times I encounter the following situation as seen in the diagram. I'm always confused on what to play next:

at c to protect the corner.

at e. The idea is, while putting pressure on White, to make a box shape with the marked stones. Which seems a good idea to me but, due to

at b, my left side is always seriously damaged and heavy fighting occurs.

at h and either damage the right corner or give a hard time on the little formation with the square marked star stone. I could make an iron pillar with f or protect the right side with e.

Many thanks for any advice or insights.

xela: Even with a nine stone handicap, you can't expect to control the entire board. Black plays on one side, white goes the other way, that's the nature of the game. If you're looking for a magic method that will let you win without thinking, you'll be disappointed.

In this particular position, both moves a and b are reasonable for black, the difference is (as far as I can tell) mostly a matter of style.

Buitenland: I understand one can't expect to control the whole board, or that there isn't a magic method to win. I'm not looking for 'recipes' to play a game. Maybe my question was not clear enough, but what interests me is that in this stage of the game Black has several options (playing at a, b or maybe e). I understand that there is not such thing as the 'correct' play but several options with different implications, strategies or styles. Those diffferent implications are not clear to me and I would have like some insights on them. 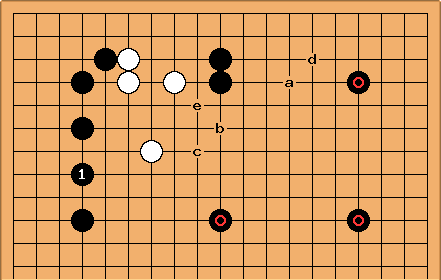 Symplicity: I'm only a 2 kyu, but I agree that either way is playable.

The important think to realize is that White is not strong yet. If white invades at a, moves like b and c come to mind as both an escape and an attack against White. Because the left is secure, black can play with a free hand on the top and the right. White has no territory and is split on a global scale, while black has a good area on the left. If white plays a move like b himself (which still gains no territory), then black gets another move to consolidate and strengthen himself. d and similar moves looks good to me, and e remains a weak point for white. 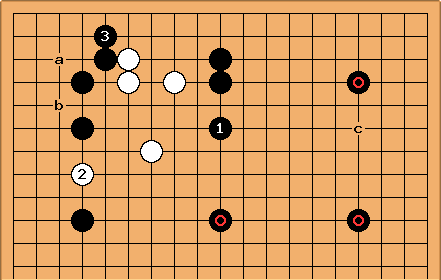 is a development of the right, at the cost of the left, and also looks fine. After

, Black has to be careful, since a and b are weaknesses/invasion points and black is getting surrounded. This is why your book recommends

next, since it more or less secures black, while White has even less of a base at the top now. Again, black is developing on both sides while white has no secure territory. If you can get sente, c is indeed a good point to build the right side.

-- Regardless of where you play, this is the kind of stuff you should be thinking about. Play moves that develop yourself while attacking the opponent. Every invasion white plays is a chance to do so. Keep white from getting a base while keeping yourself strong, or if you can't, then enclose White for outside influence. And remember that whenever white plays moves that run out to the center, they are gaining no territory yet, while your combination attack/develop responses will be.

Buitenland: I plan to make some pages with advice to play 9 stone handicap games as black. So far I've been working on Use Handicap Stones and Force White into the Center and plan to make from the above diagram a 3rd page. As I'm quite new at SL I don't know if this the right way to do it so any suggestions about that are also welcome.

xela: Different people might have different attitudes, but I would say go ahead and make whatever pages you think are useful. It's easy for other people to rename or edit your pages at a later stage. (I wonder though if it would be neater to have a main page called "Handicap go: advice for black" and make everything else a subpage of it. Otherwise a page title like "force white into the centre" could confuse people.)

Buitenland: Thanks for the advice about the mainpage. I'll create a mainpage and create subpages.