This is a position from a game I recently played at my local go-club against an opponent who is very fond of the attach-and-extend joseki?: 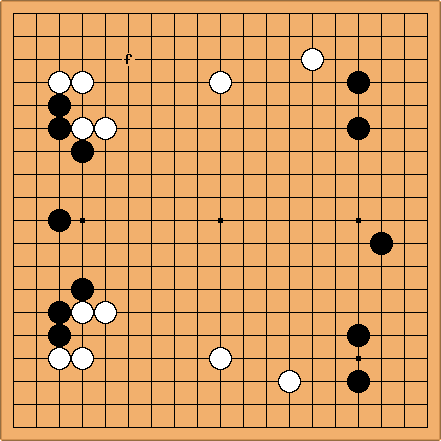 I was quite happy with my positon (playing black) as I considered the two white moyos to be easily invadable whereas black already has some territory at the left and is not too far from turing the right side into black territory as well - but I usually tend to overestimate my positions, so my question is: How do you think about this position and what should black to now?

In the game I chose to invade immediately (I always have problems with my timing) and the game continued as follows: 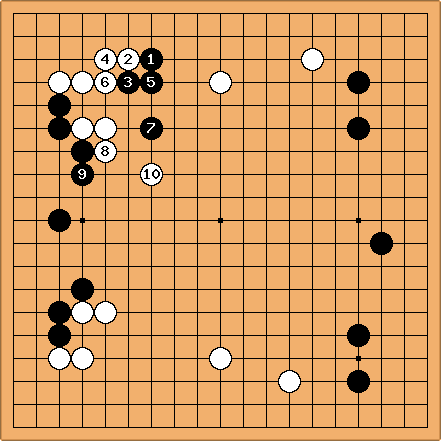 So again: Is the black invasion ok or would something else have been better? Did white respond proplerly, was

correct or should have black played above

and in particular was the solid connection at 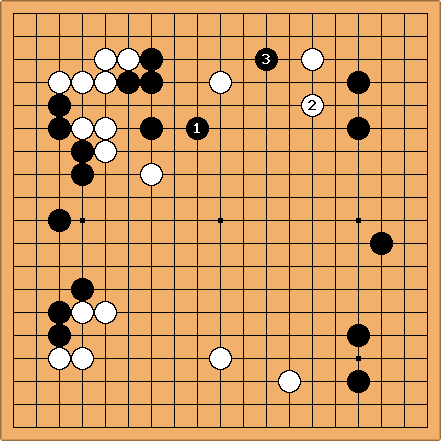 which (more or less) worked in the game but retrospectively I am not so sure anymore that this was the proper way to play ...

So could someone please shed some light on such positions, in particular I would be interested in some general advice on the timing of invasions. 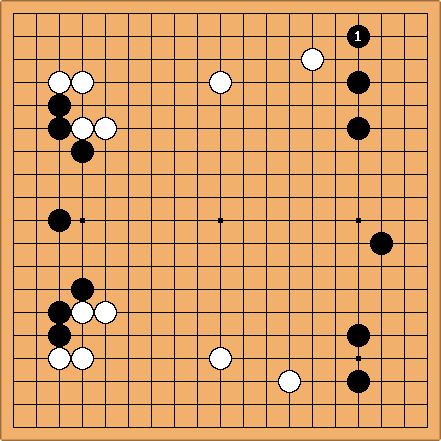 Bill: I think that Black's invasion was premature.

secures the corner and prepares to invade on top.

There is more to say, since Black's play after invading is heavy, but for a brief comment I think the idea of preparing an invasion is important to note.

xela: A principle that I find useful is that when there are two places to invade, and the opponent can't defend them both with a single move, then there is no need to invade yet. When the opponent defends against one invasion, then it is time to think about the other one. (There must be a proverb for this sort of thing, but I can't think of it right now.) 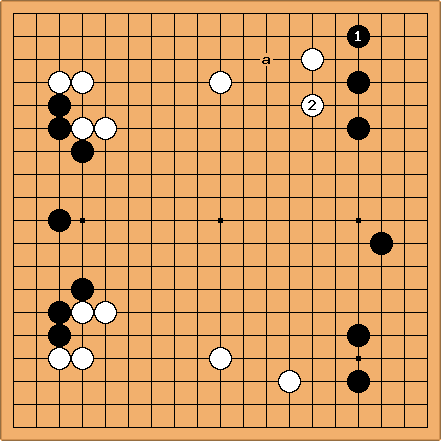 Bill: One argument against my suggestion is that White has a good reply with

, which enlarges White's framework while reducing Black's, and which makes an invasion more difficult. So Black may wish to make an immediate invasion at a.

Bill: Deep invasions are usually to be avoided, but one may be good in this case, because of the large open space. It is important, however, to avoid becoming heavy. 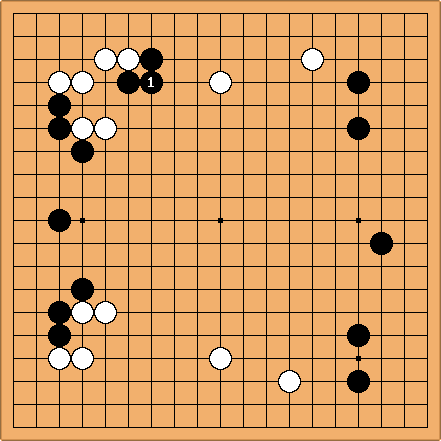 is heavy. Black has no eye shape, and sacrifice does not look like such a good option. 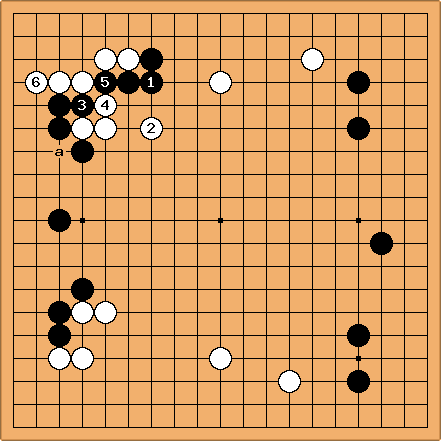 can cut, but after

Black has to worry about a cut at a. And he still has no eyes. 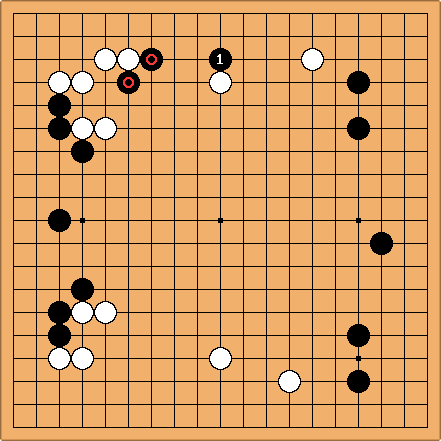 is light. There are many possibilities, including sacrificing the

stones. (Usually you should avoid deep invasions, but when you do make one, you should often sacrifice stones.) 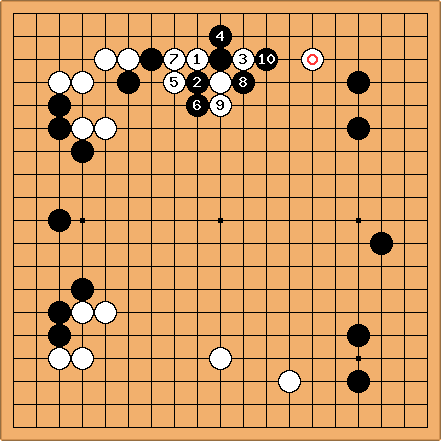 Bill: For instance, if

, something has to give. The 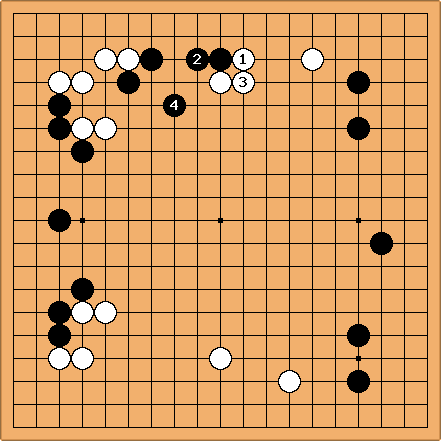 makes a base with eye shape. 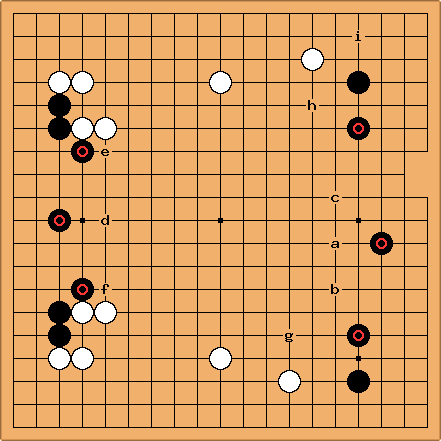 BobWhoosta: This is a complete addendum, and also off topic, but I feel it should be addressed. While the position may LOOK equal, the positioning of the

Through the course of the game, white will have options to continue flattening black (a b and c all look good on the right, while d e, and f look nice on the left). Notice that as white is high, he is more centrally oriented, and any invasion by black should create a nice position for white, which he can develop quite naturally through any of the above mentioned moves (also the obvious g and h). I think black's position actually may be superficial- as aside from i or a (which again looks overconcentrated, doing the same work twice) he has very little prospects for enlarging his territory in a natural manner- and white has the long term prospects for development. Therefore white has a nice advantage already, and may have gone beyond komi. 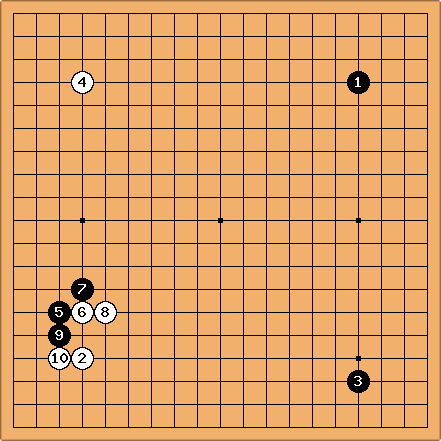 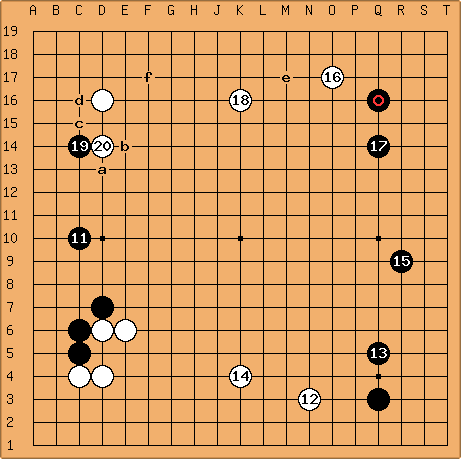 And then after the a b c d exchange we have the position originally given.

My first problem is with

. It is the first overconcentrated move.

is strong, so black should be looking to use this to develop the

stone appropriately. Therefore a pincer (either at

or e) would be the best use of space.

creates a difficulty for black.

is in such a nice position, it is hard to find a move to play. I would suggest possibly an invasion in the lower area immediately or at f (made more difficult by

), but basically ANYTHING but

!! Look at how the joseki plays out, and how the

stone is used TWICE by the formations. It's overworked, and overconcentrated. In addition, black is flat on the right. My conclusion: advantage to white.