tapir (KGS 4k): An even game. I am black. The following sequence occurred. I had a bad feeling while playing it, but didn't have any other ideas and tried to make the best of it. 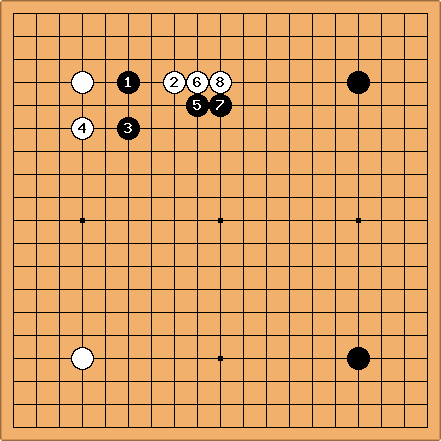 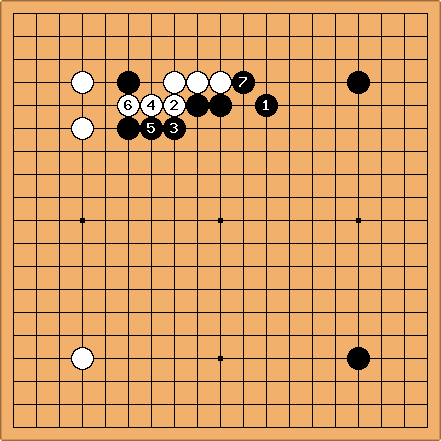 tapir: I started thinking after White 4 in the first diagram. I probably played Black 5 etc. because it resembles a sequence used with the low approach answered by a 1 space low pincer. But giving away such a big amount of 4th line territory can not be good... After the exchange of White 6 against Black 7 (in the second diagram) I felt somewhat better, finally. However there must be a better way to play for both. 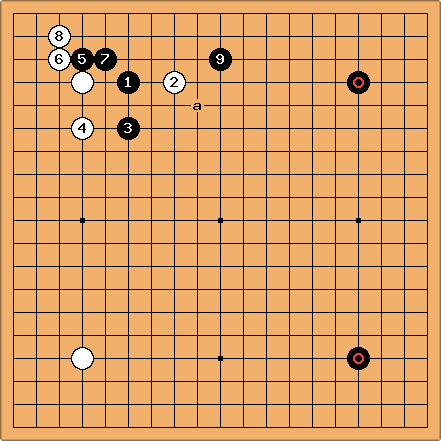 xela: In your first diagram,

(a here) looks like a mistake. My first thought is to play this way. With the marked stones on the right, a running fight should work out well for you. 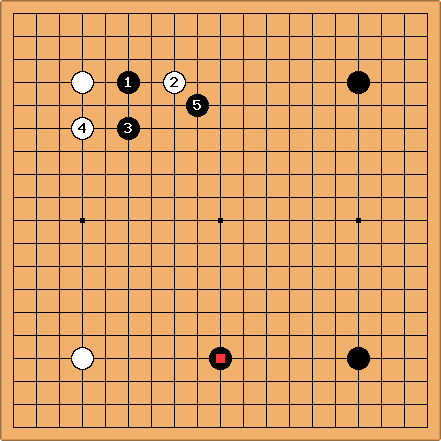 . I wouldn't play it unless I already had a high position on the lower side around

facing the future wall (or if I can finish a

sequence with the sente to play there next). 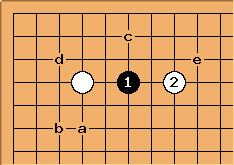 xela: A quick database search reveals that responses at a, b and c also occur in professional games. (The idea of c is that it makes miai of d and e.)

Dave: I doubt that you can find this position in any professional games. Pros do not play

in this fuseki. As far as I know it did not even appear in the shin fuseki era. Thus none of the experience with

is itself unsual and played for reasons related to the rest of the board.

in answer seems to be played only based on White stones in the upper right. Therefore, there is always some meaning to Black's responses seen in real games that do not apply here.

xela: You are quite right. I was just looking at the local position in the corner; I have changed the diagram to reflect this.

tapir: I don't know what pros play or not... But if even

is wrong or bad, i would appreciate some explanatory comment. My original idea was to build some influence toward the center and an area on the top white will feel obliged to invade etc. Although i feel the noseki played was unfavorable for Black, i'm sure allowing Black 7 is quite a big mistake as well. Since Black has still an invasion on the 3-3 point (White as well for sure) I didn't felt hopeless after this exchange (and even managed to win this game at last).

Bob McGuigan: Making a one space approach to the 4-4 point stone on the fourth line is not generally good because Black doesn't have the 3-3 point invasion. 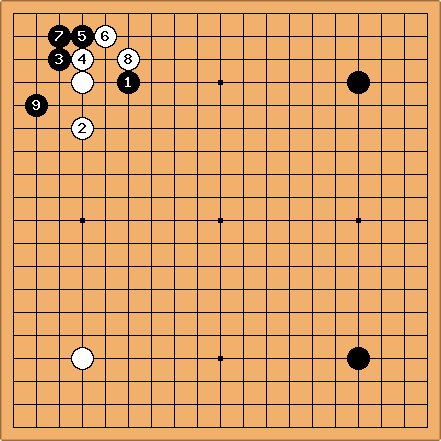 the approaching stone is hurt and White's thickness in the upper left negates any central or upper side moyo Black might have wanted to form. The 3-3 point invasion is a territorial move inconsistent with a center-oriented strategy by Black.

The following fuseki has been played many times by professionals, and so is presumably pretty close to even: 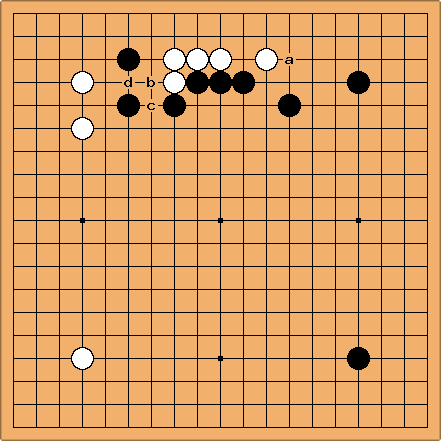 If we compare this to the one from the game, black's group along the top is not as thick and white is not closed off from the UR corner. On the other hand white has quite a bit less territory here. It's hard for me to estimate, but it looks like 20ish points difference in the UL. That is roughly 1.5 times the value of a single typical fuseki move.

So, I'd say the question is whether black's extra thickness is worth as more than an extra mov. It doesn't look like it is to me, if I picture black playing at a, the resulting thickness looks just as good for black if not better than the game variation. So, I'd place the difference as a bit less than a move - overall I'd prefer white here, but The game is certainly not over.

I think white could have done better however - the b-c-d exchange looks good in the usual joseki, but with things a line higher I think W would have done better to continue to the right pushing along the "line of victory" and then splitting the right side somewhere. I'm not much stronger than the original poster, so take my comments with that in mind. 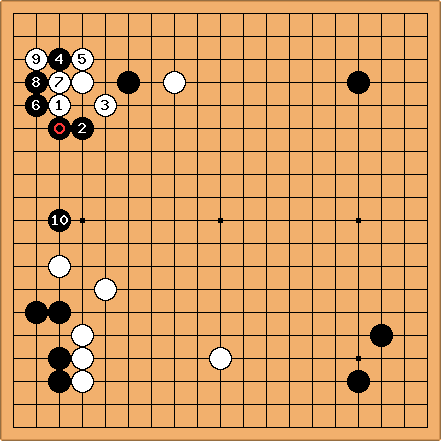 Bill: Before we are too harsh on this fuseki, here is a game between Kato Masao and Ma Xiaochun that features not only the approach, but the pincer. Black responds with a double approach at

, and then play continues through