Gresil 10 kyu: I just ran into this as white. 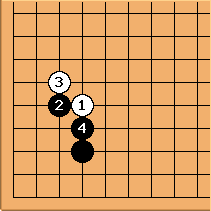 before but it seemed sensible. After the game I looked it up, but it isn't mentioned here or in Kogo's as joseki. There must be a reason for that, but I can't read anything blatantly exploitable in it. Can white benefit here?

For what it's worth, the game continued thusly (

tenuki) with the ladder good for white: 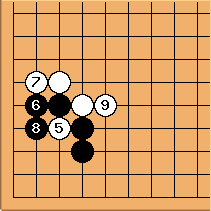 Andy Pierce: As white I'd worry that I've given black secure territory in the corner and a ladder breaker somewhere else. 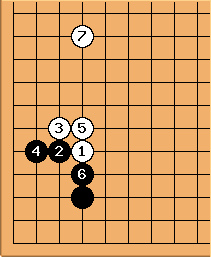 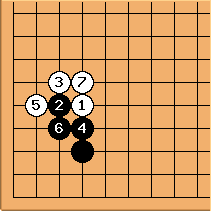 leave Black with an empty triangle.

. If black was supposed to play there but doesn't, that might suggest it is a good point for white to take instead (as in this diagram). 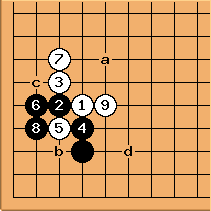 here, she can play

, then there's no ladder to worry about.

Alex: Yeah, but Black a is painful. I prefer the previous diagram, which is what I would have suggested.

unkx80: A small side note. In this diagram, I would play

at b, which lessens the effects of a White move at d later. The reason is that

makes c somewhat less urgent, since if White already played at c, White will not play at

Bill: I would play 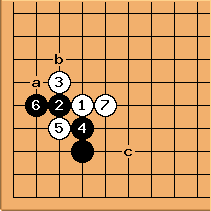 too, because it entails a local loss for White. But if

is played here without any exchanges as shown in the previous diagrams. Then if Black a, then White b, and White should be happy if Black wants to continue crawling on the second line. Alternatively, White b may be played at c. 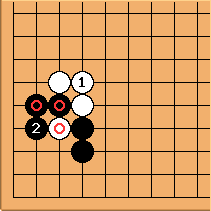 stones, and is sente. Now White has various options. (But the sacrifice of the 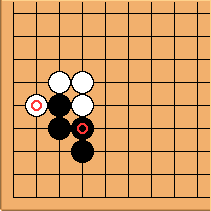 , in any tewari you ever do. It almost always will look worse than 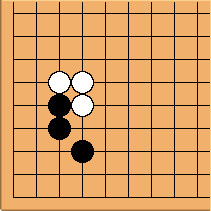 I mean, this is joseki. 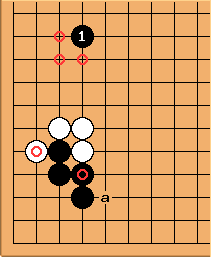 If Black's idea is to attack with

now, or at another circled point, well, yes, there is some point. White usually has some sort of sabaki, starting at a. That has gone AWOL here. 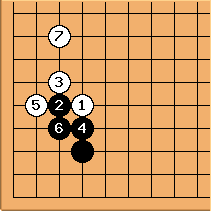 If the left side is really that important, White might want to dance away with

, or some other light play.