This game was just played on KGS between HYang 8d and Imyme 5d. As of right now, it's unresolved. There was extensive arguing, but I'm going to present it with a blank slate. 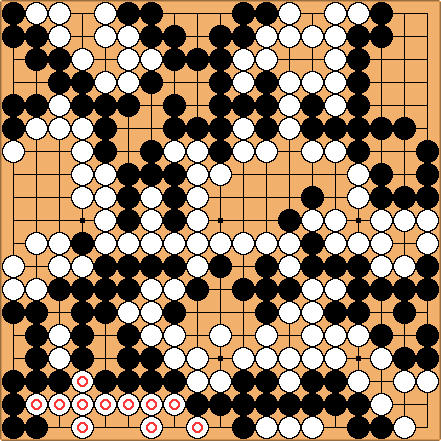 What is the status of the E2 group? Imyme called it dead, HYang rejected that.

Vincent: White is dead. After

, white needs a ko threat but since black can begin this attack whenever he wants we can assume he will have already eliminated any such threat.

gets answered by w

and White has no move, so black can play

next. As for the original question, the white stones are dead by Japanese rules, but Black would actually have to play it out (remove all ko threats etc.) by Chinese rules.

JuhoP: I'd simply say the white group is dead by Chinese rules as well (and by any reasonable rules). W can claim the group is alive and ask B to show how it is captured, but that would not change the score in any way.

DrStraw: I find it curious that a pro would question this? Why would HYang (1p) dispute it? I see no reason.

pwaldron: Purely speculation, but possibly because HYang was trained as a pro in China, playing under Chinese rules. The argument that the group is dead relies on similar logic to the Japanese bent-four-in-a-corner position (i.e. removing all ko threats first). Under the Chinese rules, such a position could be played out. By not doing so, Black would be implicitly agreeing that the White group was alive. As I said, however, this is pure speculation.

A more relvant question is why didn't the players just play out the position? Under Japanese rules, Black would lose a point for each ko threat that he has to remove, but even so he comes out with a clear win.

JuhoP: White seems to win by 2 points on the board if black has to remove the ko threats and capture the white group. But now I notice this disregards earlier captures, so I am not sure who would win.

JuhoP: I'm not sure what you find irrelevant. My comment was an answer to the suggestion that even under Japanese rules, black could just play it out and have a clear win after removing ko threats and capturing the white group. I agree with you about the correct scoring.