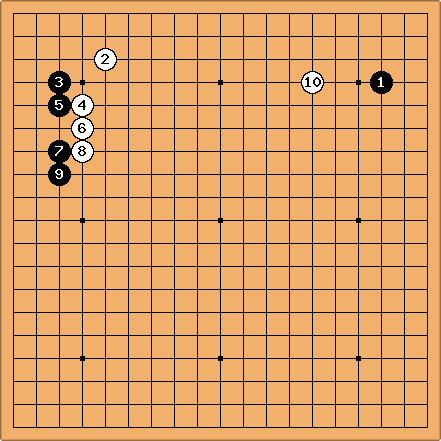 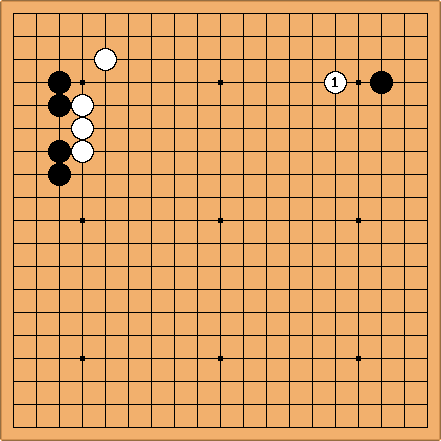 I'd say White 10 in the previous diagram was a mistake, far too timid. White's wall gives perfect support to an influential approach like White 1 in this diagram. Black's speediness to play at 3 seems a mistake. A white approach at 1 has the potential to build opposing walls if Black doesn't pincer.

If Black does pincer, the resulting pincer is within striking distance of the white thickness on the left side. The main reason I'd say Black 3 is a mistake is that White 2 exerts force towards the upper right. Playing komoku-kakari with 3 only encourages develop in this direction. White conveniantly has an approach on Black 1 in this direction which makes Blacks playing in the upper left quite dubious. --BlueWyvern

HolIgor: As I've said already, I understand almost nothing in joseki. I just scatter my stones on the board to decide later which of them to save. It the situation at the diagram with the title "Alternative approach, more aggressive" I really don't know what to play. I may play something like 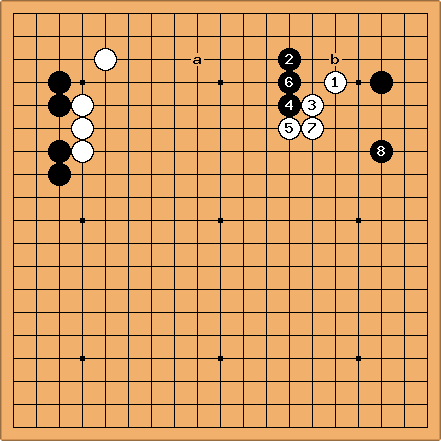 Here a and b are miai.

Alternatively I can play a distant hasami. 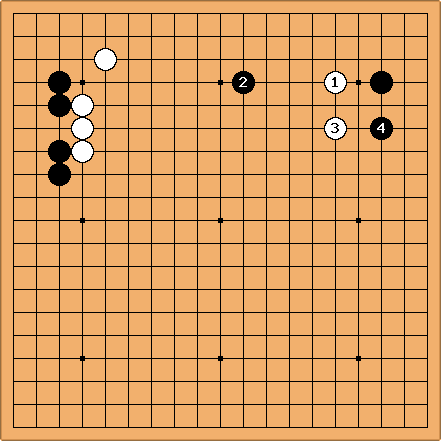 In this case I still have two baseless white groups and my unattackable light center (if you attack from one side, the other side becomes vulnerable, if you attack from above, Black doesn't have a problem spreading along the top).

It is too difficult for me to choose between these variations. 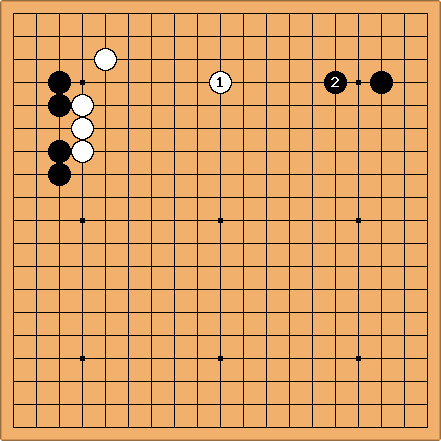 And let White build both walls of her territory. 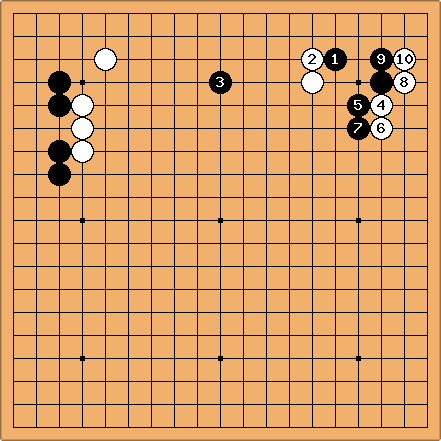 And so on: it is not difficult to see how the Big Question Mark 26 position appeared. 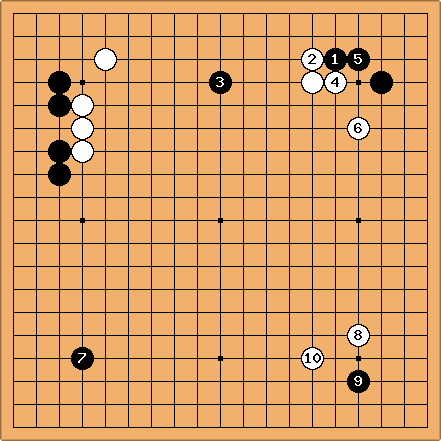 White 4 in the previous diagram shows inconsistent opening strategy. This original continuation doesn't seem to take into account the wall she has on the left side.

Here is my proposal for a better continuation for White. Say Black plays tenuki at 7, White can play 8, capitalizing on Black's tendency to invade the 3-4 point. The resulting position seems highly favorable for White. While Black has all four corners, none of his stones are casting any significant power over the rest of the board. It will be hard for him to develop further, whereas White can push Black's insecure stones around the board with impunity: they may have a hard time getting away. Also, the three-three invasion on the lower left is still open, an effective move, as White is clearly leading in the influence game and any influence gained by Black can not help him much. --BlueWyvern P.S. I'm a big fan of Takemiya Masaki and his style of play. :-)

HolIgor: Black 5 on your diagram is not going to happen. Black will play at 6. And I think White will not hurry to play at 5 in that case. Later it will become an important point.

Takemiya's style of play is based on incredible reading ability and the skill to exchange center for territory on the sides or corners later in the game. I like to review his games to see that happening. Something I overheard on IGS: "Cho Chikun's style: this is mine and that is mine too, though you don't suspect it. Takemiya is nicer. He gives people some territory. In the beginning..." 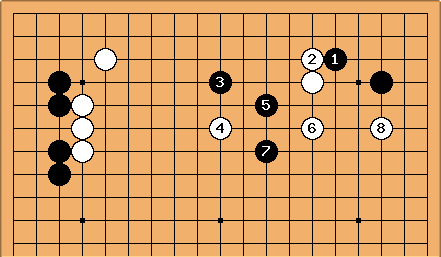 is not good. It strengthens White instead of making her heavy.

is a dual attack.