Recently me and a friend decided to shake things up in Harvard Square by playing Go amidst all the chess players. In our first game, this sequence was played out in the corner and felt nice, so when I got home, I tried to look it up, but couldn't find Black 3 in my joseki dictionary. As a result I can't shake the feeling that somewhere along the line there was something both of us missed, perhaps a move that would have made it extremely one-sided. I was playing White, so the board is replayed from my perspective. If it makes any difference, the first two moves were played on the lower edge. --BlueWyvern 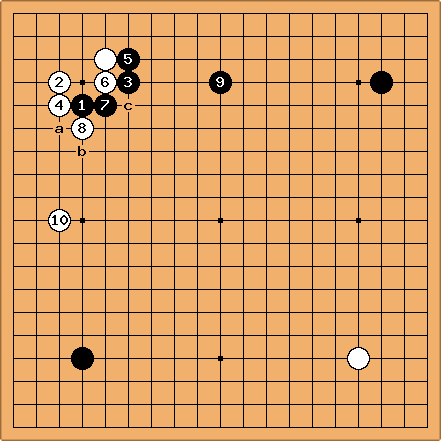 My original plan was to play along the upper side with an approach on the upper right komoku, but with Black 1, I decided to play 2 to secure the corner and see which side Black values more. Black 3 seemed like a move testing to see which side I valued more; so I pushed down the left side. Incidentally, Black 3 is the move I could not find in my joseki dictionary. Black blocked on the other side so I closed the corner then came out from under Black with 8. Black emphasizes the top with an extension, and then I extend down the left side. This seemed fairly even to me. White clearly has more profit but Black is now very strong along the upper side, and the komoku in the upper right is a lot harder to approach. Black also has sente. White has gained profit as well as strength down the left side which hampers the development of the hoshi stone in the lower left. Seems good to me. But I got an odd feeling from not finding the corner play in a dictionary. Are we missing something?

HolIgor: I definitely don't like White 8. It seems that the move does not achieve anything, especially when compared to Black 9. White spends two moves (8 and 10 to get approximately the same result). I would play very thickly at a and then a kakari in the lower left corner; or a thin b). Tenuki at 8 should be considered too, as well as the cut c.

DaveSigaty: I can never stay on the real topic so let me ask a question instead of anwering one...

Should Black 1 have been at 2 instead? I think this is an interesting question where both the upper right and the lower left are Black. Black 1 aims down the left side toward the B hoshi but since the black komoku in the upper right does not finish the corner with one move, isn't this the more urgent direction? Black 1 at 2 may not seem to look toward the upper left at first glance but by aiming more at denying White a base in the corner, I think it makes the upper side more urgent, bringing the upper right corner into the equation more. What do you think?

Meanwhile back to Blue W's original question. I would not be able to resist playing 4 at 6 and cutting immediately. 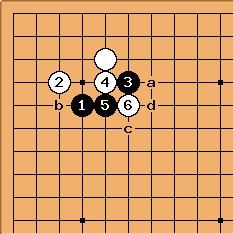 Note that the white stone in the lower right breaks any black ladder. So if Black plays a, White can calmly reply with b, if she doesn't want to start something immediately with c or d.

Fundamentally, I tend to think that if you want to play 3 here there is no good reason to play 1 first. It just asks to be cut. But once we remove the 1-2 exchange I think we can see that 3 is rather an odd choice at this stage of the game - it is too early. There is not enough development on the sides and in the corner to justify this kind of reducing move. It is going to help White solidify the corner before Black has any other stones in place to work with 3.

BillSpight: Black 1 (next) is an overplay, I think. 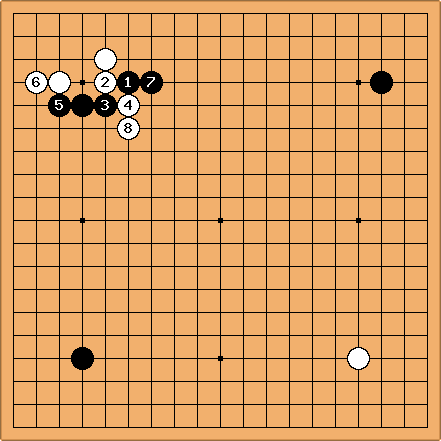 This follows a common joseki pattern. One player gets the corner and a central position, while the other player gets two groups extending along the two sides. But here White's corner is large and solid, and Black's group on the left side is weak. 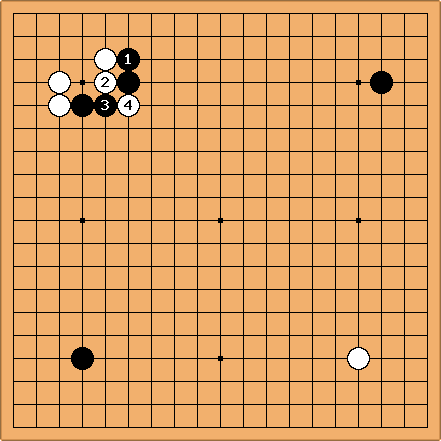 Black 1 is very, very bad. Now each of Black's groups has only three liberties. 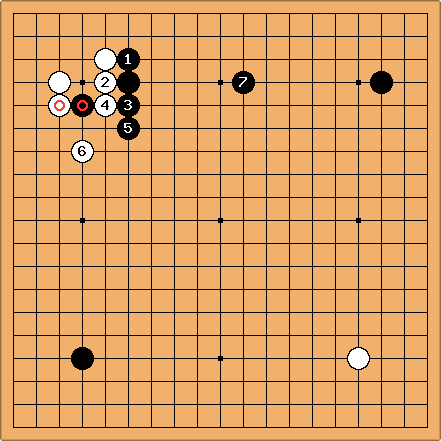 Black should just extend with Black 3, sacrificing the marked black stone for a wall. The exchange of the marked stones is bad for Black, but the game is not over. 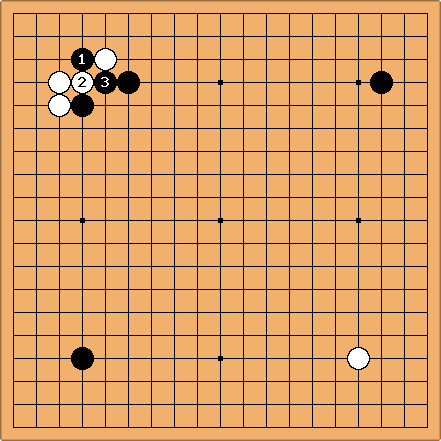 Black 1 is a tesuji aimed at building strength through a sacrifice. It looks like this sacrifice saves the day for Black. 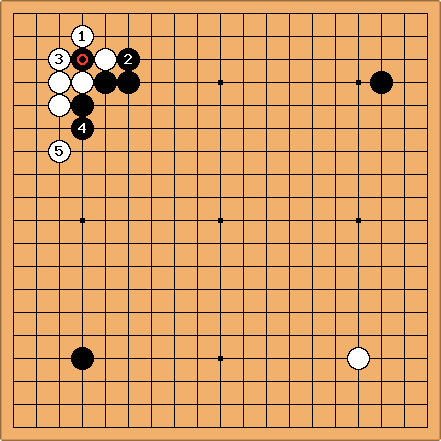 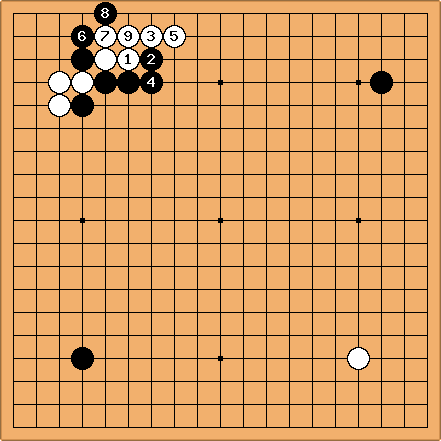 White extends into Black's upper side, but leaves aji behind. The solid connection of Black 4 is simple and strong. 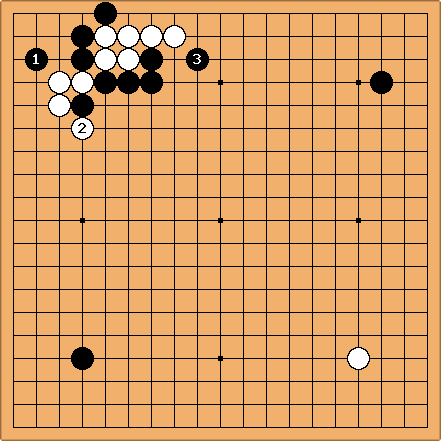 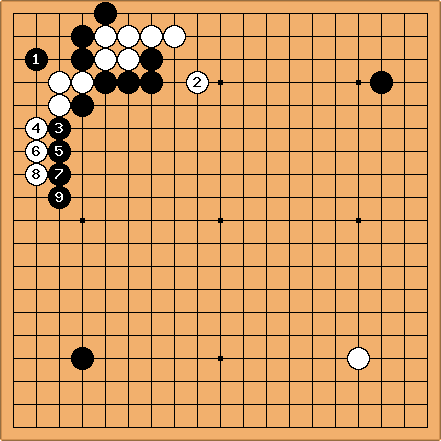 Confuseki: Looking at your game in the very top of this page, I can't help but see that White can pull black at 6 (threatening to play at 'a') to capture Black 1 (for a Ponuki or a ladder captured group). Black seems burdened rescuing that stone '1' to prevent White easily pushing into the centre. Whereas White can leave her original corner stone alone as good aji to seal off corner territory later while getting in a big move now. (i.e: Black 'b', White 'c') Honestly, Black CAN play elsewhere with 7 as long as the move is bigger that letting white make influence... 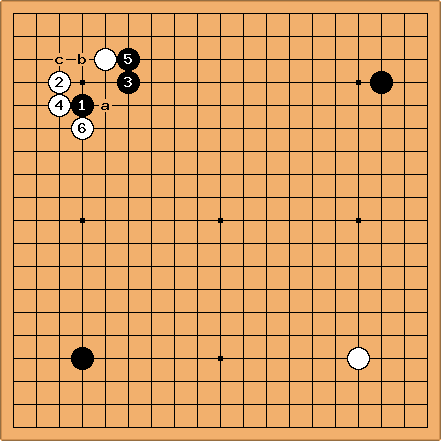