In this situation, how to invade the side?

Alex Weldon: Depends on the rest of the board. Chances are, if your opponent has played this many times on just one side of the board, you have a good position elsewhere. In that case, reduction is probably enough. That said, the points marked a are the obvious invasion points. One would like to think of them as miai and treat them as low priority. Of course, a Black move around b goes a long way towards defending both sides at once, so my opinion is that White should play on the point of symmetry himself (at b), aiming at c on whichever side B doesn't defend.

All of that said, this position probably never should arise in the first place. B would prefer his central stone to be on the third line, at d. It looks like the formation arose from a sanrensei fuseki, followed by the same joseki in both corners at the circled points. In that case, Black has horribly misunderstood the point of the fuseki he chose, while W has probably made mistakes as well.

kokiri Alex, I agree broadly with your point that, if black has played 7 moves on this side, the assumption should be that white has enough compensation elsewhere to suggest that he shouldn't really need to invade. However, I don't really like the idea of capping a star point stone in general and I don't think it's a great move in this instance. I think it's clear that the cap is a better move on the right than on the left, with the central stone low. I think that there's a danger the black can answer the cap at f, making an invasion harder on either side.

I think that the weakness of the central star point stone, versus a third line stone lies underneath it not above, and i think I recall seeing something in an old go world magazine suggesting that attaching at d is a good way to play. That said, it would have to be pretty late in the game for the benefits of an invasion and resulting small life to outweigh the resulting central strength that black gets. If i really felt that I had to invade this formation, I'd probably play at one of the a points, unless i was playing my father, when I'd definitely play at d or maybe c, just to see him squirm.

Alex Weldon: Yes, f in response to the cap is a good move. I should have thought through my response more carefully before writing. I thought about d and c and might even play them (d more likely than c) in a real game, but they somehow strike me as amateurish. However, this being an amateurish position that would never occur in a pro game, perhaps amateur approaches are what is called for. I'd also like to suggest moves around g in the case that reduction is enough. They make invasion severe enough that Black will be strongly tempted to defend, but I don't see any way for Black to defend while attacking severely, without giving White some sneaky sabaki options. If Black defends passively at a, then White has a stone in a good place to enlarge a moyo of his own on that side of the board, assuming the whole board position is appropriate. 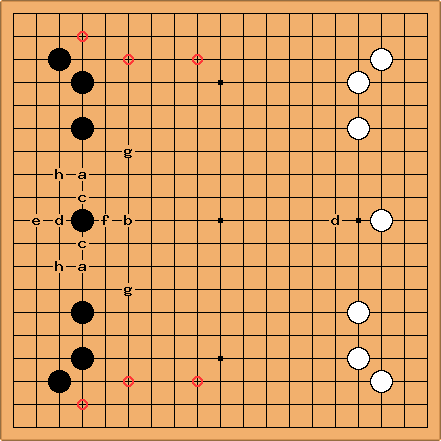 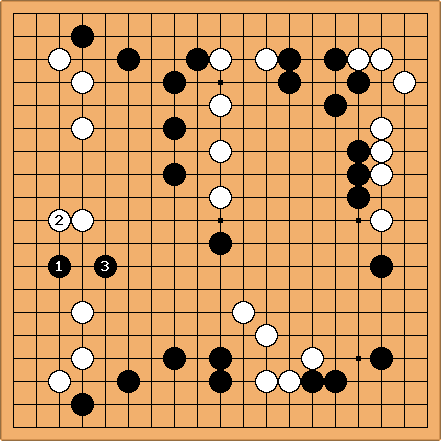 Calvin: Never say "never". So, there are actually a handful pro games that match the position on the left, and actually h is the most common invasion point, and it does occur fairly late. Simply blocking with an iron pillar at d is a possible defense. Here's one example. (Actually, besides h, invading on 4th line at a is the only other option I found. None of the others mentioned appeared, but that is not to say they are not possible. Attaching above or below the center star point at b or d are seen in positions similar but not identical to the one given. My main point is that h in the original diagram or

here is sometimes playable given outside help.) 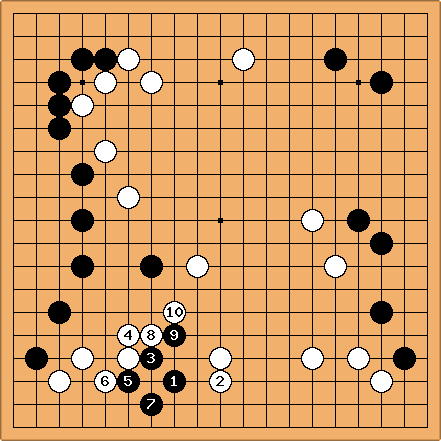 Calvin: The previous example wasn't really an invasion, however, since the invader jumps out, but here is an actual invasion, so it might be more to the point. Here, black needs some help on the outside to make these forcing moves, but this did live.